Turkish President Recep Tayyip Erdogan has vowed to clear his country's Syrian border of "terrorists" up to Iraq, expanding a current operation. Such a move would further risk alienating Turkey's allies, the US included. 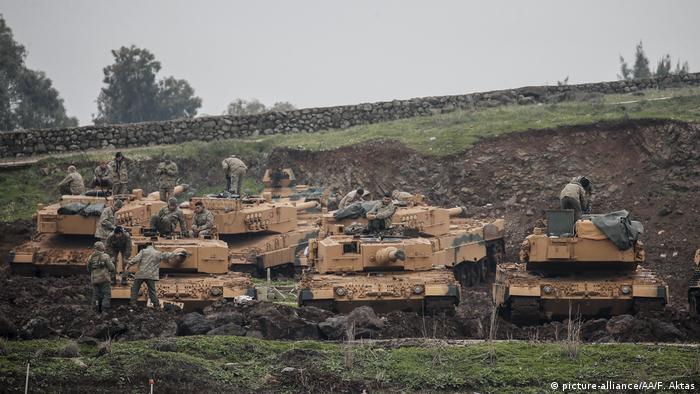 Turkey could expand its offensive against the Afrin region in Syria to other cities in the northwest of the country in a bid to rid the area of a Syrian Kurdish militia Ankara views as a terrorist group, Turkish President Recep Tayyip Erdogan said on Friday.

The move could aggravate already fraught tensions with some of Turkey's allies, notably the United States, which has been backing the Syrian Kurdish People's Protection Units (YPG) in its fight against "Islamic State" extremists.

- Turkey is carrying out an air and ground assault against Kurdish forces in Afrin dubbed "Operation Olive Branch."

- Ankara says the operation is aimed at ridding the Turkish border to Syria of Kurdish militants it considers to be allied with the Kurdish Workers' Party (PKK), which is waging an insurgency in Turkey.

- The offensive has caused diplomatic tensions between NATO allies Turkey and the US, which has been supporting the Kurdish People's Protection Units (YPG) militia in northern Syria.

- If the offensive is expanded eastward to the city of Manbij, as threatened by Erdogan, it could endanger US soldiers positioned there alongside YPG fighters.

'We will continue our fight'

Erdogan said on Friday that Turkey would continue its offensive "until there is no terrorist on our border leading to Iraq."

He added that after concluding the operation in Afrin, Turkish forces would continue to the east to "clean up" the city of Manbij, which is also held by the YPG.

Jeopardizing Syrian peace efforts: Turkey's Afrin offensive has raised concerns not only in Washington, but also in Germany and the EU, with EU foreign policy chief Federica Mogherini saying this week that the operation could "undermine seriously the resumption of [UN-backed] talks in Geneva, which is what we believe could really bring sustainable peace and security for Syria."

Why is Turkey carrying out the offensive: Ankara says it is rooting out Kurdish "terrorists" along its border with Syria with the assault, which started on January 20.

Why is it attacking the Kurds? Ankara fears that Kurdish gains in the Syrian civil war could strengthen the Kurdish minority in Turkey in its bid for more autonomy.

How many people have died so far in the offensive: There are varying death tolls emerging from different sources. The Kurdish-led Syrian Democratic Forces (SDF) said on Friday that 59 civilians and 43 fighters had been killed. Turkey says 343 "terrorists" have been neutralized, which can mean either killed or otherwise removed from combat. Turkish Health Minister Ahmet Demircan said Friday that three Turkish soldiers had been killed along with 11 allied Syrian rebels.  At least three civilians in Turkey have also been killed by rocket fire.