Afrin: Kurdish forces call on Damascus in fight against Turkey

Kurdish forces in Afrin have called for Syrian military support in their fight against Turkish-backed rebels. Any intervention from Damascus would mark a dramatic shift in alliances in Syria's seven-year-long war. 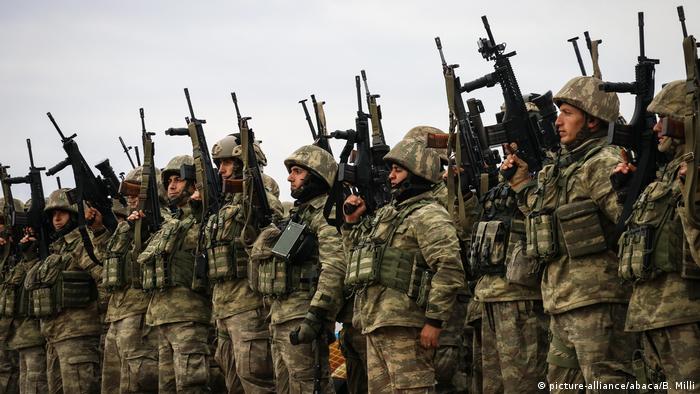 Syria's theater of war continued to grow complex on Thursday, as Kurdish authorities in Afrin released a statement calling for Syrian military support to defend them from an ongoing Turkish assault.

"We call on the Syrian state to carry out its sovereign obligations towards Afrin and protect its borders with Turkey from attacks of the Turkish occupier... and deploy its Syrian armed forces to secure the borders of the Afrin area," the statement.

Meanwhile, the co-chair of Afrin's executive council, Othman Al-Sheikh Issa, told the AFP news agency that the Syrian President Bashar al-Assad "should stand in the face of this aggression" and not "not allow Turkish planes to fly in Syrian airspace."

"We consider Afrin an inseparable part of Syrian territory," Issa said. "Any attack on Afrin is an attack on all the region's people and on the sovereignty of the Syrian state."

Kurdish authorities' latest position marks a significant step back from previous efforts to establish a sovereign Kurdish state spanning southern Turkey, northern Syria and northern Iraq. That includes the Afrin region, which has been governed by a semi-autonomous administration dominated by Kurdish parties for several years amid the absence of Syrian troops in the region.

Turkey's air and ground assault against Kurdish forces in Afrin, known as "Operation Olive Branch" has opened a new front the Syrian war and could once again lead to a shift in allegiances between warring factions on the ground or their foreign sponsors.

On Saturday, Turkey launched a cross-border offensive into Syria in a bid to crush the YPG, which it regards as a terrorist group.

The onslaught has stirred diplomatic tensions between NATO allies Turkey and the United States. The US has been supporting Kurdish YPG fighters in northern Syria in the fight against Islamist militants from the so-called "Islamic State," much to Ankara's displeasure. Unlike the US, Turkey insists that the YPG has links to the outlawed Kurdistan Workers' Party (PKK).

"We clearly told our friends and allies they should not support YPG," he said while in Brussels on Thursday. "We suggested then that we should do this operation together, but they did not do so. That's why Turkey had to do it."

Although Assad remains one of the Turkey main opponents in the region, it remains unclear whether the Syrian president will heed the Kurdish authorities' calls.

Kurdish efforts to establish their own sovereign administration within Syria's borders have long alarmed officials in Damascus as much as in Ankara. Assad has repeatedly rejected the idea of a sovereign Kurdish state and has in past threatened to crush what he calls "traitors" to Syria.

Turkey also insists that it struck an agreement with the Russian government, Assad's main backer, before launching its attack on Kurdish forces in Syria. Assad, nevertheless, has condemned Turkey's assault, while last week Damascus' Deputy Foreign Minister Faisal Mekdad warned that government forces could shoot down Turkish warplanes crossing into the Syrian airspace.