Two policemen have been stabbed, one of them fatally, in the Tunisian city of Sousse. Officers then chased down the three assailants, killing them all. Sousse was the scene of a deadly terror shooting in 2015. 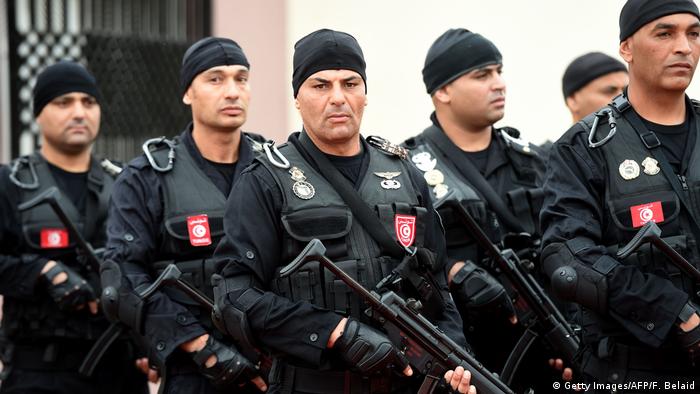 Two policemen were stabbed in the Tunisian coastal city of Sousse on Sunday, one of them fatally.

The three attackers rammed the officers with a car before knifing the victims.

Officials said security forces then chased the assailants and shot all of them dead.

Read more: The battle for jihadist domination in Tunisia

There has been no immediate claim of responsibility for the attack.

An unnamed security official told Reuters that it had been carried out by Islamist militants.

Speaking to the AFP news agency, a spokesman for Tunisia's national guard, the country's police force, said it was "a terrorist attack" without giving further details.

The other police officer is still being treated in hospital, the spokesman said.

Sousse lies 140 kilometers (80 miles) south of the capital Tunis. The city is popular with foreign tourists.

Tunisia has been hit by a string of militant attacks in recent years, many of them claimed by the extremist group, Islamic State.

An attack on a beach resort in Sousse in June 2015 left 39 people dead and 36 injured, an attack for which the "Islamic State" militant group claimed responsibility.

It came three months after a gunman had attacked the city's Bardo Museum, killing 22 people.

This latest incident follows Thursday's appointment of a new Tunisian government led by Prime Minister Hichem Mechichi, who has vowed to get tougher on terrorism.