France has joined Western voices in demanding Tunisia end the political turmoil, amid concerns over press freedom and the Tunisian opposition slamming what they have called a "coup." 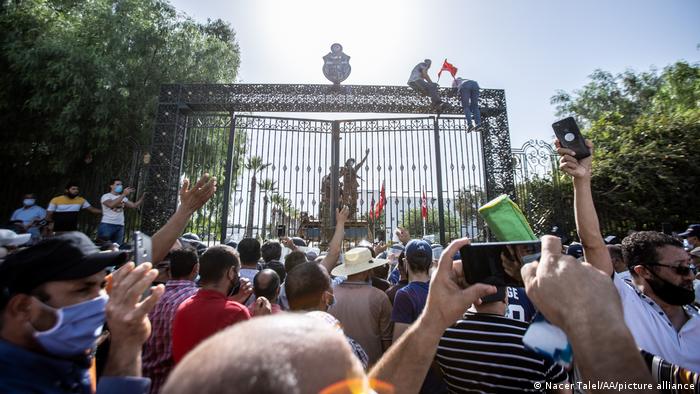 France on Wednesday called on Tunisia's President Kais Saied to rapidly appoint a new government after he assumed executive powers.

On Sunday, Saied invoked emergency powers, dismissing the prime minister and freezing parliament — a move his opponents decried as a "coup." He has since dismissed several more leading officials in politics and other institutions, most recently the head of the national public TV channel.

In a phone call, French Foreign Minister Jean-Yves Le Drian told his counterpart Othman Jerandi that it was "necessary to preserve calm, and the rule of law, and to allow a rapid return to a normal functioning of Tunisia's democratic institutions."

According to the French Foreign Ministry, Le Drian stressed "the importance of a rapid appointment of a prime minister and the formation of a government that is in a position to meet the expectations of Tunisians."

What has been the international response?

The European Union and the United States had urged Tunisia to return stability to the country as soon as possible and stick to democratic principles.

On the other hand, most Arab governments have issued statements reiterating support for the Tunisian people without criticizing or supporting Saeid's moves.

In a phone call with Saied, the emir underlined "the importance of fixing foundations of the state of institutions and establishing the rule of law in Tunisia."

Egypt has not officially commented on the situation in Tunisia. But pro-government media mostly framed Saied's move as an attempt to save Tunisia from the Islamist party with the most seats in Parliament, Ennahda, seen in Egypt as an offshoot of the outlawed Muslim Brotherhood.

After anti-government protests across Tunisia, Saied suspended parliament on Sunday for 30 days and relieved the government. His move was followed by a series of government officials' dismissals, including the defense minister.

On Wednesday, Saied replaced the head of Tunisia's national television amid calls to protect free speech.

Army vehicles were surrounding the television studios, and guests on a news program said they had been denied entry to the building.

A New York Times reporter said police had detained her for two hours when out working in Tunis. Security forces had also raided the Qatari broadcaster Al Jazeera's office in the capital. The US on Monday demanded Tunisia maintain "scrupulous respect for freedom of expression."

Meanwhile, Tunisian prosecutors announced on Wednesday that they were probing alleged foreign campaign funding and anonymous donations to Ennahda and two other political parties.

The judiciary — widely seen in Tunisia as independent from politics — said the investigation had started 10 days before the president's moves.