Tuesday afternoon's session of the Syrian peace talks in Geneva have been canceled. UN-Arab League envoy Lakhdar Brahimi revealed, however, that talks were still on course to continue until Friday. 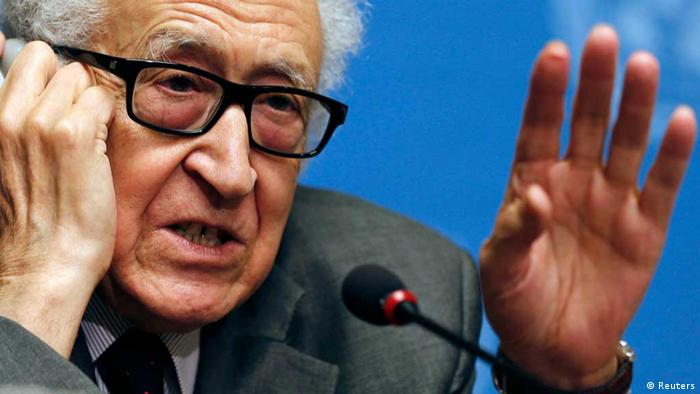 Brahimi said he decided to cut talks short "without any request or pressure from anyone." Little progress has reportedly been made at the Geneva 2 conference, launched on January 22 in Montreux..

The issue of a transitional government continues to be at the heart discussions, while the delivery of aid to the beleaguered city of Homs also remains a point of contention.

Jakal was referring to the initial round of Syrian peace talks in June 2012 in which a need for a transitional government was raised.

"There is deep resistance by the regime to move the discussions onto the question of a transitional government," he said.

A member of the Syrian opposition's negotiation team, Rima Fleihan, told news agency AFP that Brahimi had adjourned Tuesday's meeting "because the regime is not cooperating on any subject, not on humanitarian issues and not on a transitional governing body."

"There will be no session this afternoon or tonight. The next session will be tomorrow at 10 am," she said.

Brahimi himself remained confident talks would continue through to Friday, as planned: "Nobody's walking out. Nobody's running away," he told reporters on Tuesday.

"We have not actually made a breakthrough, but we are still at it, and this is enough as far as I'm concerned."

The morning talks were also marked by the tabling of a statement from Syria's government - obtained by AFP - that criticized the United States for allegedly "resuming arming terrorist groups in Syria."

"This decision can only be understood as a direct attempt to obstruct any political solution in Syria through dialogue ... Those participating in the meeting condemn this American step," read the statement, which the government wants adopted by participants at the conference.

US State Department spokesman Edgar Vasquez dismissed the accusations as "ludricrous" and said the Syrian government was guilty of "evading the core purpose of the Geneva talks."

Talks aimed at ending a bloody three-year civil war have been stilted since they began, with demands for Syria's President Bashar al-Assad's departure rejected by government representatives. Brahimi finally enticed all parties to the same negotiation table in Geneva over the weekend before talks again stalled on Monday.

The United States is also demanding that Syria's government allow aid into the rebel-held city of Homs. Assad's regime had announced it would allow women and children to leave the city and that rebels should hand over the names of men who would remain, but the US State Department rejected that alternative as inferior.

The deal to deliver aid to Homs stalled on Tuesday after the Syrian government delegation sought assurances items delivered would not enter the hands of "armed and dangerous terrorist groups."