Greek Prime Minister Alexis Tsipras has said his country will no longer take "orders" from other countries. The premier's speech to party members after parliament met for the first time was greeted with keen applause. 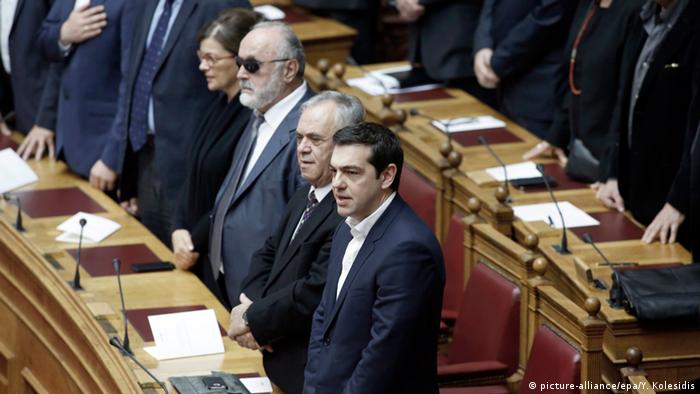 Tsipras on Thursday told members of his radical leftist Syriza party that they had already succeeded in helping Greece, and Europe as a whole, to turn the page on austerity.

"The time has come to turn the page, not just for Greece but for Europe too," Tsipras (pictured right) said after parliament met for the first time since that January 25 elections that swept his party to power.

Speaking after Greece's new parliament was sworn in, Tsipras reiterated a pre-election promise that Greece would no longer be "governed by emails sent by second-tier EU staff."

"Greece won't take orders any more, especially orders through emails," the 40-year-old leader told Syriza members, in a speech that was punctuated by enthusiastic applause. "Greece is no longer the miserable partner who listens to lectures to do its homework. Greece has its own voice."

Tspiras said Syriza would not back down from a pledge to renegotiate Greece's EU-International Monetary Fund (IMF) bailout. The party claims that austerity has stifled its prospects for growth, and says it wants to rein in public spending restrictions. 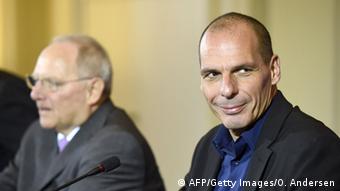 Meanwhile in Berlin, Schäuble, left, and Varoufakis couldn't even agree whether or not they had disagreed

Tsipras - back from a tour of European capitals seeking support for his ideas - has demanded an end to the troika oversight system by creditors comprising the EU Commission, the European Central Bank (ECB) and the IMF. In the short term, Athens wants "bridging" finance until it can renegotiate its debt arrangement with eurozone ministers.

"Greece cannot blackmailed because democracy in Europe cannot be blackmailed," Tsipras told his lawmakers. "We are a sovereign country, we have democracy, we have a contract with our people - we will honor this agreement."

No need for barriers

Chiming with the sentiment, some 4,000 people gathered on Thursday for an anti-austerity demonstration in Athens' central Syntagma Square - which is next to the parliament building. In contrast with previous violent protests, there were no barricades and few police.

The ECB on Thursday cut off a financial lifeline for Greek banks, no longer accepting the country's junk-rated government bonds as security for loans to commercial banks. While Greek banks will still have access to emergency lending, this would be at a much higher rate.

Meanwhile, Greek Finance Minister Yanis Varoufakis failed to find common ground with German counterpart Wolfgang Schäuble on a visit to Berlin. Varoufakis even contradicted Schäuble's contention that the pair had agreed to disagree. "We didn't reach an agreement," said Varoufakis. "It was never on the cards that we would. We even didn't agree to disagree from where I'm standing."

Following the European Central Bank's (ECB's) decision to strike Greek bonds off its list of acceptable collateral, the bank has reportedly expanded emergency funding for Greece's commercial banks to keep them solvent. (05.02.2015)