Tsipras 'optimistic' after talks with EU officials in Brussels

Greek Prime Minister Tsipras says he's hopeful of reaching a compromise with the European Union over how to tackle his country's debt woes. Tsipras is meeting with EU officials in Brussels before heading to Paris. 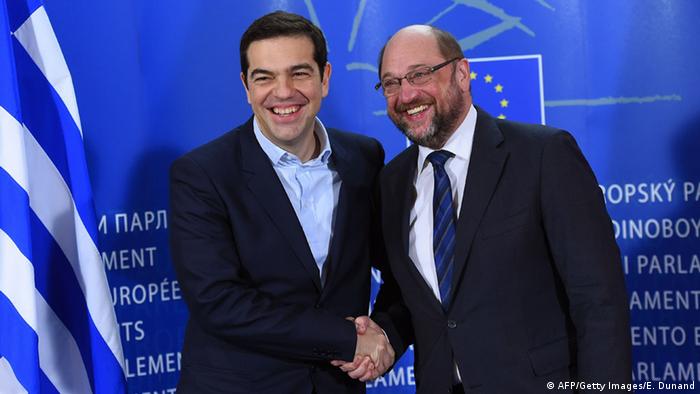 Greece's new Prime Minister Alexis Tsipras emerged buoyant from meetings with European officials in Brussels on Wednesday. His visit to the Belgian capital is the latest in a series of European trips aimed to rally support for his plans to renegotiate Greece's international bailout terms.

"I am very optimist(ic) that we will try to do our best in order to find a common, viable and mutually acceptable solution for our common future," Tsipras told a joint press conference with European Parliament President Martin Schulz, who he met along with European Council President Donald Tusk and European Commission President Jean-Claude Juncker.

Tsipras' leftist Syriza party was elected on January 25 on an anti-austerity platform, pledging to reverse many of the budget cuts that were imposed in return for bailout loans amounting to 240 billion euros ($270 billion).

Tsipras told journalists in Brussels he respected the rules of the EU, but that the goal was also "to respect the people's sovereignty in Greece and the clear mandate of our people."

"We want to recorrect this framework, not to smash this framework," he said, adding that while no decisions had been made at the meeting, "we are in a good direction to find a viable agreement."

Schulz commended Tsipras for his efforts to seek a solution, saying that although the talks were "fruitful," there was a "difficult time ahead."

Tusk stressed the need to "find a solution acceptable to all member states involved in the negotiations."

Tsipras is expected to meet French President Francois Hollande in Paris later in the day.

The European Commission, the International Monetary Fund (IMF), and the European Central Bank (ECB) are responsible for overseeing Greece's finances. The bulk of Greece's bailout loans come from other eurozone countries and from the IMF. 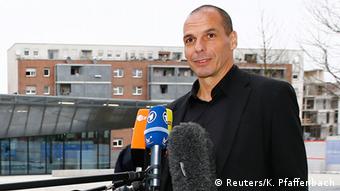 'Constructive' talks between Varoufakis and Draghi in Frankfurt

Greece's leadership is trying to convince European leaders that easing austerity and reduced debt payments are needed to kick-start the country's sluggish economy. But the bloc's more fiscally conservative members, including Germany, have thus far resisted the idea of changing the bailout deal.

'Fruitful' meeting at the ECB

While Tsipras was testing the waters in Brussels on Wednesday, Greek Finance Minister Yanis Varoufakis flew to Frankfurt for talks with ECB President Mario Draghi. After a meeting that lasted about an hour, Varoufakis told reporters the pair had had "a very fruitful discussion and exchange."

There was an "excellent line of communication, which gives me a great deal of encouragement for the future," Varoufakis said.

He has floated the idea of swapping some of the Greek government's debt for either growth-linked or perpetual bonds to alleviate pressure on Athens' funds. However, the Financial Times reported the ECB was opposed to considering such a debt swap plan.

Varoufakis is expected to meet with his German counterpart Wolfgang Schäuble in Berlin on Thursday.

New Greek Prime Minister Alexis Tsipras is continuing his tour of European capitals since taking office a week ago. He'll travel to Italy on Tuesday as he tries to build support for better bailout terms for Greece. (03.02.2015)