Greek Prime Minister Tsipras is in talks in Brussels as part of a diplomatic charm offensive to lobby for a renegotiation of Athens' debt. France is next on his itinerary. 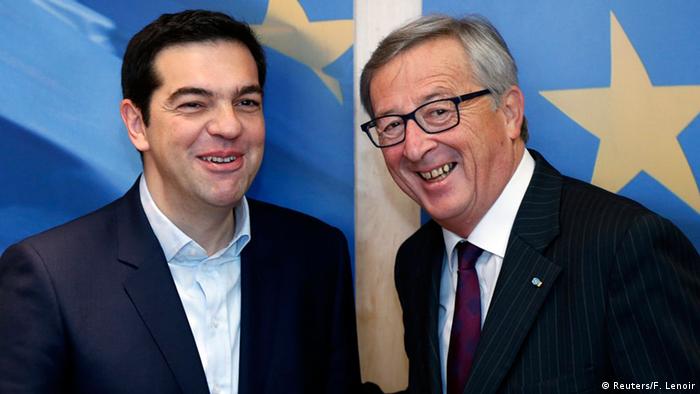 Anti-austerity Prime Minister Alexis Tsipras was welcomed in Brussels on Wednesday by European Commission President Jean-Claude Juncker. The pair went into a closed-door meeting without speaking to reporters.

Tsipras is pushing for new terms to Greece's 240-billion-euro ($270-billion) bailout, a mission that has this week seen him take his case to Nicosia and Rome.

On the eve of the talks in Brussels, Juncker emphasized that the European Union would show flexibility in helping Greece deal with hundreds of billions of euros in foreign debts, but ruled out wholesale policy changes.The European Commission is one of the three main institutions supervising Greece's finances.

Tsipras, of the left-wing Syriza party, was elected last month on a pledge to ease austerity and renegotiate Greece's debt. He is later scheduled to hold talks with European Council President Donald Tusk, before heading to Paris to hold talks with a fellow critic of austerity, French President Francois Hollande.

An ally in Rome

During Tsipras' visit to Rome on Tuesday, Italian Prime Minister Matteo Renzi said that he believed Athens would be able to strike a deal with the EU over its sizeable debts, that Italy would be ready to "listen and discuss" options.

"I believe the conditions exist to find an accord with the European institutions," the center-left leader Renzi said at a press conference, before joking that the election of Tsipras was a "blessing" because it ensured he was no longer branded as Europe's number one "dangerous lefty."

At the same press conference, Tsipras pledged to maintain balanced public finances and said his government needed time to prepare reforms to get the economy going again.

"There has to be change in Europe," he said. "We have to put social cohesion and growth before the policies of poverty and insecurity."

Meanwhile, Greek Foreign Minister Yanis Varoufakis on Wednesday was expected to meet with European Central Bank (ECB) President Mario Draghi in Frankfurt. He has floated the idea of swapping some of the government's debt for either growth-linked or perpetual bonds, with a four-month bridging program under which the ECB would keep Greece's financial system afloat.

"We will use all the means at our disposal to reach our target, and that target is to reduce the debt ... (regardless) of the name and euphemisms it is given to make it more digestible," Varoufakis said late Tuesday.

He said the proposal would be put to eurozone finance ministers next week ahead of a summit of EU leaders.

The ECB is reportedly opposed to the request for bridging finance, a stance that could result in Athens running out of funds by the end of February.

Greece has to strike a deal with creditors by the end of June. If it fails to do so it will be unable to pay back 7 billion euros ($8 billion) worth of bonds maturing in July and August.

Germany is the eurozone's largest economy, and has so far resisted Greece's calls for a new debt agreement. German Chancellor Angela Merkel has thus far remained non-commital on the Greek proposals, saying it was clear that Athens was "still establishing its position."

"We await their proposals and there will be time enough to discuss them," she said.

Varoufakis is expected to meet with his German counterpart Wolfgang Schäuble in Berlin on Thursday - a meeting that is widely seen as a test of whether his proposals have a chance of being accepted by leaders in the European Union.

New Greek Prime Minister Alexis Tsipras is continuing his tour of European capitals since taking office a week ago. He'll travel to Italy on Tuesday as he tries to build support for better bailout terms for Greece. (03.02.2015)

This week, Greece is meeting with EU leaders in a bid to find support for a renegotiation of its crippling debt. Part of the solution will be to end its addiction to borrowing for now, says its finance minister. (02.02.2015)