One week after a police officer shot and paralyzed a Black man, President Trump said he will travel to the Wisconsin city to talk to law enforcement officers. Over 1,000 people have joined anti-racism protests. 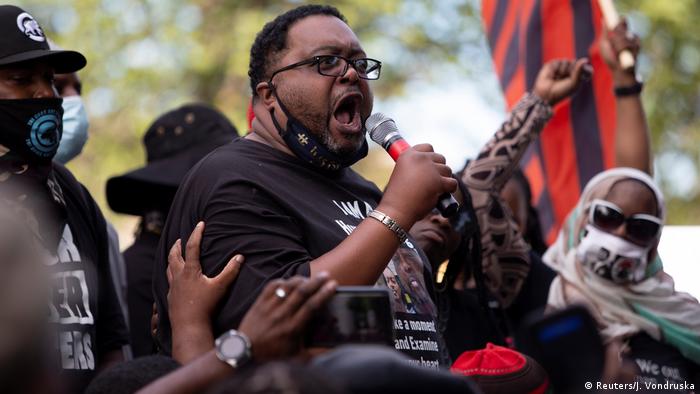 Jacob Blake's father speaks to the crowd in Kenosha

US President Donald Trump confirmed on Saturday that he will visit Kenosha, Wisconsin, on Tuesday. The city has seen protests and unrest since a white police officer shot and grievously wounded a Black man one week ago.

Trump will meet law enforcement officials and assess damage from unrest in the city, the White House said.

Jacob Blake, a 29-year-old Black man, remains in hospital, paralyzed from the waist down after he was shot in the back by a police officer during an arrest.

A 17-year-old boy is also being held by authorities on suspicion of shooting three people who were protesting the shooting of Blake.

A crowd of around 1,000 protesters gathered outside the Wisconsin courthouse on Saturday chanting "Seven bullets, seven days" in reference to the number of times Blake was shot last Sunday.

National Guard reinforcements attended the rally to prevent a resurgence of the violence that has rocked the city during the week.

Blake's father made an impassioned plea for the protests to remain peaceful.

"Good people of this city understand. If we tear it up, we have nothing," Jacob Blake Sr. told the crowd.

Many protesters also held up Black Lives Matter signs. Anti-racism and anti-police brutality demonstrations have swept the US all summer since the killing of unarmed Black man George Floyd in police custody in May.

March on Washington 2020: History in the making

On the anniversary of Martin Luther King's "I have a dream" speech, Washington saw another racial justice protest. People from across the US heard a clear message: If you want change, vote! DW's Carla Bleiker was there.

The suspect was charged with fatally shooting two protesters and wounding a third during protests in Wisconsin. Among others, he faces charges of first-degree intentional homicide — the most serious crime in the state.