Donald Trump has pardoned two Army officers accused of war crimes, one of whom was still set to stand trial. The US president also restored the rank of a Navy SEAL convicted of posing with a dead "Islamic State" captive. 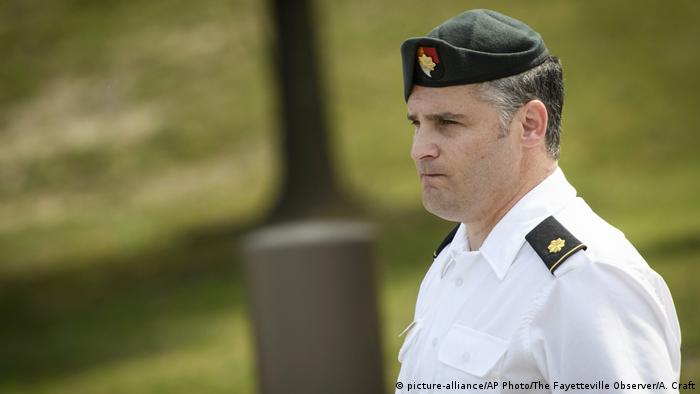 Mathew Golsteyn, a former Army Special Forces soldier, was pardoned before he stood trial by court-martial

United States President Donald Trump has pardoned two US Army officers accused of war crimes and restored the rank of a Navy SEAL platoon commander who was demoted for actions in Iraq, the White House said in a statement on Friday.

The Trump administration said the US president, who also holds the title of Commander in Chief, granted full pardons to First Lieutenant Clint Lorance and Major Mathew Golsteyn. Trump also ordered the promotion of decorated Navy SEAL Edward Gallagher, who was convicted of posing with a dead captive from the "Islamic State" (IS) militant group in 2017.

"For more than 200 years, presidents have used their authority to offer second chances to deserving individuals, including those in uniform who have served our country," White House press secretary Stephanie Graham said in a written statement. "These actions are in keeping with this long history."

Lorance was convicted of murder for illegally ordering the fatal shootings of two unarmed Afghan men in July 2012. He has served more than six years of his 19-year sentence.

Trump's pardon of Golsteyn, a former Green Beret, came before he was set to stand trial by court-martial, accused of killing a suspected bomb-maker in 2010 while deployed in Afghanistan. His trial had been scheduled for December but was postponed until February 19 to give attorneys more time to prepare.

In a statement Friday, Golsteyn said his family is "profoundly grateful" for Trump's pardon.

"We have lived in constant fear of this runaway prosecution. Thanks to President Trump, we now have a chance to rebuild our family and lives. With time, I hope to regain my immense pride in having served our military," he said in the statement.

Golsteyn's defense attorney, Philip Stackhouse, said he was "confident we would have prevailed in the trial, but this action by the President expedited justice in this case."

Gallagher, a decorated SEAL platoon leader, was accused of committing various war crimes while stationed in Iraq. In July, a military jury acquitted him of murdering an IS captive by stabbing the prisoner in the neck. However, Gallagher, who was in line for promotion, was convicted of illegally posing with the captive's corpse and was demoted from the rank of chief petty officer to first-class petty officer.

Timothy Parlatore, one of Gallagher's attorneys, said after the ruling that Gallagher's conviction cost him up to $200,000 (€181,000) in retirement funds because of his loss of rank.

On his Instagram page, Gallagher expressed his appreciation for Trump ordering the promotion, saying he believes "that we are blessed as a nation to have a Commander in Chief that stands up for our warfighters, and cares about how they and their families are treated."

A Pentagon spokesperson said the US Department of Defense has confidence in the military justice system, saying that the president "has the authority to weigh in on matters of this nature."

US Defense Secretary Mark Esper told reporters last week that he had a "robust discussion" with Trump over the cases. He declined to provide any details but said, "I do have full confidence in the military justice system and we'll let things play out as they play out."

The American Civil Liberties Union criticized the president's decision, saying the actions were an "utterly shameful use of presidential powers."

"Trump has sent a clear message of disrespect for law, morality, the military justice system, and those in the military who abide by the laws of war," Hina Shamsi, the director of the ACLU's National Security Project, said in a statement.

Donald Trump's 'absolute right to pardon myself' does not exist

Contrary to his claim, the US president likely does not have the right to pardon himself, according to constitutional experts. But the key question is whether Congress would let Donald Trump get away with it anyway. (05.06.2018)

Donald Trump claims he has 'complete power' to pardon

The US president has said he has the authority to pardon people in his administration, possibly including himself, but legal experts beg to differ. Meanwhile, Russian-meddling probes are closing in on Trump's finances. (22.07.2017)