The changes could allow for capital punishment by firing squad or poison gas instead of lethal injection. Critics say Donald Trump is trying to rush through tougher punishments before he leaves office. 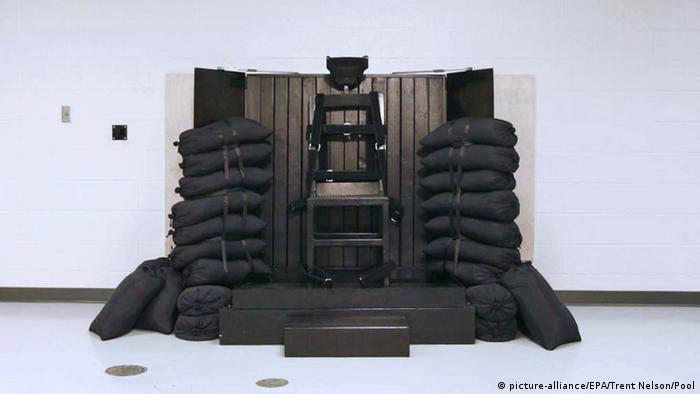 US President Donald Trump is paving the way for additional methods of executing prisoners who have been sentenced to death in the United States, according to new government documents.

The US Justice Department has amended the rules on federal executions, which would allow death by firing squads or poison gas, according to a document published in the Federal Register on Friday.

The paper says the US government can conduct an execution by lethal injection or "use any other manner prescribed by the law of the state in which the sentence was imposed."

Some US states already allow other methods of execution, including electrocution, inhaling nitrogen gas or death by firing squad. It remains unclear whether the Justice Department will seek to use any methods other than lethal injection for federal executions in the future.

The rule — which goes into effect on December 24 — comes as the Justice Department has scheduled five executions during the lame-duck period, including three just days before President-elect Joe Biden takes office.

A Justice Department official told The Associated Press (AP) that the federal government "will never execute an inmate by firing squad or electrocution unless the relevant state has itself authorized that method of execution.”

The official said two executions scheduled in December would be done by lethal injection but did not provide information about three others scheduled in January.

The change is likely to set off intense criticism from Democrats and anti-death penalty advocates, as the Trump administration tries to push through several rule changes before Trump leaves office.

A spokesperson for Biden told the AP earlier this month that the president-elect "opposes the death penalty now and in the future” and would work to end its use. But he did not say whether executions would be paused immediately once the Democrat takes office.

The US government restarted federal executions this year after a 17-year hiatus. All states that use the death penalty allow lethal injection — and that is the primary method in all states where other methods are allowed, according to data compiled by the non-profit Death Penalty Information Center.

Before the Trump administration resumed executions this year, the federal government had put only three inmates to death since 1988.

Lisa Montgomery, who was found guilty of murdering a pregnant woman in 2004, is set to be executed by lethal injection in December. Six people have been put to death since the US resumed federal executions in July.

Amy Coney Barrett, a 48-year-old conservative jurist, has been facing a third day of questioning at the US Senate. If confirmed, she would replace the late Ruth Bader Ginsburg, who died last month.

Ex-members of Eddie Gallagher's elite commando unit who served in Iraq have described him as "freaking evil" and "toxic" in a leaked video. The platoon leader was controversially pardoned by the US president.