The US has carried out its seventh federal execution since July, lethally injecting a Black inmate two decades after he killed a young Christian youth outreach couple. Lawyers claimed racist bias had swayed sentencing. 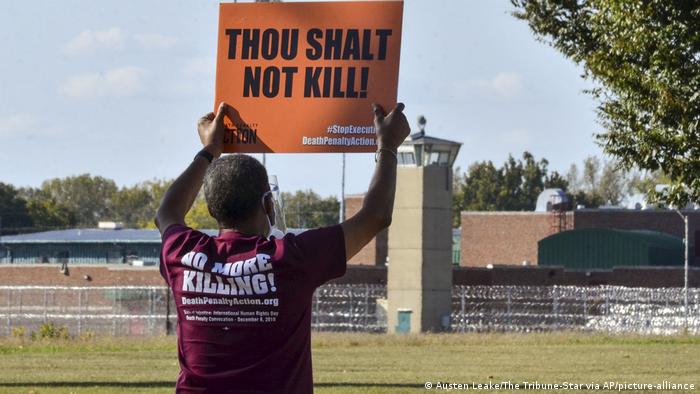 The US government executed Christopher Vialva, the first Black inmate put to death as part of the Trump administration's July resumption of federal executions that ended a 17-year hiatus.

Thursday's execution came as the US grappled with racial disparities in its criminal justice system, with people taking to the streets across the US to protest against police brutality and racism. Of the 56 people on federal death row, 24, or almost half, are Black.

Black people make up only 13% of the US population.

At Vialva's trial in 2000, a jury comprising 11 white people and one Black person found him and an accomplice guilty of carjacking and murder. The jury sentenced them both to death.

The accomplice's execution has not yet been carried out.

Prosecutors had said that Vialva, then 19, accompanied by gang affiliates, had staged a carjacking in Killeen Texas, killing Stacie and Todd Bagley in their car trunk by shooting them and then setting the vehicle on fire.

The Bagleys had pleaded for their lives while locked inside.

Vialva, in a video recording released by his lawyers Thursday, admitted to committing a "grave wrong" in killing the couple who at the time had been driving home from Sunday worship.

Post-trial lawyer Susan Otto said Vialva's victims were "lovely people," asserting though that Vialva was not a full-fledged gang member and that prosecutors had "played into the narrative that he was a dangerous Black thug."

"Race was a very strong component of this case," said Otto.

Under Trump, said the DPIC, the federal Justice Department had executed twice as many men this year than all of his predecessors combined going back to 1963.

Vialva's death Thursday marked the most executions within a single year by the US government since at least 1927, the oldest year of records in DPIC's database compiled.