A 2016 meeting between some of Donald Trump's team and a Russian lawyer has been deemed relevant to a probe over possible links between Trump's election campaign and Russia. The lawyer denies any Kremlin connections. 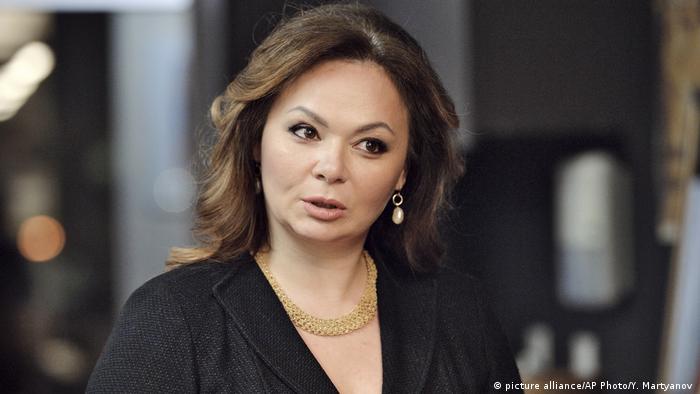 US special counsel Robert Mueller on Friday sent a document preservation request to the White House, saying that a meeting Donald Trump Jr. had with Russian lawyer Natalia Veselnitskaya was relevant to an investigation into possible links between his father's campaign team and Russia. Donald Trump Jr. has been called to testify before the Senate Judiciary Committee

The Senate Judiciary Committee has called for Trump Jr. and Manafort to testify next Wednesday at a public hearing which is part of its Russia investigation. In a statement on Friday, the committee said Trump Jr. and Manafort had agreed to negotiate with the panel over whether they would be interviewed by committee members and over documents it was seeking.

The House of Representatives Intelligence Committee said it would interview Kushner on Tuesday.

President Donald Trump's eldest son met Veselnitskaya after he was told she might have damaging information about Democratic candidate Hillary Clinton.

Veselnitskaya (pictured above) posted a link on her Facebook page on Friday reacting to the allegations made by the news agencies: "Is that all your proof? You have disappointed me," she wrote.

"Dig in court databases again! You'll be surprised to find Russian businessmen among my clients," she wrote.

"Do not waste time, simply. Take care of business," she continued on Facebook, adding that she also had US citizens as clients.

Veselnitskaya has denied having had anything to do with the Kremlin and said this week she was ready to testify before US Congress to dispel what she called "mass hysteria" about the meeting with Trump Jr. last June.

Dmitry Peskov, a spokesman for the Kremlin, said on Friday that Veselnitskaya had "nothing whatsoever to do with us."

If proven, Veselnitskaya's contacts with the FSB - the successor to the Soviet-era KGB - could add to concerns the Trump 2016 campaign team may have colluded with the Kremlin in its apparent bid to help tip last year's US presidential election in Trump's favor.

A US-based employee of a Russian real estate company - Ike Kaveladze - was named last week as the eighth participant in the June 2016 meeting. He reportedly attended as a representative of Aras and Emin Agalarov, Russian developers who hosted the Trump-owned Miss Universe pageant in Moscow in 2013.

In another development on Friday, the Washington Post reported that Attorney General Jeff Sessions did discuss campaign-related and policy matters with Russia's ambassador in Washington. If confirmed, this would be contrary to his prior testimony.

And, in a further change of personnel at the White House, Mark Corallo, who has been coordinating the Trump legal team's public response to the Russia case, announced to AFP news agency on Friday that he was stepping down.

This came on the same day an announcement from the presidential press secretary, Sean Spicer, that he, too, was leaving his position.

US President Donald Trump's son reportedly met with a Russian lawyer during the 2016 election campaign to gather information about Hillary Clinton. The meeting raises questions about collusion with Russia. (10.07.2017)