Trump-Buhari state meeting: A chance to mend the US-Nigeria relationship?

The meeting comes shortly after Trump's unflattering comments concerning the African nation. It's likely the US will attempt to rebuild trust, while Nigeria has the chance to promote itself on the world stage. 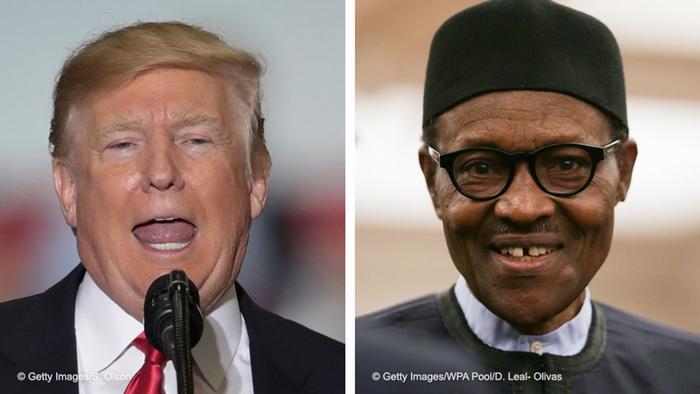 Nigerian President Muhammadu Buhari is set to meet US President Donald Trump in Washington on Monday.

The meeting marks the first time President Trump has hosted an African president at the White House after over a year in office. However, Trump's recent controversial remarks regarding the continent — including referring to African states as "s***hole countries"and claiming that Nigerians would never want to leave the US and "go back to their huts" — hardly sets the stage for a productive and cordial discussion on bilateral issues of importance.

So why is the meeting even being held at all? The official line from White House spokeswoman, Sarah Sanders, is that "President Trump looks forward to discussing ways to enhance our strategic partnership and advance our shared priorities." But there are a number of possible reasons for the meeting.

In light of Trump's recent unflattering comments concerning Nigeria, it's possible the meeting will be used as a chance to make amends.

"This is an opportunity for the US — especially under Trump — to turn a new page and convince Africa that they don't harbor serious contempt towards us and that a mutual, strong relationship is the key," Tukur Abdulkadir, a senior lecturer in political science at Kaduna State University told DW.

Trump is likely to use the meeting as an attempt to reset the troubled state of US-African diplomacy. Buhari was notably one of the first African leaders Trump personally called following his election. Since then, however, Trump appears to have shown little interest in the continent — largely indicated by his firing of former Secretary of State Rex Tillerson in the middle of an African tour and the fact that he has not yet appointed anyone within the state department to a senior leadership position designed to handle African affairs.

"Generally Nigerians see the US relationship as relatively cordial, but of course it depends on the dynamics of the time," Abdulkadir told DW. 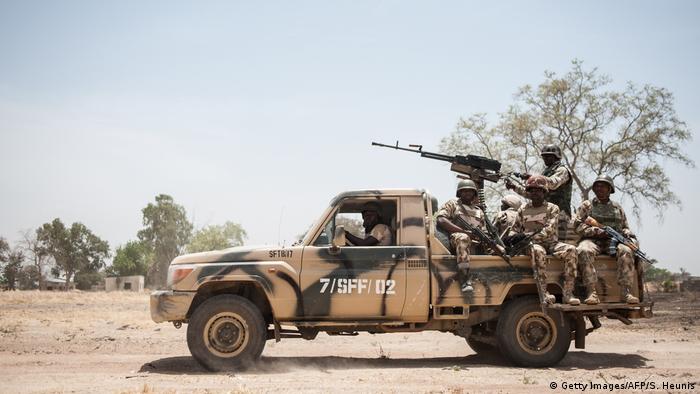 Security is one of the highest issues on the agenda for the meeting — particularly with regards to Boko Haram in Nigeria. The Islamic extremist group began a violent insurgency in the country's northeast nine years ago, with the ultimate aim of consolidating an Islamic state. Tens of thousands of people have since been killed and the group is now active in neighboring Niger, Chad and Cameroon.

Given that Boko Haram has evolved into one of the most serious security threats in West Africa's Sahel region, it is expected that Buhari will seek further US military assistance. The Trump administration has already made a $600 million deal (€496 million) to supply the Nigerian government with military planes and security equipment, although the US is likely to announce the deployment of more military advisers to Nigeria to assist in the fight against Boko Haram.

Economic issues are also high on the agenda. According to Nigerian presidential spokesman, Femi Adesina, Trump and Buhari will "discuss ways to enhance the strategic partnership between the two countries and to advance shared priorities such as promoting economic growth." Although no major trade announcements are expected to come out of the meeting, it's likely the two leaders will discuss ways to further develop their economic cooperation.

Nigeria is an economic powerhouse on the African continent and its leading crude oil exporter. In light of this, the US may be looking to counter the growing economic influence of China.

"If you're looking at what is happening now, China seems to be the most influential country [in Africa] — they have displaced countries like the US, the UK, and France in Sub-Saharan Africa, especially in Nigeria," says Abdullkadir.

"They are involved in multi-billion dollar projects in various sectors of the economy. I think the US really needs to do a lot to convince the people of Nigeria that they really mean well." 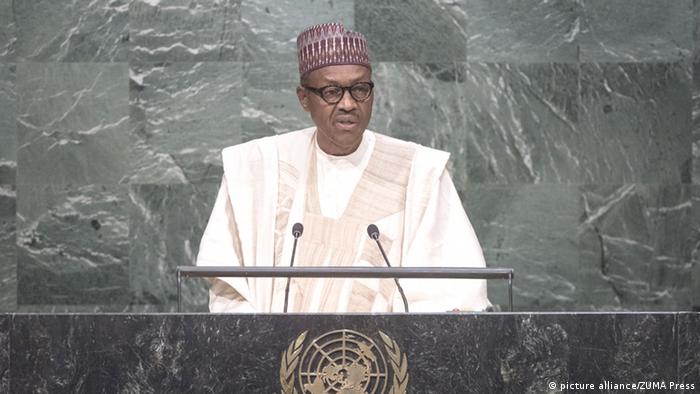 Nigerian President Muhammadu Buhari addresses the UN General Assembly in New York in 2015. With an upcoming election, Buhari is likely to increase his presence on the world stage

Promoting Nigeria on the world stage

Buhari could also use the meeting as a chance to promote his own political goals.

After announcing his intention to seek a second term in office, Buhari now faces elections early next year. He won office in 2015 in a rare democratic transfer of power — largely based on promises to stem the tide of Boko Haram, which have so far failed to materialize. This trip to Washington, then, is a good chance for Buhari to boost his international profile as a world leader and attempt to shake off his unflattering nickname 'Baba Go-Slow' before the campaign season begins.

"The [Nigerian] opposition dismissed [the meeting] as a propaganda stunt by the president," Abdulkadir told DW.

"But it shows clearly that the powerless status that Nigeria had in the past is gradually giving way to a more respectable relationship with the community of nations, and especially the United States."