After a new sexual misconduct allegation was made against the US Supreme Court justice, President Trump took to Twitter in a vehement defense, and Democratic presidential candidates called for an investigation. 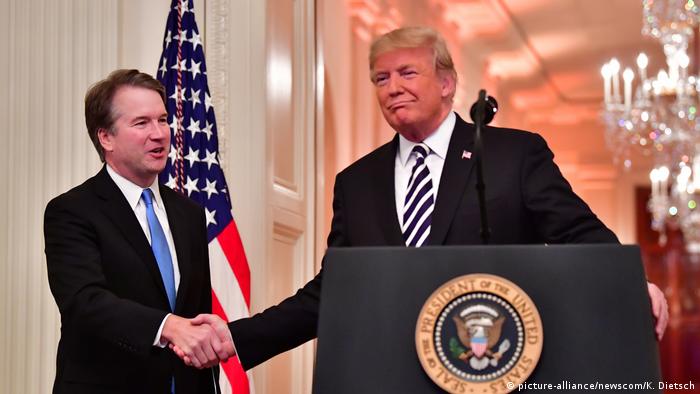 US President Donald Trump on Sunday blasted a new sexual misconduct allegation made against Supreme Court Justice Brett Kavanaugh, accusing the "lamestream" media and "radical left" Democrats of conspiring to impeach the judge.

During Kavanaugh's confirmation process in October 2018, he was accused by two women of sexual misconduct during his time as a student at Yale University in the 1980s. Kavanaugh vehemently denied the allegations, which upended the confirmation proceedings.

The latest misconduct allegation against Kavanaugh surfaced as part of a 10-month investigation by the New York Times into his past behavior.

In an article published in the newspaper on Saturday, a former Yale classmate said he saw Kavanaugh at a "drunken dorm party where friends pushed his penis into the hand of a female student."

The alleged incident had been reported by the classmate, Max Stier, to the FBI during Kavanaugh's 2018 confirmation process but it was not investigated, according to the Times.

The story is similar to misconduct claims made last year by Deborah Ramirez, who accused Kavanaugh of waving his penis in front of her face at a dorm party while he was a student at Yale.

Republicans have called the allegations against Kavanaugh a smear campaign to defame the conservative judge and remove him from the Supreme Court, while Democrats have called for an investigation.

After the new story surfaced, President Trump took to Twitter in response, calling on Kavanaugh to take legal action over the claims.

"Brett Kavanaugh should start suing people for liable, or the Justice Department should come to his rescue," Trump tweeted, misspelling the word "libel" before sending a new tweet with the correct spelling.

Some Democrats seeking to be the party's presidential candidate in the 2020 election called for Judge Kavanaugh to be investigated.

"Brett Kavanaugh's confirmation is a shame to the Supreme Court. This latest allegation of assault must be investigated," former housing secretary and Democratic presidential candidate Julian Castro tweeted.

Trump, who nominated Kavanaugh to the Supreme Court and has continually defended him publicly, claims the pressure put on Kavanaugh by political opponents is part of an underhanded strategy to influence the judge's legal decisions.

Davos: Putin warns of US 'Big Tech' dominance 0m ago

AstraZeneca pulls out of vaccine talks: EU official 1h ago