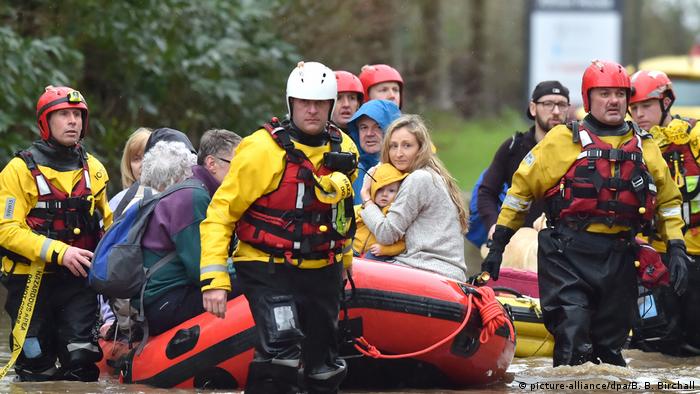 Britain deployed its army to help deal with high winds, heavy flooding and landslides as Storm Dennis raged across England, Scotland and Wales on Sunday.

A record 594 flood warnings and alerts were raised, extending from Scotland's River Tweed to Cornwall in southwest England.

One man died after falling into the River Tawe in south Wales.

"A male has fallen into the river … at approximately 10 a.m. local time (1000 UTC) this morning and has sadly been found deceased further along the river in the Tebanos area," Dyfed Powys Police said in a tweet.

The Ministry of Defense drafted its troops in West Yorkshire, northern England to help deal with the heavy storm.

"Our armed forces are always ready to support local authorities and communities whenever they need it," said Defense Minister Ben Wallace.

Rescuers pulled out two bodies from rough seas off the coast of southern England on Saturday.

The region had only recently begun to recover from flooding caused by last weekend's Storm Ciara.

Winds of over 90 miles (150 kilometers) per hour were recorded in Aberdaron, south Wales.

"Some communities have been cut-off ... but emergency service workers are working tirelessly to put measures in place to ensure the safety of residents," South Wales Police said in a statement.

Gwent Police said residents in the village of Skenfrith in Monmouthshire, south-east Wales, were advised to evacuate due to severe flooding.

The River Taff burst its banks in the town of Pontypool and severe flood warnings have been issued for the River Neath south of the country and the River Teme further north. 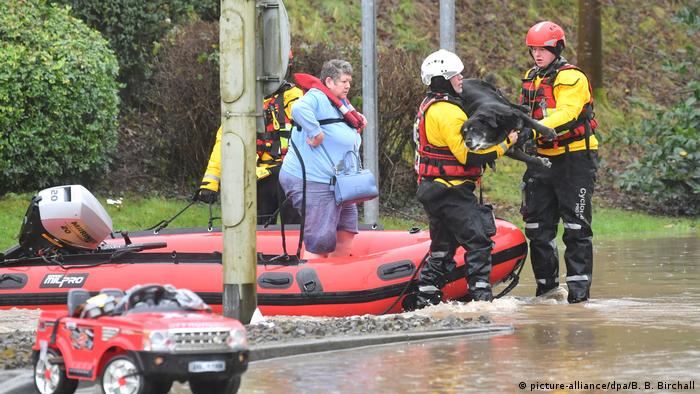 Residents in the village of Skenfrith in south-east Wales, were advised to evacuate due to severe flooding

Britain's meteorological service, The Met Office, only issues the highest red warning when it considers the weather to be so dangerous it poses a "risk to life." Residents are advised to immediately take action to protect themselves.

Sunday marked the first time the service sounded a red warning since December 2015.

Later in the day, the alert was downgraded to "amber," but still indicates the weather can pose a "potential risk to life."

"The forecast is for very significant levels of rain, especially in the eastern valleys of South Wales," said Jeremy Parr, from Natural Resources Wales. "Impacts could be severe overnight, and everyone should take the warnings extremely seriously," he warned. 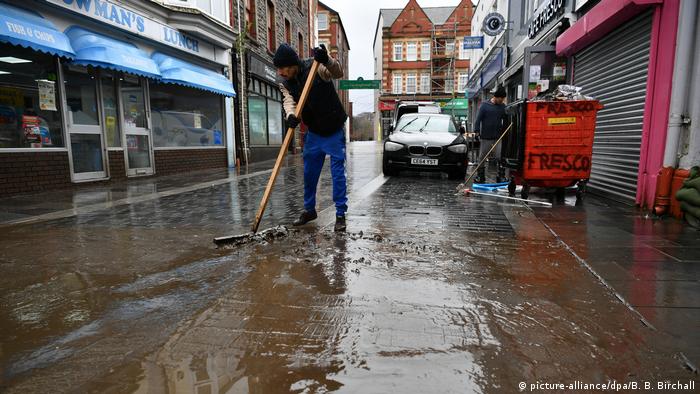 Known as Storm Victoria in Germany, the central European country's rail network was badly affected by the adverse conditions late into Sunday evening.

Deutsche Bahn announced there would be severe delays between Hamburg and Berlin and from Hamburg to Münster. Long-distance trains were also diverted between Dortmund and Cologne.

Debris and fallen trees had prevented trains from using certain tracks in the most populous German state of North Rhine-Westphalia.

The storm also ripped across northwestern France on Sunday. Meteo-France, the country's national weather service, said that the regions of Finistere and Morbihan in Britanny were put on orange alert for heavy rain and flooding. Around 60,000 people suffered power cuts.

A major winter storm — named both Ciara and Sabine — has passed through large swaths of Europe, resulting in a number of deaths across the continent. Weather services say the worst is yet to come for parts of Germany. (10.02.2020)

They all agree, but they won't all agree to participate. The hypocritical deal on climate neutrality by 2050 reached at the EU summit demonstrates how isolated Germany is on this issue, says DW's Christoph Hasselbach. (13.12.2019)