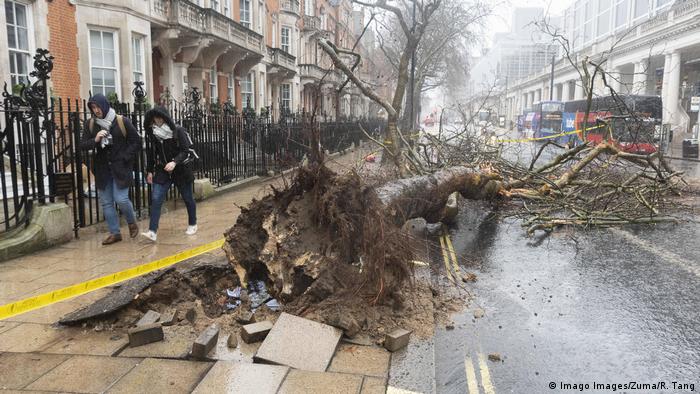 Northern Europe is currently being hit by a major storm, which is moving south. In Germany, where the storm is known as Sabine, travel services and public events have been the weather's first casualties.

Germany issued its second-highest storm warning level for large parts of the country. In parts of the Black Forest, the highest level 4 warning was issued. The weather system was forecast to travel south towards Bavaria throughout the night.

Early on Monday morning, two people were seriously injured by falling trees in the city of Saarbrücken.

Wind speeds of 120 kilometers (75 miles) per hour were expected through the night in Germany, likely to fell trees and impair traffic. By 3 p.m. on Sunday, wind speeds had topped 150 kmh in the Harz Mountains in central Germany. In Kiel, winds were at 120 kmh.

By midday, Düsseldorf airport reported it had canceled or diverted 111 flights, with Cologne-Bonn airport also reporting a number of grounded flights. Both airports advised passengers that stoppages could continue on Monday. Around 180 flight departures and arrivals — about 15% of scheduled flights — were canceled at Frankfurt Airport, a spokeswoman for the airport operator Fraport said, adding that 130 flights scheduled for Monday had already been canceled. Short- and long-haul flights from Munich airport have been grounded until midday Monday, the national carrier, Lufthansa, said.

National rail operator Deutsche Bahn (DB) said it would cancel long-distance trains nationwide as a result of the storm. "Because of the current developments and increasingly powerful winds we have decided to progressively suspend all long-distance traffic across Germany from 1800 [1700 UTC]," DB said. Trains are cancelled until at least 1000 (0900 UTC) on Monday.

A sold-out Bundesliga match between Borussia Mönchengladbach and Cologne was canceled in the western city of Cologne. The Ski Jumping World Cup in Willingen, in the state of Hesse, had already been canceled on Saturday. 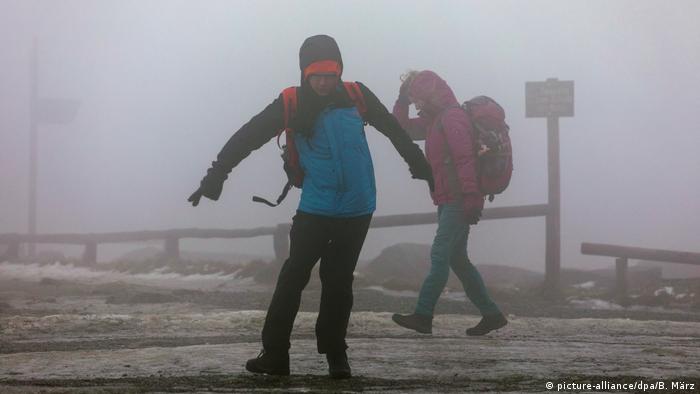 Germany has issued its second highest warning for the storm

The storm is the strongest to hit the country since 2013.

The rough weather also brought down trees and power lines, leaving around 30,000 homes without electricity.

The strongest wind speed recorded was 150 kmh at Aberdaron, in northern Wales, the Met Office said.

Dozens of flights were canceled and rail companies operated reduced timetables. British Airways has offered to rebook affected passengers' flights. The national rail company has advised passengers not to travel by train for the time being.

Huge waves forced the English port of Dover to shut down operations, and ferries across the region were also halted.

Dozens of sports events were called off, including the Premier League fixture between Manchester City and West Ham, the Women's Super League football derbies, and two Super League rugby games.

In Scotland, three people were reportedly injured when a pub roof collapsed. 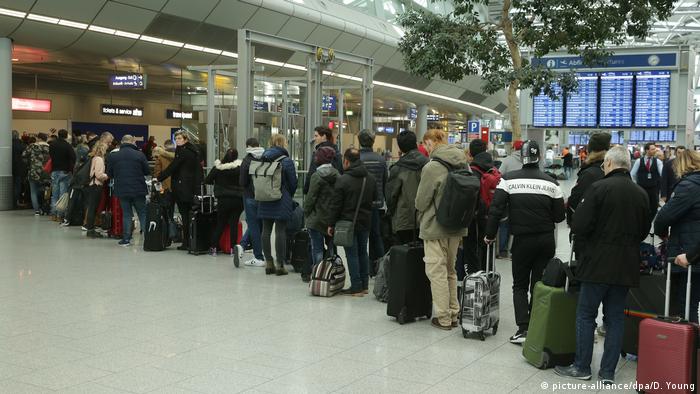 By midday, Dusseldorf airport had cancelled or diverted 111 flights

Belgium was expected to be affected for about 24 hours from 10 a.m. local time (0900 UTC), with wind speeds of about 130 kmh or more. About 60 flights were canceled at Brussels Airport, including flights from Lufthansa and Eurowings.

Authorities warned of flooding and storm damage in northwestern France. In the Vosges mountains, wind speeds of up to 140 kmh were expected. Authorities warned against going into forests and parking cars under trees.

The port of Calais was closed due to dangerous swell.

Winds of 100 kmh were recorded just after midday in the Netherlands, and were expected to pick up to 140 kph later.

Locals have been told to leave their infamous caravans at home, while the national football association canceled all games in its professional leagues on Sunday. KLM grounded dozens of European flights to and from Amsterdam's Schiphol airport.

Ignoring the warnings, a group of extreme cyclists competed in the Dutch Headwind Cycling Championships, riding along an 8.5 kilometer (5.3-mile) course on the coast of Zeeland. The event is billed as a Dutch version of mountain cycling.

The national weather agency warned that coastal regions in the north and northwest may experience flooding as a result of rough seas and high tides. An event in Galway for the European Capital of Culture 2020 was already canceled on Saturday evening.

About 10,000 homes were left without power, according to broadcaster RTE.

Forecasts warned that hurricane-force winds could hit the country late on Sunday.

Danish paper Jyllands Posten reported a woman and a child were washed into the North Sea from a pier in the country's north, but were soon rescued. Several traffic accidents were also reported.

Motorists were urged to avoid using large bridges, such as the Great Belt Bridge connecting the eastern and western parts of Denmark.

Norway's Meteorological Institute issued a yellow warning for the southern and eastern parts of the country until 10 p.m. (2100 UTC). Several ferry services to Sweden and Denmark were reportedly stopped and several roads were closed. Strong winds prevented a Danish passenger boat from docking in Oslo.

Thunderstorms and torrential rain have wreaked havoc in the fire-devastated states of New South Wales, Queensland and Victoria. Despite the wet weather, hundreds of blazes continue to burn and many areas remain dry. (18.01.2020)

Germany: A survival guide for winter

With Christmas celebrations at an end and winter well underway, many people in Germany feel the weather weighing on their spirits. But these tips from residents on how to fight off gloom and spread joy could help. (29.12.2019)