Travel ban: US to again conditionally admit refugees from 11 nations

The US will resume admitting refugees from countries that it said posed increased security risks. Officials will apply extra vetting to people from the mostly Middle Eastern and African nations. 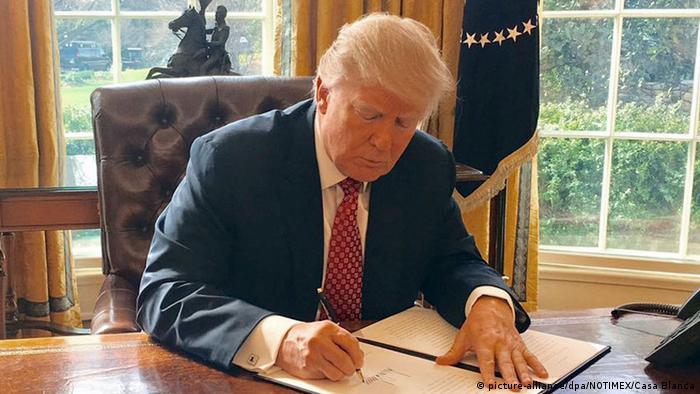 The Department of Homeland Security will resume admitting refugees from 11 countries, US officials told reporters on condition of anonymity Monday, but displaced people will be subjected to additional screening and other new security measures.

Advocates say the changes will still effectively block refugees. "Adding yet more hurdles to an already overly bureaucratic process will burden those seeking safety for themselves and their families," Amnesty International USA said in a statement.

Administration officials offered no details about whom they would subject to the extra screening, citing security concerns. However, officials already demand that all applicants supply more detailed histories and evidence of their past activities, and many have to allow access to personal electronics and social media accounts.

In his first year, Trump capped refugee admissions at 53,000 — less than half the 110,000 Barack Obama had planned to allow for 2017. He also issued an executive order halting the refugee program pending a thorough review, instituted stricter vetting requirements and quit negotiations on a voluntary international pact to facilitate global migration. Trump has capped refugee admissions at just 45,000 for fiscal year 2018, and given the backlog from the lengthy halt and a slowdown in processing because of generally tougher applicant reviews, even fewer displaced people could receive residency in the US this year.

Despite declaring the US "open for business," Trump has been less eager to welcome new residents. He has proposed ending the US's green card lottery, which makes the country more accessible to new residents from the Middle East and Africa — regions that he has made disparaging remarks about.

Trump also wants to place limits on family unification. Until now, people could sponsor their parents, grandparents, siblings and extended families to join them.