Cardinal George Pell, who helped elect popes and ran the Vatican's finances, has been found guilty of sexually assaulting two choirboys in the 1990s, Australian media have reported. Pell has maintained his innocence. 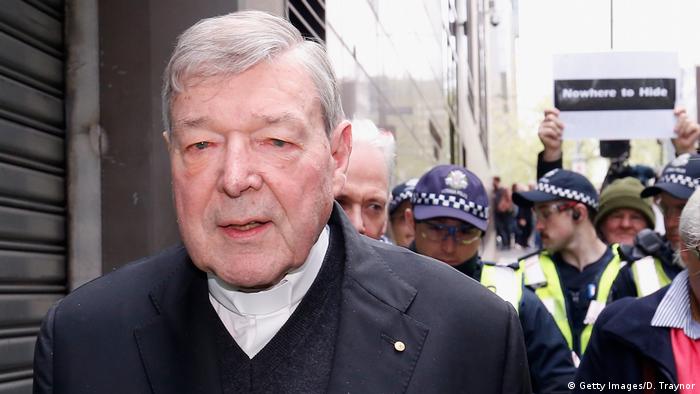 Cardinal George Pell, the Vatican's economy minister and a top adviser to Pope Francis, has been convicted of molesting two choirboys, an Australian court said Tuesday.

An Australian court found Pell guilty on one count of sexual abuse and four counts of indecent assault of two 13-year-old boys at St. Patrick's Cathedral in Melbourne in the 1990s.

The 12-member jury delivered the unanimous verdict on December 11, but the presiding judge had issued a gag order that prevented reporting since the trial began last May. The suppression order was lifted on Tuesday after prosecutors decided not to proceed with a second trial related to separate sex abuse allegations against the cardinal.

Pell, now 77, but 55 at the time of the crime, was convicted of forcing the boys to perform oral sex on him in the priests' sacristy of St. Patrick's Cathedral, where he was archbishop. The other convictions related to improperly touching the boys.

Survivors and onlookers jeered Pell as he walked out of the court where Judge Peter Kidd had lifted the suppression order. The cardinal did not address the crowd, but through his lawyer maintained his innocence and indicated that he would appeal the verdict.

Most senior Catholic official to be convicted

Pell has maintained his innocence throughout the trial, and his lawyers plan to appeal. He did not testify during the trial. Instead, the jury was shown a video recording of Australian police questioning Pell in Rome in 2016, in which the cardinal strongly denied the allegations.

"The allegations involve vile and disgusting conduct contrary to everything I hold dear and contrary to the explicit teachings of the church which I have spent my life representing," Pell told police.

The identity of the victim is known, but he has asked for the media to refrain from questioning him and his family. In a statement following the verdict, he declined to comment on the case but said he had "experienced shame, loneliness, depression and struggle" as a survivor of abuse.

The second victim died of a heroin overdose in 2014 without ever coming forward about the abuse.

Cardinal Oswald Gracias: Those who are guilty are accountable to civil authority

The verdict comes days after Pope Francis convened a conference of Catholic leaders at the Vatican to address multiple sex abuse scandals rocking the Catholic Church in countries like Chile, Germany and the United States.

Pell is the most senior Catholic official to be convicted of sexual abuse. He took leave in 2016 as economy minister for the Vatican to fight the charges. In December, the Vatican announced Pell had been removed as one of the pope's advisers, without commenting on the trial.