Tokyo Olympics: How effective will doping controls be?

Delayed by a year, largely without spectators and Tokyo in a state of coronavirus emergency; this Olympics will be different from those of the past. Has the past year offered athletes greater opportunities to cheat? To say preparations for the upcoming Olympics and Paralympics have not been ideal would be a significant understatement. After the postponement last year came further waves of the coronavirus, with the latest forcing Tokyo to enter a state of emergency earlier this month.

The decision means fans will not be able to attend events in the Japanese capital, though as things stand, venues in the Fukushima, Miyagi and Shizuoka regions will be allowed to host spectators up to 50% of capacity with an absolute ceiling of 10,000 people. Even before this, going ahead with the Olympics was opposed by a majority of the public, according to various media polls.

One of the countless knock-on effects of the pandemic on the Games has been the potential for it to offer opportunities for athletes seeking to illegally gain a competitive advantage through doping.

The World Anti-Doping Agency (WADA) was forced to dramatically reduce out-of-competition testing at the height of the first wave last year. For example, the WADA website reports that only 578 blood/urine samples were taken worldwide in April 2020, compared with 25,219 during the same month in 2019.

"The drop in testing could have allowed some athletes to dope in preparation for the Games but it's more complex than just having a test-free window," Dr. April Henning, an anti-doping expert, author and lecturer at the University of Stirling in Scotland, told DW.

"Many athletes won't dope even if they have the chance to do so undetected. Those athletes who were already going to dope or were doping already may have had an advantage — assuming they would have been tested during that period, which is definitely not a given — by knowing there was little or no chance of being tested. That use could aid performance in Tokyo.

"But doping at the elite level is more likely (though not exclusively, of course) to be planned and timed to ensure benefits can be gained. During the lockdowns, even elites struggled to train effectively and that could have reduced the likely benefit of many doping substances."

WADA also reports that testing levels are now close to being back to normal, despite the spread of the delta variant of COVID-19, with Japan now among the countries concerned about its effects.

"The rise of testing numbers around the world represents a significant effort on the part of Anti-Doping Organizations in light of the ongoing pandemic," read a recent statement from WADA's director general, Olivier Niggli.

But the circumstances surrounding the upcoming Games may give testers an even tougher time than normal. Athletes are often a step ahead of anti-doping authorities, particularly in the lead-up to big events, with most doping penalties handed down years after. For this reason, anti-doping agencies are required to keep their results for 10 years.

During the upcoming Games, the International Olympic Committee (IOC) has handed over control of their anti-doping program to the International Testing Agency (ITA), based in Switzerland, though they insist they "remain responsible" for clamping down on the dopers.

The ITA, which will be overseen by WADA, and work with domestic agencies and the Court of Arbitration for Sport (CAS), describe themselves as an independent non-profit organization, and say they will be "leading the most extensive anti-doping program for Tokyo 2020 that has ever been implemented for an edition of the Olympic Games."

In Tokyo, an ITA team of 24 managers will be supervising 250 doping control officers (DCOs) and roughly 700 chaperones (who notify athletes and accompany them to the doping control stations). About half of these will be drawn from the Japanese Anti-Doping Agency (JADA), and the other half from elsewhere.

They are expected to collect around 5,000 urine and blood samples from a pool of over 11,000 Olympians and more than 4,000 Paralympians over the course of the Games. The ITA describes these as being "targeted and unannounced."

"Adapting our activities to the changing framework due to Covid-19 is indeed challenging, but with the postponement of the Games we were able to gain important experience on how to deal with these circumstances," the ITA said in a written statement to DW.

"The doping controls will be conducted in full respect of the appropriate safety and hygiene measures as described in the relevant IOC playbook and in strict compliance with all regulations enacted by the Japanese health authorities to protect both athletes and the anti-doping workforce." 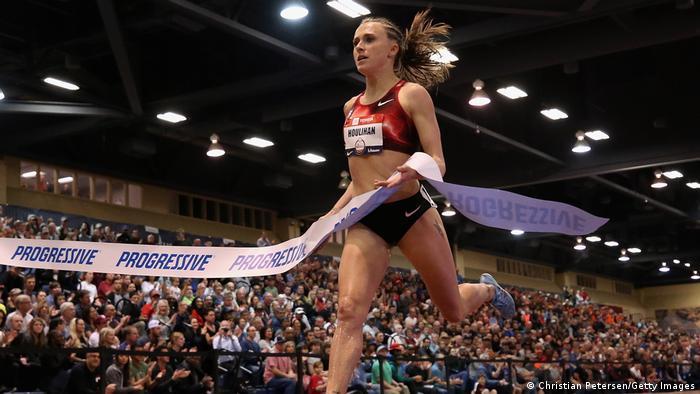 US athlete Shelby Houlihan was handed a four-year doping ban last month. She claims meat from a burrito was the cause

The organization added that the health and safety requirements of the pandemic offer "no reasons for athletes or federations not to follow through with doping controls and any non-compliance with the doping control process might potentially result in an anti-doping rule violation."

Nevertheless, there may be plenty who will try to slip through the net.

"Generally, anti-doping is well-planned at events like this and there has been a huge outlay of resource for Tokyo," said Dr. Henning. "But as we've learned from Sochi and the Russian doping system, very little is foolproof if you have a determined and coordinated effort."

As always, the ability and desire to catch dopers varies enormously according to how well developed and funded national anti-doping programs are.

"There's also a question of scale," added Dr. Henning. "So, the US has an established system in place but the sheer size of its population and the number of athletes that could potentially make a national or Olympic team is huge, meaning the testing needs to be both deep and wide to be effective.

"Given how some sports select athletes (for example, athletics and swimming have trials where some unexpected athletes can qualify), it's possible that those who make it to the Games haven't been regularly (or ever) tested out of competition. There is also a strategic approach in many places, where athletes in some sports are tested more heavily than others. The variance is great and research shows that athletes are aware of the differences and implications of those to some extent."

In short, the anti-doping systems are always struggling to evolve to keep up with the dopers. While the COVID-19 pandemic has altered the picture slightly, the major challenges remain the same.

Head coach Stefan Kuntz has announced his 19-man squad for the Tokyo Olympics. The squad includes seven players who surprisingly won the U21 European Championships in June, but Kuntz has criticized some Bundesliga clubs.