Elisabeth Seitz is one of three German gymnasts who have made a stand by competing in full-body leotards to protest against the sexualization of sport. She says each athlete must be allowed to decide what they wear. 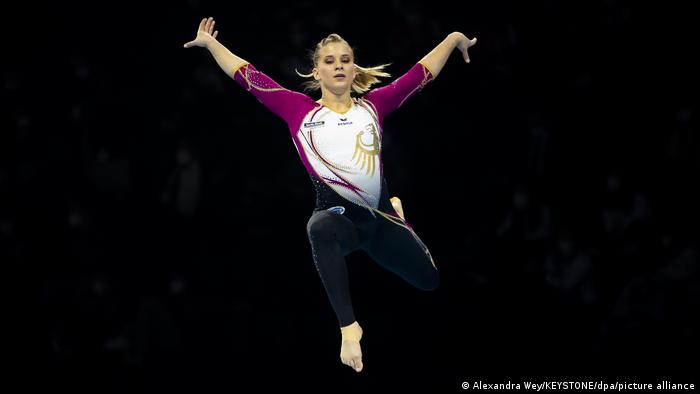 Female artistic gymnasts have been putting up with leotards for years. The standard for athletes taking part in international competition who did not have a religious reason for covering their whole body was outfits which showed their legs and were tight-fitting in other areas.

But then three Germans at last week's European Championships decided to don full-body clothing, or a "unitard," in what their national federation said was a stand against "sexualization in gymnastics".

Now one of the trio, Elisabeth Seitz, has told DW in an interview that she hopes more athletes across sports will take their lead and cover up at the Tokyo Olympics in July and August. 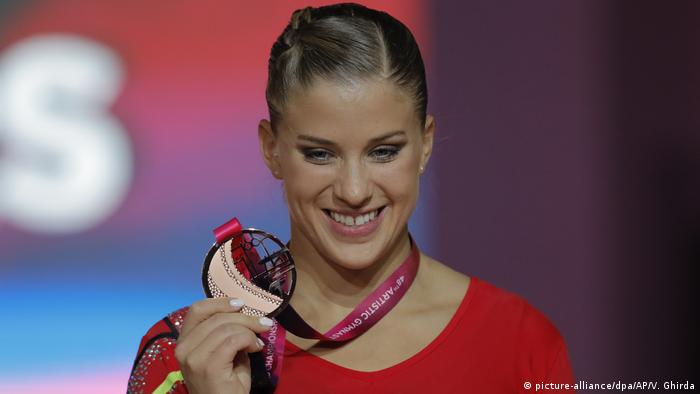 "I would love to see more gymnasts wearing the so-called unitard but not just in gymnastics, I want every woman in every sport to have the opportunity to decide by herself what she wants to wear," said Seitz, who competed at the 2012 and 2016 Olympics and won bronze at the 2018 World Championships on the uneven bars.

"[The governing bodies] should tell all the athletes that they can decide by themselves what they want to wear as long as it is possible in their sports to wear this."

The Tokyo Olympics, delayed for a year by the coronavirus, needs some good publicity when it comes to female rights. One of two sexism rows led to the Games chief resigning and being replaced with a woman.

The sport of gymnastics has also been rocked by a series of scandals in recent years. In the US, Larry Nassar, a doctor at USA Gymnastics, was convicted of the sexual abuse of hundreds of young gymnasts. Olympic champion Simone Biles said she was one of his victims.

There is nothing in the rules of gymnastics that stops women from wearing full-body outfits, but the leotard with bare legs has prevailed in the artistic version for decades.

World governing body FIG told DW: "The possibility to wear unitards in competitions has been stated in the FIG rules for several years. In rhythmic gymnastics, for example, many gymnasts are used to wearing full-legged leotards. FIG is pleased to see that athletes know that they can choose attire they feel the most comfortable with to compete."

Unitards are, therefore, perfectly legal in Tokyo as well.

"The International Federations are responsible for establishing and enforcing the rules concerning the practice of their respective sports (Iincluding clothing)," the International Olympic Committee told DW.

Gymnasts have long been nervous that their outfit might slip when doing the splits or jumps in certain events, revealing more than they would like. It's all a question of feeling comfortable, a major reason why Seitz, Sarah Voss and Kim Bui decided to wear the new outfit at the European Championships in the Swiss city of Basel.

Voss made the move first and then the other two followed in the all-around final. Seitz then switched back to a shorter leotard.

"It is not that we want to show everybody that you now have to wear this new suit," said Seitz, who looks well set to compete in Tokyo.

"It is more about wearing what you want and whenever you want to wear it. I decided by myself what I wanted to wear and that is what everybody should do.

"Nobody tried before to change things. We knew that when we wore this new leotard, everyone will look at us. It is good that everybody is now discussing it," she said.

Their crusade might already be catching on. British-Jamaican gymnast Danusia Francis told the BBC that the suit "gives the power of choice back" to female gymnasts.

The first test was the European Trampolining Championships in Sochi, which also comes under the auspices of gymnastics and started this week.

One Olympic sport where full body outfits become complicated is swimming. At the 2009 World Championships in Rome, suddenly all the competitors — both male and female — were wearing full-body suits.

Esports and sexism: Enough is enough

But this was nothing to do with covering up and instead to do with speed: The full-body suits allowed swimmers to power quicker through the water. The governing body promptly banned them as world records were falling every other race.

Now female swimmers must wear suits that do not go past the shoulders or knees.

But what about performance in gymnastics? Do longer suits help or hinder?

"For me it was easy to change the leotard because in training we often wear tights over our normal, traditional leotards so it wasn't that special for me," said Seitz.

"I think you just have to train a little bit with the new suit and then it is totally fine."

They may not have won a medal, but in setting an example for the future Germany’s female gymnasts are at the top of their game. Athletes should enjoy the freedom to wear what they want, writes DW's Dagmar Engel.

Germany's gymnastics team wore full-body suits during qualifications at the Tokyo Olympics on Sunday in a protest against the sexualization of women in the sport.