Germany's Thomas Bach has won his second and final term at the head of the International Olympic Committee. He said there was "no reason to doubt" that the delayed Olympic Games would be held in Tokyo this year. 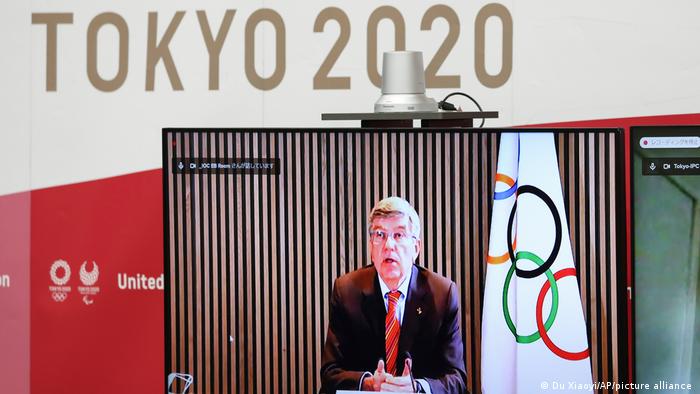 Members of the International Olympic Committee overwhelmingly backed Thomas Bach on Wednesday, handing him another term as the president of the global sports body. The 67-year-old Bach, once a fencing gold medalist for Germany, was reelected to lead the IOC with 93 members voting in favor, one against and four abstaining.

Bach pledged deliver a safe Tokyo Olympics this year despite the coronavirus pandemic.

"Tokyo remains the best prepared Olympic city ever, and at this moment we have no reason to doubt that the Opening Ceremony will take place on July 23," Bach said ahead of Wednesday's vote.

The Olympics and Paralympics were scheduled to be held in the summer of 2020, but were postponed by a year because of the pandemic. In January, the likelihood of the events going ahead at all was cast into doubt.

On Wednesday, Bach sought to dispel such fears. He said his aim was to create "a safe, secure and fair environment for all the athletes."

The rocky road to the Olympics

"The IOC is working at full speed together with our Japanese partners and friends to make the postponed Olympic Games a safe manifestation of peace, solidarity and resilience of humankind in overcoming the pandemic," Bach said.

Tokyo 2020 organizers are set to announce by the end of March whether overseas spectators will be allowed to attend, although it is widely reported that they will be barred to minimize infection risks.

Bach was elected as the head of the IOC in 2013 for an eight-year term. The IOC presidential term has since been halved from eight years to four. Bach has already had to deal with the problem-laden 2014 Sochi Winter Olympics, the 2016 Rio Games, state-sponsored Russian doping and the deadly wave of coronavirus.

After securing his second and final term on Wednesday, Bach described his first mandate as "not so easy."

"Hopefully we'll have us facing one less problem than we've had in the last eight. Who knows?!" he said.

"I would like to look forward and continue to achieve ambitious goals also in the post-corona world," Bach added.

Coronavirus: Japan confident it can overcome hurdles to host Olympics

As Japan's vaccination program gets underway and infection numbers sink, health authorities are increasingly optimistic that the postponed Tokyo Summer Olympics can be salvaged.

Though COVID-19 and public outrage loomed large, Tokyo 2020 still possessed the Olympic magic we all know and love. But the IOC won't always be able to hide behind the athletes' brilliance, writes DW's Oliver Moody.

The IOC president has put forward a hopeful message with a revised Olympic motto that includes the word "together." Before the session began, officials held a minute of silence for victims of COVID-19.