Timing is everything as Iran launches its most advanced missile | News and current affairs from Germany and around the world | DW | 21.05.2009

Iran has test-fired a missile with a range of up to 2,500km, putting Eastern Europe, Israel, and US bases in the Middle East within striking distance. The timing suggests the launch was made with a wider impact in mind. 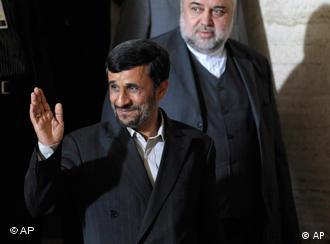 US Defense Secretary Robert Gates provided the first official US confirmation that Iran had test-fired a missile on Wednesday. Gates said the missile had a range of 2,000 to 2,500 kilometers and would therefore be able to hit targets in Israel, US bases in the Middle East, and parts of Central and Eastern Europe.

The US confirmation came after Iranian President Mahmoud Ahmadinejad announced that a Sejil-2 missile had reached its intended target, without specifying the range of the missile. He said in a speech in Semnan, which lies in north- eastern Iran and where he said the missile was launched, that the Sejil-2 was more advanced than previous missiles.

While further details are sketchy, this is said to be the longest-range missile Iran has ever launched, raising concerns about the sophistication of Tehran's missile program – and its timing. US-Russian scientists this week said in a report that they believe that Iran is at least five years away from being able to fire a ballistic missile equipped with a nuclear warhead that can cover long distances

Every time Iran launches a missile, "it is in response to a particular event," Andrew Brookes, of the International Institute of Strategic Studies think-tank in London told Reuters. This test coincides with three major events.

It comes after the first positive meeting between US President Barack Obama and Prime Minister Benjamin Netanyahu. Netanyahu has said that Iran is the "gravest" threat in the Middle East. The US accuses Iran of harboring nuclear ambitions and is preparing to make nuclear weapons.

Obama has offered direct diplomacy with Iran and said he expects a positive response by the end of this year. Israel's deputy foreign minister, Danny Ayalon, said on Israeli military radio that the latest missile tests has not changed the threat-level for Israel, but that "Europeans should be concerned" and warned that Iran was trying to develop missiles that could eventually reach the US east coast.

The missile test was also conducted on the same day that the United States and Russia wrapped up the first round of talks to discuss a successor to the 1991 Strategic Arms Reduction Treaty, or START.

The landmark Cold War-era nuclear disarmament treaty expires in December and any new deal will have far-reaching implications for global security.

Moscow insists any new treaty must take missile defense into account. The US has plans to install parts of a global missile shield in Eastern Europe to fend off any attacks from Iran. Moscow however is not convinced by this explanation. US President Obama will meet with his Russian counterpart Dmitry Medvedev in Moscow to discuss this and other key issues at the next round of START talks in July.

Last but not least, the missile test comes just weeks ahead of the June 12 presidential elections in Iran. Analysts told AP that the launch was likely "intended for domestic consumption ahead of those elections, rather than a message to the US."

Of the three main rivals, Iran's former prime minister, Mir-Hossein Moussavi, is widely considered to be Ahmadinejad's main challenger. President Obama hopes to begin negotiations with Tehran after the elections.

EU Agrees to Turns Up Heat on Tehran

EU nations will implement UN-agreed sanctions against Iran over its nuclear program, including restrictions on public loans and tougher cargo inspections, the European presidency said. (08.08.2008)

Iran ready for talks with West