Tibetan unrest follows a string of self-immolations | Asia | An in-depth look at news from across the continent | DW | 15.08.2012

Hundreds of ethnic Tibetans have taken to the streets in China to protest police brutality. The demonstrations follow a string of self-immolations among members of the Tibetan community. 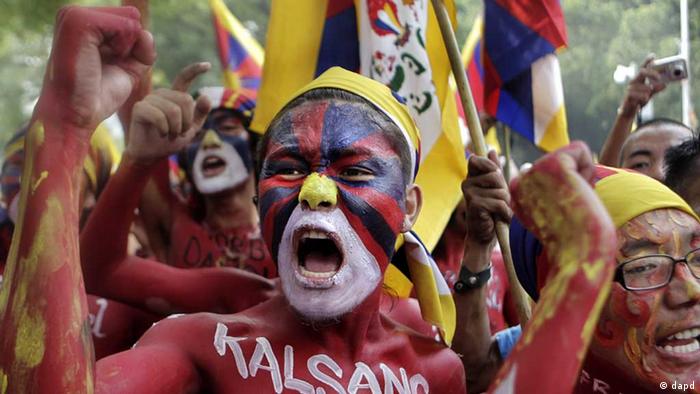 Hundreds of Tibetans protested outside the police headquarters in the Tongren county of China's northwest Qinghai province. The Free Tibet group, which is based in the UK, told the media that the protests began after police “dragged four ethnic Tibetans from a car, severely beat them and threatened them with guns.“

On Monday, the Tibetan rights groups claimed that a 20-year-old monk Lungtok, and a 21-year-old former monk Tashi set themselves on fire in Aba prefecture of Sichuan. Lungtok died whereas Tashi was hospitalized with severe injuries.

After the self-immolations, which took place around 6pm local time, a clash broke out between ethnic Tibetan protesters and the police. The rights groups said the police tried to block the area and took away two Tibetans. According to the independent media reports, the clash left one protester dead.

Use of force by the Chinese

The Free Tibet and the India-based Tibetan Center for Human Rights and Democracy alleged that the policed used "disproportionate force" against the protesters.

"It is shocking that the police use metal batons spiked with nails to beat Tibetans," said Free Tibet director Stephanie Brigden. Such a response can only make the grievances of the Tibetans deepened," he said, adding that the Tibetans are united against the Chinese rule.

The Chinese authorities are silent about the recent clashes.

Tibetan groups say that Tibetans carry out self-immolations to highlight their frustrations with the Chinese rule in the region. According to Tibetan groups, around 50 Tibetans have self-immolated since March 2011 to protest against the restrictions on their religious freedom.

However, Beijing claims that the Tibetans are free to religious practise their religion. The communist government also says that that the living standard of the Tibetans has improved under the Chinese rule. It calls self-immolators "terrorists and criminals" and blames the self-exiled Tibetan spiritual leader the Dalai Lama for instigating violence in Tibet.

More Tibetan protesters have set themselves on fire this year than ever before, in one of the biggest waves of political self-immolations in recent history. A Tibetan monk in exile talks about the issue. (28.06.2012)

Two Tibetans set themselves on fire in anti-China protest

Two Tibetan monks have set themselves alight in Lhasa in protest at Chinese rule. The incident is the latest in a series of self-immolations by Tibetans angry at what they see as cultural and religious repression. (28.05.2012)

Bloggers from around the world voice their opinions about the increasing number of self-immolation cases of Tibetans who demand an end to what they consider Chinese domination and aggression. (28.03.2012)