A US advocacy group has moved its "Doomsday Clock" two minutes ahead, hinting the world is closer to a man-made apocalypse - due to global warming and nuclear threats. Some say it paints a pessimistic picture. 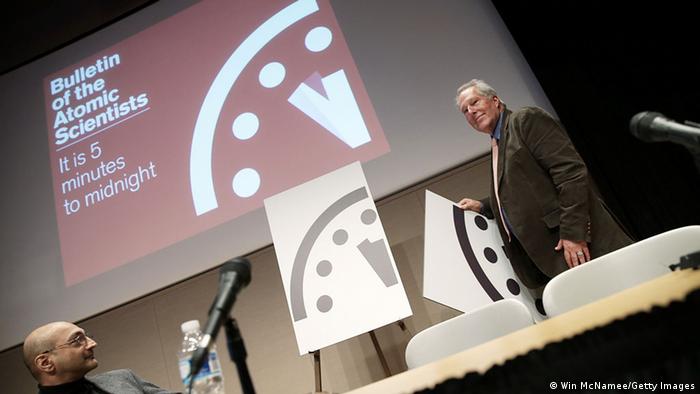 The Bulletin of the Atomic Scientists, a US-based advocacy group founded by the creators of the atomic bomb, said Thursday the Earth was now three minutes from a catastrophic midnight instead of five minutes.

For decades, the prestigious journal has presented a "Doomsday Clock" as a metaphor to explain how close their experts think the world has moved to a nuclear holocaust. For instance, the clock was moved closer or further to midnight during the Cold War era depending on the political situation at that time.

The bulletin included the climate change factor to its analysis of doomsday in 2007.

"This is about doomsday; this is about the end of civilization as we know it," Kennette Benedict, the bulletin's executive director, said at a press conference in Washington on Thursday. She said the climate change and the modernization of nuclear arsenal were undeniable threats to the existence of humans and triggered the journal's 20 scientists to move the clock closer to Armageddon.

"The probability of global catastrophe is very high, and the actions needed to reduce the risks of disaster must be taken very soon," Benedict added.

Sharon Squassoni, a board member of the Bulletin of the Atomic Scientists, believes that not only the threats posed by climate change have drastically increased, the progress on nuclear disarmament has been stalled.

"There is no movement toward follow-on agreements to disarmament treaties that came after the end of the Cold War," said Squassoni. The expert underlines that the US and Russia, which possess 90 percent of the world's nuclear weapons, find it increasingly difficult to talk to each other due to multiple conflicts.

But not all scientists agree with this picture of doom.

"I suspect that humans will 'muddle through' the climate situation much as we have muddled through the nuclear weapons situation - limiting the risk with cooperative international action and parallel domestic policies," Michael Oppenheimer, a professor of geosciences and international affairs at Princeton University, said in an email.