Threatened Bangladeshi blogger: ′The police won′t do anything′ | Asia | An in-depth look at news from across the continent | DW | 25.04.2016

A day after the killing of a university professor, renowned Bangladeshi blogger Imran Sarker was also threatened with murder. He talks to DW about the death threats he has faced and the current situation in the country. 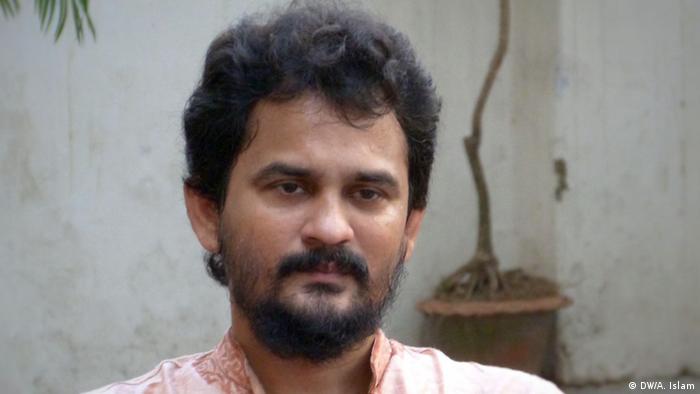 DW: What can you tell us about the death threat you received?

Imran Sarker: I got a threatening phone call from the UK on Sunday afternoon, with a male voice warning me that I would be killed. He said: "You will be killed." I asked him why he wanted to kill me, and then the person disconnected the phone.

Was this the first time you received such a death threat?

This is actually very unfortunate and unacceptable. After I opposed the arrest of an editor, the ruling party publicly criticized me and they issued death threats on social media sites.

And yesterday, I got this phone call threatening to kill me. This is not the first time I have been threatened and I receive such threats almost on a daily basis. But this time it's for criticizing government policies, particularly over the issue of freedom of speech and expression.

Previously, I was also protesting loudly against other problems related to social justice. And I also received death threats for my engagement on that front.

How have these threats changed your life?

It is actually very difficult for me to change my daily life. I usually participate in a number of protests every day. But this time round, when I get threatened so publicly and I see the ruling party issuing the threats, I am really scared and unable to lead a normal life anymore.

I am living a little bit in hiding. I believe the law enforcement agencies in Bangladesh are not acting properly. Although I have been threatened publicly, the authorities haven't so far arrested anyone.

The next time I receive such threats, I won't inform them as I know they won't do anything.

Have you been thinking of stopping your activism?

They had previously called me several times and asked me to stop my blogging, writing, protests and criticism of the government. They directly said on social media: "If you don't stop, we will kill you," and sent letters to my house threatening me. However, this was the first time I was threatened by someone calling me on my mobile phone.

Despite the threats, I have never thought of stopping my work. I know that we have to protect our country from a syndicate of militant groups and politicians who are trying to change the character of our nation.

Bangladesh was liberated in 1971 to become a secular and liberal democratic country. And they are trying to change that and convert it into an extremist, militant country. I, therefore, believe we have to fight against these attempts.

We have very strong memories of our parents and grandparents fighting for our country. So I don't think about stopping my protests, and my efforts to make this country belong to all 160 million of its citizens and not only to a few privileged groups.

How far is the current government responsible for the prevailing situation in the country?

The ruling party is totally responsible for the current situation. They are not doing enough to protect this country. And I believe government inaction and, somehow, attempts to justify the killings have led to the attackers growing increasingly fearless. The government has also failed to take responsibility, and the recent statements of our prime minister regarding the killings have only encouraged a culture of impunity.

Imran Sarker is a renowned Bangladeshi blogger who also writes for DW-Alaap.