Things to know about deportations in Germany | News and current affairs from Germany and around the world | DW | 05.06.2017

Things to know about deportations in Germany

Who orders and who carries out deportations? And why do some people who get told to leave get to stay anyway? DW untangles Germany's complex and multilayered rules about who can be deported under what circumstances. 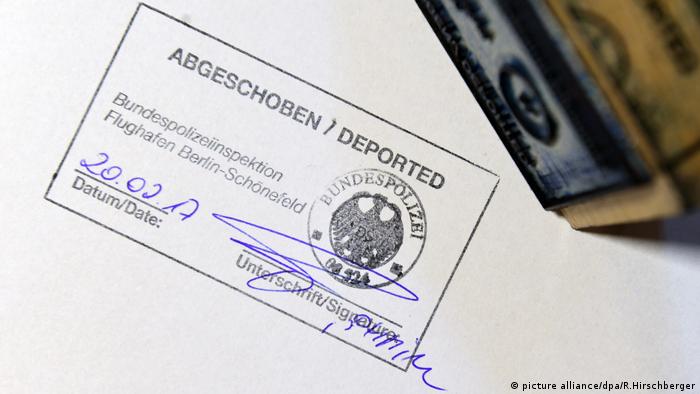 Who decides whether someone should be deported?

You might think that would be the task of the Federal Ministry of Migration and Refugees (BAMF) since it decides on granting asylum requests. But the ministry only determines whether people have a political right to stay in Germany. It can issue what is called a "threat of deportation," or Abschiebeandrohung, but it doesn't ultimately rule on whether they should be forced to leave. That's the job of the local authorities in Germany's 16 federal states.

A rejected asylum application is one common reason for a local foreigner registration authority, or Ausländeramt, to tell someone to leave Germany, but it's not the only one. Foreigners with valid resident permits, including people who have been granted asylum, can also be deported if they commit serious crimes. In such cases, local authorities may consult the BAMF to determine whether it is in the overwhelming public interest that the people in question be deported. But the 16 states can also refuse to carry out deportations ordered by the BAMF if, for instance, they think a country of origin is not safe enough to return people to.

Are all deportations the same?

There are many different ways of deporting people

No. There are two separate legal categories: Ausweisung (expulsion) and Abschiebung (deportation). People who receive notice of expulsion are required to leave Germany because they don't possess a valid resident permit. How they leave the country is up to them. People are deported when it is assumed that they won't leave the country when told to do so. Thus, a person can be forcibly deported but not forcibly expulsed.

Do deportees have a right to appeal government decisions?

Yes. For instance, people whose asylum applications are rejected are entitled to file appeals with what's known as an administrative court or Verwaltungsgericht, which then decides whether the BAMF made the correct decision. But they need to do so quickly. Those whose applications are rejected as "obviously unfounded" have only one week to file an appeal, while others get two weeks. People can also appeal against the decisions made by the foreigner registration authorities.

Among those who are legally required to leave Germany, many escape deportation because they are too mentally or physically ill to travel, their home countries are deemed generally unsafe or they lack identity documents such as passports needed for repatriation. They are then "tolerated" in Germany until the conditions precluding deportation change.

Only slightly more than a quarter of people with no right to remain in Germany can actually be considered for deportation, although people initially allowed to stay may be told to leave later. That happened, for example, with some of the refugees Germany took in during the Balkan Wars of the 1990s who were subsequently required to go back home when the situation stabilized.

What happens first when authorities decide someone has to go? Voluntary returns are easier and cheaper than deportations

The authorities initially hope that those with no right to remain will fulfill what called their "duty to exit," or Ausreisepflicht, and leave of their own accord. That's not as pie-in-the-sky as it may seem. The German government reports that in 2016 more than 50,000 people "voluntarily" returned to their countries of origin. That's far more than the number of people deported in 2016.

That's one reason why German authorities often offer small sums of money (up to 750 euros, or $845) for people who return to their home countries. According to the McKinsey consulting firm, even with those payments a voluntary return costs German taxpayers less than half of what a deportation does.

How does Germany deal with people it forcibly deports? 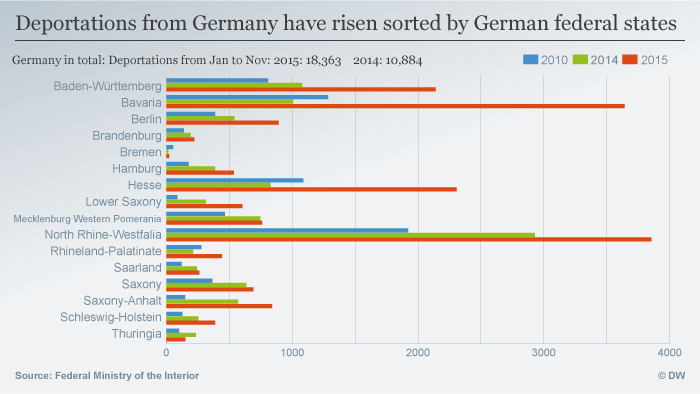 Even if a deportation has been ordered by the BAMF, it's the local foreigner registration office and, if necessary, local police who carry it out. The person in question is informed that he or she will be picked up at a certain time. People who have skipped out on such appointments or tried to go underground in the past may be taken into custody so that they can be found when they are supposed to be picked up. But they are not allowed to be put in prison.

Local police take deportees to airports, where responsibility is handed over to the federal police, who put the deportees aboard flights. Sometimes these are specially chartered planes, but normally scheduled flights are also used. If necessary, German federal police officers accompany deportees on the planes to ensure they get back to their countries of origin.

That has to do with Germany's past. After World War II, the architects of the Federal Republic wanted to prevent the coercive power of the police from being too centralized. That's why responsibility and authority was also given to local institutions. One consequence of this development is that German deportation policy and practice can be mind-bogglingly complex.