German police head calls for deportations without papers | News and current affairs from Germany and around the world | DW | 23.01.2017

The head of Germany's federal police says the country should issue temporary ID documents to speed deportations of potentially dangerous foreigners. Would that be legal and, if so, would it work? 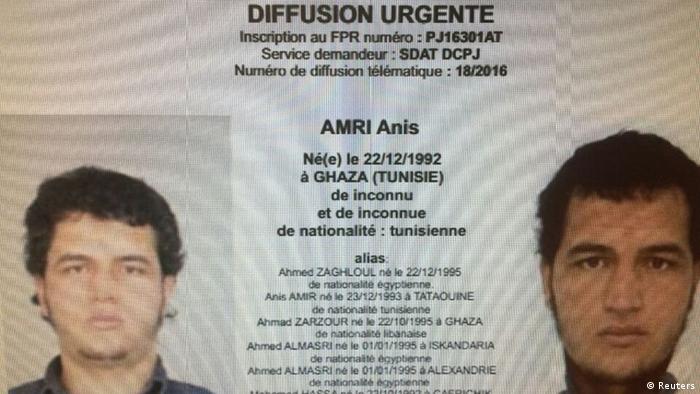 The President of Germany's Federal Police, Dieter Romann, says that if a missing passport hinders the deportation of an illegal alien believed to pose a terrorist threat, as was the case with Berlin terror suspect Anis Amri, then Germany should issue temporary ID papers itself. So-called laissez-passer are accepted within the EU and have a tradition within Europe.

"It used to be enough to issue a national and European EU laissez-passer," Dieter Romann said in an interview with the Deutschlandfunk radio station on Sunday. "Germany could do that by itself."

The situation is not quite that simple. To be of any use, laissez-passer documents would have to be accepted by the countries to which Germany would like to deport failed asylum seekers and other unwanted foreigners. The interior ministry says its working to bring that about.

"This is not primarily a legal question - it's a question for us to discuss with the relevant countries of origin," interior ministry spokesman Tobias Platte said in Berlin on Monday.  "It's a question of their national laws. The interior minister and the foreign minister have taken the initiative in convincing a number of countries to accept laissez-passer papers issued by the EU or EU states like Germany.  This initiative has already had success with countries in the western Balkans, but with others it hasn't. But the sort of conversations the federal police president suggested are already underway."

In Amri's case, a laissez-passer would only have helped if Tunisia had such an agreement with Germany. And there are also human rights issues. The opposition Left Party is very skeptical about Romann's suggestions.

"Deportations against the will of the relevant home country are extremely questionable," Left Party spokeswoman for migrant issues Ulla Jelpke told DW. "And to do without valid identity papers, as Romann is calling for, would be just purely irresponsible. Deportees would inevitably end up in the wrong countries."

A centralized power to deport? 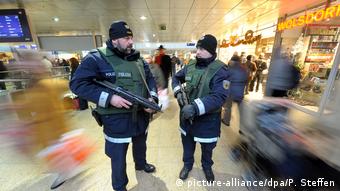 In his interview, Romann echoed calls by Germany's interior minister earlier this month to give federal authorities the power to carry out the deportations of foreigners considered to pose a threat. At present, the federal Ministry of Migration and Refugees decides over asylum requests, but those whose applications are rejected are turned over to regional authorities.

Romann specifically cited the case of Amri, the Tunisian man blamed for the Christmas market truck attack on December 19 in Berlin, as an example of why the system should be changed. In 2016, Amri's application for asylum in the state of North Rhine-Westphalia was rejected, but he couldn't be deported because he didn't have a passport.

That July, he was taken into custody by federal authorities further south in Germany, where he was determined to have committed a number of crimes, including being in Germany illegally. He was turned over to local authorities in Baden-Württemberg but again wasn't deported because he lacked identity papers. He later went underground before carrying out the attack that left 12 people dead.

"I can imagine that if the federal police had kept him, it might have led to his being deported," Romann said. "The federal state has far better possibilities than the approximately 600 regional and local offices for foreigners." 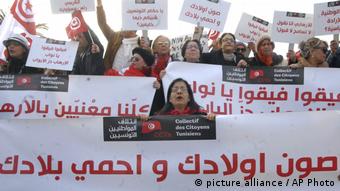 In December Tunisians, protested against the return of jihadists

Germany's 16 federal states differ dramatically in how effective they are in deporting people who reside in the country illegally. According to the news magazine "Focus," in the first half of last year, Baden-Württemberg only succeeded in expelling illegal aliens or getting them to leave voluntarily in less than 10 percent of cases. The figure was 15 percent in North Rhine-Westphalia, while Bavaria leads the way among German states with just under 40 percent.

But for the Left Party such variations aren't an argument for a greater role for federal police.

"These fantasies of a centralized state police force to fight against refugees need to be decisively rejected," Jelpke said. "These statements of mistrust toward regional authorities have to stop. There is no reason to think that federal security authorities would make fewer mistakes than regional ones. There are good reasons for the federalist structure of the German republic, and they shouldn't be brushed aside in the interest of combating terrorism."

Romann's suggestions came ahead of reports that Germany was prepared to deport an unspecified number of aliens back to Afghanistan - which drew immediate condemnation from German refugee advocacy groups like Pro-Asyl. 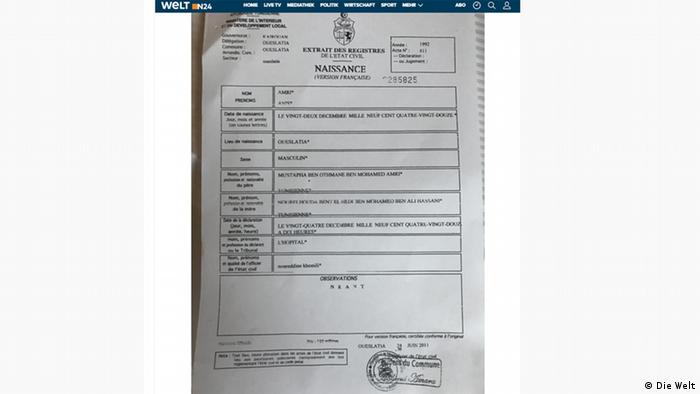 On Monday, the newspaper "Die Welt" published photos of a document it said it had authenticated as Amri's birth certificate. The paper claims that Italian authorities were in possession of the certificate as far back as 2011 when he was detained for illegally entering that country.

That contention is significant for the following reason: Amri was incarcerated for four years in Italy for assault and arson. When he was discharged from prison, he was sent to a deportation center. Tunisia refused to accept him back, claiming there was no evidence he was Tunisian, and Amri was freed after 30 days.

Italy has previously claimed that it had no way of proving Amri's identity and forcing through his expulsion. After being released from custody, Amri went first to Switzerland, then in July 2015 to Germany, where he remained until the December 19 attack.

Die Welt's report suggests that the attack in Berlin might have been prevented had Italian officials used the birth certificate to force through his deportation.

A new threat assessment system is intended to track potential terrorists and increase cooperation between authorities. Security has come into focus since the Berlin Christmas market attack. (23.01.2017)

Germany to deport asylum-seekers back to Greece

Germany is set to reverse a six-year-old block on the deportation of asylum-seekers back to Greece, despite a humanitarian crisis in the refugee camps there. Refugee organizations are horrified. (13.01.2017)