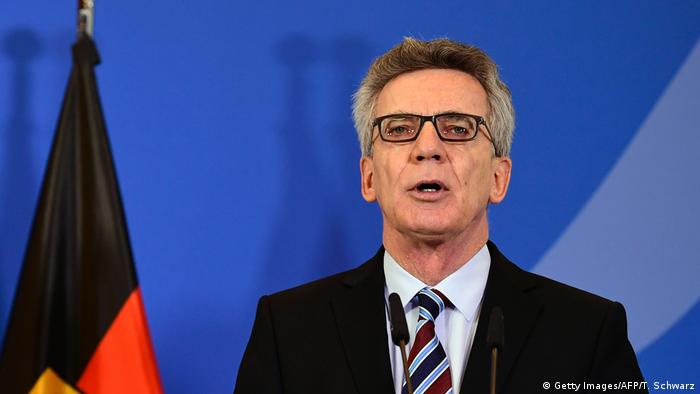 Two weeks on from the truck attack on a Berlin Christmas market, German Interior Minister Thomas de Maiziere on Monday began laying out plans to overhaul the country's asylum policy and security apparatus.

In an op-ed published in Tuesday's edition of the "Frankfurter Allgemeine Zeitung" newspaper, de Maiziere said he had already presented a draft bill that would allow the state to detain and deport asylum seekers suspected of posing a security threat.

The Christian Democrat politician wrote that he seeks to build federal deportation centers. Rejected asylum seekers would therefore be passed on from the centers run by states to those run by the federal government. "Deportations centers are already viable, legally speaking, and could be set up near airports," de Maiziere wrote.

Berlin has long tried to push the German states to speed up deportations. However, the debate has intensified following the attack in Berlin on December 19, in which 12 people were killed.

De Maiziere's deportation proposal comes as part of wider overhaul of Germany's security structure, which would expand the federal government's powers at the expense of individual states.

In addition to state-level policing, police forces acting at the federal level would be responsible for investigating and prosecuting unauthorized residents in Germany, thereby slowly establishing what de Maiziere labeled "a real federal police force."

"Those who seek to undermine our internal security, don't seek to do so in just one state," de Maiziere wrote.

Coupled with this, de Maiziere called for "sound legal bases" to carry out countermeasures and counterattacks in the event of a cyber threat.

De Maiziere has also proposed expanding the "far too restrictive" powers of the Federal Criminal Police Office (BKA). "We require common rules and better coordination, for example when it comes to protecting the more vulnerable," he said.

The interior minister also used the op-ed as an opportunity to criticize Europe's "inadequate" refugee and asylum policies.

"We need a robust mechanism against mass inflows that will protect Europe whenever and wherever the next migrant crisis occurs," de Maiziere wrote.

He called on the European Union to loosen the definition of "secure third countries" in which to settle refugees in its migrant directive. Only then could the EU strike a migrant deal with the North African countries, from which thousands of migrants attempt to flee to Europe every day. De Maiziere said the EU should look to partner countries in the UNHCR as potential "secure third countries."

Germany on edge ahead of election

Chancellor Angela Merkel has come under increased pressure ahead of this year's national election , following her now-controversial decision in 2015 to allow almost 1 million Middle Eastern refugees to settle in the country. The far-right Alternative for Germany party has directly blamed her "open door" policy for the December 19 attack in Berlin.

Merkel has said she felt sickened by the prospect of refugees committing terror attacks in Germany. In her New Year's speech, she called Islamic terrorism "without a doubt the most difficult test" facing Germany.