Germany to ease deportations for migrant criminals | Germany| News and in-depth reporting from Berlin and beyond | DW | 11.08.2016

Interior Minister Thomas de Maiziere reacted to recent violent incidents in Germany with a raft of new security measures. These included a new cybercrime unit and easing the deportation of foreigners deemed dangerous. 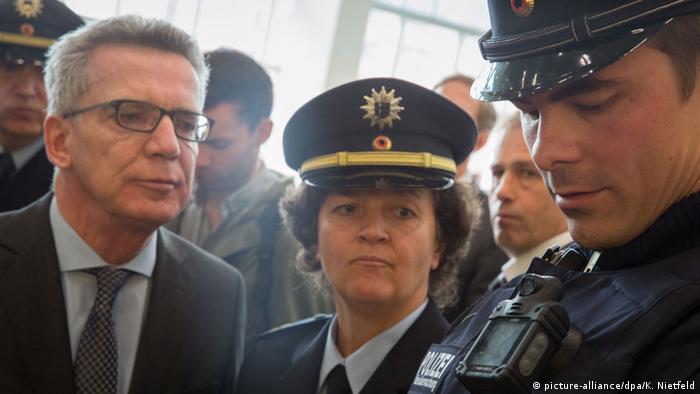 The German government is planning a host of new security measures in the wake of a few violent incidents in Würzburg, Ansbach and Munich. The measures include an increase in police personnel, a central crime unit for pursuing crime on the internet, easier deportation for migrants who have committed crimes, and depriving Germans who join foreign "terror militias" of their citizenship.

"I am convinced that these proposals will increase security quickly," Interior Minister Thomas de Maiziere told reporters in a special press conference in Berlin on Thursday, before adding that all the proposals could be implemented in this legislative period, which ends next fall.

One of the proposals was designed to make it easier to deport migrants guilty of crimes - or even potentially guilty. As part of Germany's Residence Act for foreign nationals, "endangering public safety" will be introduced as a reason to deport someone. "In this way, we will in future increasingly use the instrument of deportation for foreign criminals and people likely to pose a threat," the minister said in his statement.

On top of that, a new task force will be created to concentrate on speeding up individual cases of foreign criminals who are in line for deportation. A pilot project along such lines has already been set up in North Rhine-Westphalia. 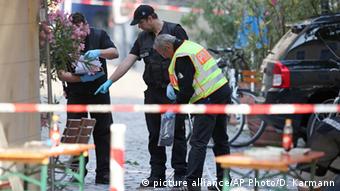 De Maiziere insisted that security forces had been continually strengthened throughout his tenure, but that new measures were still necessary. Apart from a 2 billion euro ($2.2 billion) increase in funding for the federal police, de Maiziere said that "technical capabilities" for "cyberinvestigation" would be gathered in a new joint unit - the "Central Office for Information in the Security Sphere" (ZITiS).

ZITiS will support security forces by developing "methods, products and strategies to fight criminality and terrorism on the internet." The new office will be set up at the beginning of next year and will eventually include 400 officials, including investigators specializing in trawling the so-called "darknet" for illegal weapons trading and terrorist communication. The teenager who shot nine people in a Munich shopping mall on July 22 is believed to have bought his gun illegally via the darknet.

De Maiziere also tried to diffuse the row that has developed in the last few days over his alleged plans to weaken doctors' obligation to patient confidentiality - potentially forcing doctors to report mental health patients who might pose a threat to public safety. The German Medical Association had preemptively warned against any such plans on Wednesday.

The minister said he was "aware of the sensitivity" of this problem and for that reason proposed a meeting between the government and the association's president, Frank Ulrich Montgomery, to discuss "how we can preserve the duty of confidentiality while reducing the risks for citizens as much as possible."

Similarly, de Maiziere sought a compromise on the row over dual nationality, another issue where state interior ministers (two of whom are caught in election campaigns) have been pushing for an outright ban. Instead, de Maiziere said that German citizens who fight for "terror militias" abroad would be deprived of their citizenship. On top of that, "sympathetic promotion" of terrorism would also become a crime.

Germany's new security plans also involve better prevention, with integration teachers being trained to deal with war trauma. In addition, refugees will be offered better opportunities to report signs of psychological changes or signs of radicalization among their peers.

'Slap in the face for populist agitators'

De Maiziere resisted calls from state interior ministers - and also members of his Christian Democratic Union (CDU) - to ban the face-covering Islamic dress the burqa in Germany. He called the idea "constitutionally problematic" and added: "You can't ban everything you oppose, and I oppose the wearing of a burqa." 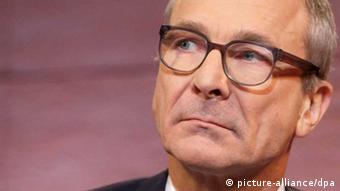 Sigmar Gabriel, vice chancellor and head of the Social Democratic Party (SPD), junior partner in Germany's governing coalition, showed satisfaction with the minister's plan, a day after warning the CDU against knee-jerk reactions.

"The SPD is ready to talk about anything that will contribute to heightening security," he told the "Funke Mediengruppe" newspaper group. "But we're not available for populist rush jobs."

He added that de Maiziere's refusal to entertain blanket bans on the burqa and dual nationality had been a "slap in the face" for the "agitators" of the CDU.

Opposition politicians were less enthusiastic about the tightening of laws governing foreign nationals in Germany. Volker Beck said de Maiziere's plans would do little to increase security. In a statement, the Green party's migration spokesman dismissed threatening jihadists with losing their German citizenship as "despairing politicking."

And Beck added that speeding up deportations was not as easy as de Maiziere suggested, not least because many refugees do not have valid papers. "The fact is that not a few embassies simply refuse to issue passports for those affected," he said. "Accusations and tightening residency laws makes precious little difference. We'd be better advised to give all people whose deportations are impossible for actual reasons the prospect of staying."

Media rumors that Berlin wants to weaken doctor-patient confidentiality so police can trace terror suspects have prompted protest. German physicians and several parties say a tradeoff of trust for security is untenable. (10.08.2016)