Thierry Baudet: The new face of the euroskeptic Dutch right

Thierry Baudet has emerged as the leading anti-immigration and euroskeptic voice in the Netherlands. His party's first place finish in local elections has shaken Dutch politics. 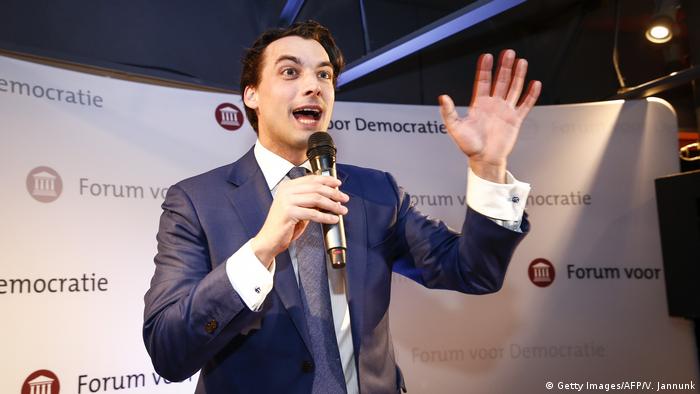 Thierry Baudet's Forum for Democracy (FvD) emerged as the top winner in local elections on Wednesday, taking 14 percent of the national vote. The elections determine the makeup of the Senate.

Read more: What does 'nation' mean to people in the Netherlands?

In the fragmented Dutch political system, where more than a dozen parties won seats, that relatively small proportion of the electorate was enough to put the FvD on top, with 13 seats in the 75-member upper house of the legislature.

Rutte's center-right People's Party for Freedom and Democracy (VVD) won 12 seats. His four-party coalition's representation fell from 38 to 31, meaning it will have to look for new allies for support.

Baudet took votes from three of the four parties that make up Rutte's ruling coalition, as well as from the anti-Islam Geert Wilders and his Party for Freedom (PVV) and the left-wing Socialist Party.

The 36-year-old Baudet emerged on the political scene two years ago with the founding of the FvD, which took two seats in the much more powerful 150-member lower house of parliament following the 2017 elections.

The party opposes immigration and much of the funding for climate change legislation and seeks a referendum on the Netherlands' membership in the European Union.

A star of the Dutch alt-right, Baudet has used populist rhetoric to slam elites, journalists, multiculturalism and "political correctness." In apocalyptic tones, he speaks of the threat posed by immigration and the European Union to the nation-state and Dutch identity.

Read more: Where do the EU's right-wing populists stand on climate protection?

Baudet has also made controversial comments on gender, remarking that "women in general excel less in jobs and have less ambition."

In one of his books, Oikophobia: The Fear of Home, Baudet laments cultural relativism and multiculturalism, which, he writes, lead to loathing of one's own culture. In another book, Break the Party Cartel, he describes the Dutch political class as a cartel.

"We stand here in the rubble of what was once the most beautiful civilization,"  Baudet said in his victory speech, using classical references.

"We are going to start a renaissance in which our self-confidence is restored, in which we can live safely in a trusted environment, in which the democratic state is repaired and economic and cultural dynamism can return," he said. 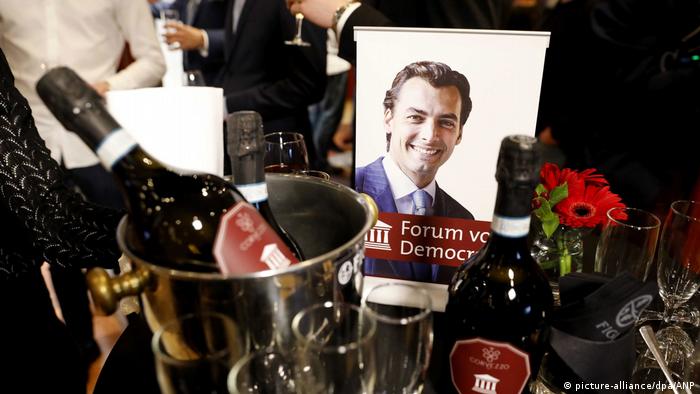 On his social media accounts, the erudite Latin-quoting and philosophy-reading Baudet shows off highbrow cultural pursuits such as playing the piano in his office.

Baudet, who has a law doctorate, has placed himself in the tradition of Pim Fortuyn, who had blamed immigrants for crime and accused them of failing to integrate into Dutch society. Fortuyn was assassinated in 2002 by an animal rights activist.

Fortuyn was followed by Wilders and the PVV, which espouses a virulent anti-Islam rhetoric. Now, the more sophisticated-speaking Baudet appears to have overcome Wilders.

"Baudet's success reflects not so much a surge of the nationalist right as a shuffling of the pack among the populist parties. Nearly a third of his vote came from supporters of Wilders' PVV, which is looking increasingly like a spent force," Gordon Darroch wrote in an analysis on DutchNews.nl.

In a move that surprised many of his friends and colleagues, former far-right Dutch politician Joram van Klaveren has converted to Islam. As a former member of Geert Wilders' PPV party he now says he was wrong. (05.02.2019)

It hasn't taken this long to form a Dutch government since 1977. Four parties will come together to form a coalition that will only have a majority of one seat in the lower house. (09.10.2017)