"The White Tiger" has topped Netflix charts and garnered critical acclaim outside India, but does it merely replicate existing cliches about the country? Adarsh Gourav (pictured right), plays the role of Balram in 'The White Tiger'

Based on Aravind Adiga's Booker Prize-winning novel, The White Tiger is currently ranked the most popular film on Netflix worldwide. Featuring Bollywood actors Adarsh Gourav, Priyanka Chopra and Rajkummar Rao, the film tells the story of Balram, a young boy who is forced to drop out of school after his poor father dies. To support his remaining family he does odd jobs, breaking stones and working in a tea stall.

Despite his falling on hard times, Balram has not forgotten when a teacher called him a "white tiger" and thus complimented him for his strength to speak up in class. As a "white tiger" — a special person — his sole aim is to break out of "the coop" of his class and caste and make it big in life.

Balram is the quintessential Indian underdog, from a poor, low-caste family of servants. After finding a job as a driver, he kills his employer to break out of his "servant" identity and establish a new life with a new name. 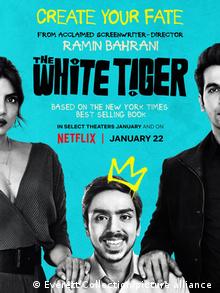 "It is very real and more than anything else, it is a statement about humanity. It is the hero's journey…It's a mirror for Indians who crave power and like to live a certain lifestyle without thinking about the kind of impact it has on people who are ‘serving' us."

Choudhary, who grew up in northern India and around Dhanbad, where the film is set, also feels that the depiction of lower castes in Balram's village Lakshmangarh is accurate. There are scenes from the village in which poor, low-caste members beg their landlords for money or work.

The narrative of the movie lives from contrasts. For example, in Gurgaon, a suburb in Delhi, Balram's employers live in a fancy apartment block while he, like other drivers, is banished to the basement.

The film "makes us realize that Balram, who represents people from that section of society, is not so because of choice, but because they have been oppressed to be that way," Choudhary says, referring to the "born-to-be-a-servant" mentality that the film's protagonist is constantly aware of. The movie "brings out the class-caste rift that we [Indians] have all seen day-in and day-out but have chosen to be blind to," she adds.

But does it make sense to compare a work of fiction with reality in the first place? "I hate this idea of movies being a reflection of reality because movies are artificial constructs. It is a staged reality," says Indian film critic Bharadwaj Rangan.

In the movie, like in the novel, Balram tells his story through the letter to the Chinese premier Wen Jiabao, who will soon be on a state visit to India. The film makes it very clear that the story is not reality, because the letter is the "distancing device" that is implemented to tell the story, Rangan says. "When we write letters, a certain formality creeps into our writing. What we speak versus how we write an e-mail are two very different things."

This is also the reason why many characters in the movie communicate in English, Rangan says. Many Indian viewers have poked fun at Indian villagers speaking English in the movie and the lead actors Priyanka Chopra and Rajkumar Rao's strange in-between India and US English accents.

In India, English is still considered a language of the priveleged classes and a means to climb the social ladder. But for Rangan, this fact does not affect the way he sees the movie, because using English is a creative choice and one made for the sake of consistency, since the book was written in English. "For instance, in old Hollywood films … French speak English in a French accent, whereas in reality, [they] would be communicating through a translator."

Ultimately, Rangan agrees that The White Tiger is "a story of somebody who's an outsider in India. The movie makes it very clear that it is the people who have the power and the money who are the real insiders."

Having said that, it is unlikely that the movie has a mass appeal in the country it was made in, also because Netflix is one of the more expensive streaming platforms in India. "To be able to afford Netflix itself is a privilege," Rangan explains.

According to author Anu Singh Choudhary, The White Tiger has been one of the top 10 movies in India, "but it is meant for a global and a niche audience and it is not something that will entertain or provide instant gratification," Choudhary says.

"It's a film that makes you uncomfortable, it makes you think, it makes you question and that's not what a large part of Indian audiences are interested in. They are already burdened by so much that is happening around them. It's all there, starting from the farmers' protests in Delhi to so many personal and political conflicts that we see on a regular basis. It's not a film many people will watch because we all know this," she adds.