Why India′s Dalit women are vulnerable to sexual violence | Asia | An in-depth look at news from across the continent | DW | 28.10.2020

The recent rape case of a 19-year-old Dalit woman in northern India has shed light on how lower-caste women are disproportionately affected by sexual violence. Tanika Godbole reports from New Delhi. 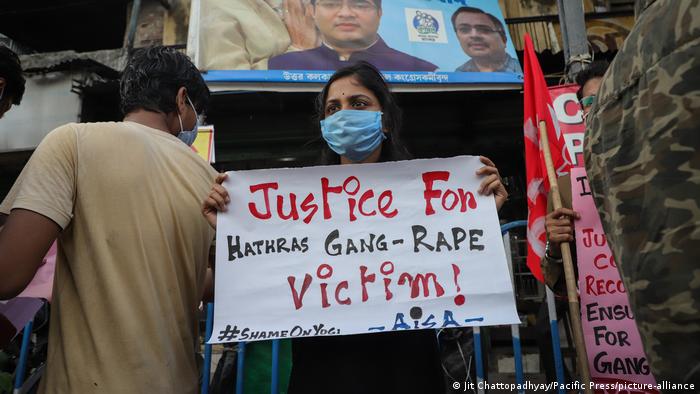 A 19-year-old Dalit woman in India's northern state of Uttar Pradesh died late last month after reporting she'd been gang raped and brutally assaulted by four upper-caste men. After fighting for her life for two weeks, the victim died in a New Delhi hospital.

According to media reports, police in Uttar Pradesh quickly cremated the victim in the middle of the night without the consent of her family, barring journalists and opposition politicians from visiting her village and family in the district of Hathras. The government denies these claims.

The Hathras case prompted suspicions of complicity and cover up by police and Uttar Pradesh state officials, capturing the attention of national and international media.

"They brutalize and intimidate Dalits so that our community knows their place and feel too intimidated to seek better wages and rights that should be guaranteed to them," Dalit rights activist Thenmozhi Soundararajan told DW.

Dalit, also known as the "untouchables" in India, languish at the bottom of the South Asian country's caste hierarchy. Dalit women, who make up 16% of India's female population, face higher risks of gender and caste-based violence and are often exposed to widespread sexual violence.

At least 10 Dalit women are raped per day, and their vulnerability to rape has increased by 44% in the last 10 years, according to a report by the National Crime Records Bureau of India.

AHuman Rights Watch (HRW) report found that one of the reasons Dalit women are more vulnerable to violence is because they make up the majority of India's landless laborers and scavengers, and a significant percentage of them are forced into prostitution or sold into brothels.

For this reason, Dalit women are more likely to come into contact with landlords and enforcement agencies, who can then easily exploit and abuse them with impunity.

"For centuries, landowning castes terrorize the Dalits. They live and work their lands as their own private kingdoms," said Soundararajan.

For many Dalit women, law and order systems are not accessible. Women seeking to file police complaints often find it difficult to do so. Evidence collection and witness testimonies are even more challenging. Police are slow to register complaints, investigations concerning Dalit women are often delayed, and officials often raise doubts there was a rape.

If a case manages to be filed, the woman is likely to face new obstacles before a judge "whose gender biases and caste affiliations can greatly influence the judgment in the case," HRW reported.

Witnesses rarely agree to come forward to testify or corroborate the victim's statement for fear of retribution from perpetrators, who are often in positions of relative power in the community.

"Caste-based violence is quite common, but it doesn't receive coverage in upper-caste dominated newsrooms. It's common for Dalit villages to be burnt down, for the cops to refuse a post-mortem for women who have been raped, for the local administration and upper-caste people to suppress cases filed by Dalit people," activist Manisha Mashaal told DW.

But the Hathras case, unlike most atrocities against Dalit women, made global headlines and sparked nationwide protests.

"What made the Hathras incident stand out is the blatant gaslighting and harassment that Dalit families face in the wake of such heinous crimes. It was captured for the world to see," said Soundararajan.

Many equated the Hathras case with the 2012 bus gang rape of 23-year-old Jyoti Singh in Delhi.

The rape triggered mass demonstrations and resulted in a significant increase in public discussion of crimes against women in India. But activists argue that India's legal system remains slow in hearing and prosecuting rape cases, even more so in cases concerning Dalit women.

"The atrocities are immense against Dalit women, and the rape case in Hathras is just the tip of the iceberg," said activist Mashaal.