Hundreds were arrested after lower-caste Dalits took to the streets to protest attacks on their communities. Opposition politicians in the state government accused the ruling party of tolerating nationalist violence. 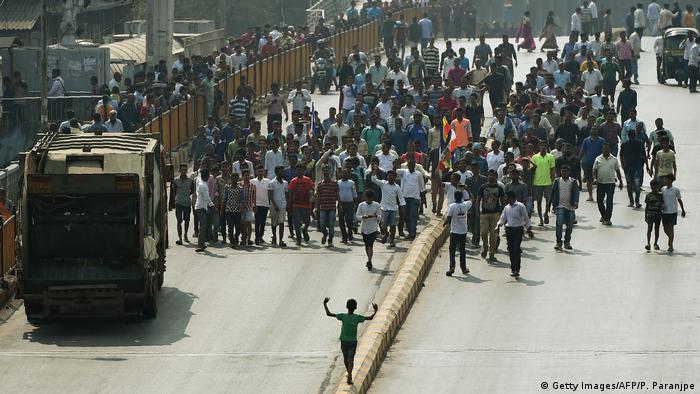 Protesters from India's lowest castes brought parts of Mumbai to a standstill on Wednesday following violence from Hindu nationalists.

One member of the Dalit — formerly known as the "untouchable" — caste, was killed in a Mumbai's Maharashtra state on Monday during a ceremony to commemorate a 200-year-old battle.

A group of Dalits had gathered to mark the anniversary of the battle of Bhima-Koregaon in 1818 when they helped the British defeat higher-caste elites.

Demonstrators blocked roads and railways in India's financial capital, resulting in 100 arrests as many businesses and schools remained shuttered in anticipation of more violence.

The government of Maharashtra has called for an official investigation into the violence.

In the regional parliament, the opposition Congress party has alleged that "anti-Dalit violence is increasing" under the rule of the nationalist Hindu Bharatiya Janata Party.

Although anti-Dalit discrimination is illegal under India's constitution, atrocities and violence against low-caste groups are common in parts of the country.

Dalit man beaten to death at Hindu festival in India

A man from the Dalit, the lower caste in Indian Hindu society, has died after being attacked while attending a celebration of the Hindu festival of Navratri. Eight men have been detained and charged with murder. (02.10.2017)

Indian lawmakers are voting between two presidential candidates from the lowest Hindu caste. PM Narendra Modi hopes his candidate will help Hindu nationalists get support from Dalits ahead of the 2019 general election. (17.07.2017)

Ram Nath Kovind, a low-caste Dalit, has been elected as India's president. Kovind was chosen for the post by the ruling BJP party in a largely symbolic move, which experts say is unlikely to improve the Dalit situation. (20.07.2017)