The thriving gardens at the heart of Rio de Janeiro's favelas

In one of the most dangerous and deprived neighborhoods in the Brazilian city, residents are now finding hope and employment by growing fruit and vegetables.

Gardening for a better life

In the place where just a few years ago waste piled up high, fruit and vegetables are now thriving. In the heart of Manguinhos, a favela in Rio de Janeiro, residents have cultivated the largest community vegetable garden in Latin America. On an area roughly the size of three football fields, they produce around two tons of food per month without the use of artificial fertilizers.

This is providing a new lease of life for the community. Manguinhos is one of the most deprived and dangerous favelas in the city, where violence and fatal shootings are commonplace. 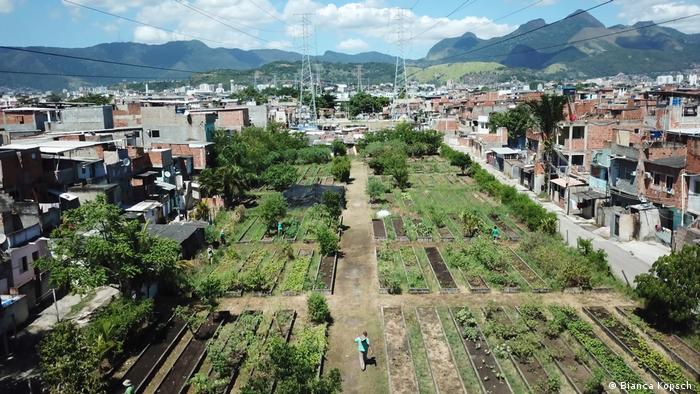 Unlike most farming in Brazil, the community gardens don't use artificial fertilizers

Many here see little hope for the future. In daily life, there is a lack of basic necessities: regulated sewage disposal, garbage collection, healthy food and professional opportunities.

The Manguinhos vegetable garden is part of an initiative by the city government that now encompasses around 50 community gardens. The gardens offer employment and affordable food to a variety of deprived neighborhoods.

A film by Bianca Kopsch

Gardening for a better life