The Power of the Desert Sun

In Morocco, the government, together with German financing, is backing solar energy -- but not because it's the most environmentally friendly solution, but rather because it's the cheapest. 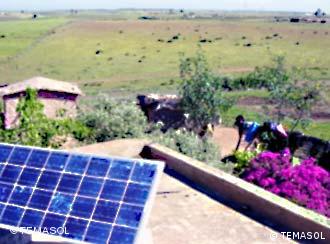 Solar panels give this Moroccan village clean and affordable electricity.

For many people, ''environmentally friendly" means "keep clear -- rich people only". But Morocco has made itself one of the two largest users of solar-generated electricity in the world by bringing the latest in eco-tech to the poor.

“Our objective is to provide electricity to all the people of Morocco by 2007,” says Ahmed Acharaani, regional technical director at the Moroccan electricity utility ONE. “That means getting electricity to 10 million people that don't have it today.” 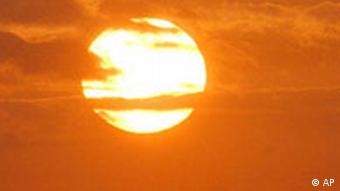 The sun rises over the desert.

Acharaani explains that most of these households will be hooked up to the existing power grid. “But at least a million people live in remote, rural areas, where it's cheaper to use solar power,” he adds. “We've got the sun, we should use it!”

Solar power kits are available at local markets. The most basic kind consists of a panel, a battery, four lamps and a socket. 40 percent of the price is covered by a government subsidy which, in turn, is financed via Germany’s reconstruction bank Kreditanstalt für Wiederaufbau (KfW). The kits costs close to what city dwellers pay for the electricity they get from the grid.

Electricity is just the beginning

Some 40,000 Moroccans already use solar-powered electricity. By 2007, the government says this number will jump to a million.

The company that has so far gotten the lion's share of the booming Moroccan solar power business is Temasol. It’s a joint venture between the French oil and electricity companies Total and EDF. 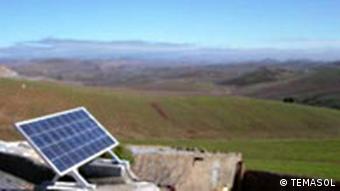 Solar energy is an up-and-coming industry in Morocco.

Temasol won the first tender to supply 16,000 solar power kits and reckons it's well placed to win the next contract for another 150,000 this year. Executive director Stephane Maureau says they're doing more than selling a product, though.

“The idea is that we do not sell equipment, we sell a public service,” Maureau explains. And this has led to an interesting development. “We have noticed that where we install the systems, people feel they can now demand other public services,” he says. “Very often people ask ‘do you think we could have water at home, too?’ after they get solar energy at home.”

The environmental benefits are secondary

Morocco is hoping to bridge the energy gap to the rich countries of the North through this mixture of the free market, government and foreign involvement.

But the environment doesn’t play a central role here. Promotional ads aimed at that large part of the target market that can't read don’t make a big deal out of the ecological benefits of going solar.

In fact, that goes for just about everyone involved in Moroccan solar power: from the government to the hill farmers who now have light in their homes. In the country that’s become a beacon of hope for alternative energy, the environment is an afterthought.

EPIA is the world’s largest industry association devoted to the solar electricity market. It aims to promote photovoltaics at the national, European and worldwide levels.