Since the US invasion of Afghanistan in 2001, every election there has been more fraudulent than the last. Experts say that's a consequence of the nation's shaky democratic foundations. 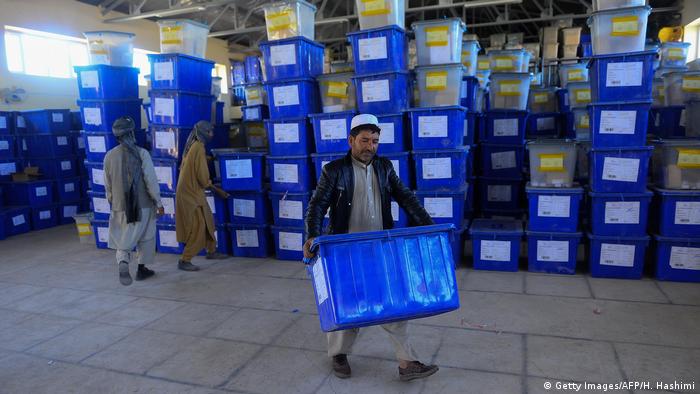 When the US-led international coalition toppled the Taliban regime in Afghanistan in 2001, it triggered hopes of a democratic awakening in the war-ravaged country.

But 17 years later, it's not difficult to conclude that those hopes have remained unfulfilled. Allegations of fraud and irregularities marred the 2004 presidential elections and the 2005 parliamentary polls.

But as those elections were the first to be held after decades of war and civil strife, many believed the situation would improve over time. Expectations were dashed in the 2009 presidential vote, which was characterized by security issues, accusations of widespread ballot stuffing and other electoral fraud.

A run-off vote between the then presidential candidates Hamid Karzai and Abdullah Abdullah was canceled after Abdullah refused to participate, and Karzai was declared president for another five years.

The decline in the quality of Afghan elections continued in the 2010 parliamentary polls, when many former warlords and strongmen secured seats in the legislature.

The real wake-up call for the international community, however, came with the 2014 presidential elections, which took the country to the brink of civil war.

The presidential candidates at the time, Ashraf Ghani and Abdullah Abdullah, both claimed victory and their followers threatened to establish parallel governments if their leader wasn't declared the winner.

A candidacy for survival in Afghanistan

The crisis was defused only after the US intervened and brokered a power-sharing deal between the two leaders.

The country's poor track record doesn't do much to instill confidence in the ability of Afghanistan to hold free and fair elections. The worsening security situation adds to the authorities' problems and complicates their efforts to hold polls.

In this context, public expectations about the upcoming parliamentary elections have remained subdued, even by Afghan standards.

Given the current security challenges, we can only take initiatives to "limit fraud," said Ambassador Pierre Mayaudon, the European Union head of delegation to Afghanistan.

"I think what is important is that they [the vote results] are acceptable to the people of Afghanistan — meaning that fraud should be limited," Mayaudon told DW.

Read more: Save the Children: Afghanistan is not safe for children

The deteriorating security situation is exerting a heavy toll on not only Afghan voters, but also candidates. Since the launch of the electoral process for the parliamentary polls scheduled for October 20, at least 10 candidates have been killed by insurgent attacks.

Militants have also killed or wounded hundreds of Afghans over the past couple of months.

The Taliban and other insurgent outfits have vowed to attack the upcoming elections, claiming that they are imposed on Afghans by foreigners. The Taliban have recently warned students and teachers, telling them to stay away from the vote and not to allow schools to be used as voting centers.

Escalating poll-related violence and expectations of fraud could discourage Afghans from casting their ballots, say observers. "Why would they want to risk their lives to vote in an election that is sure to be far from flawless," asked Michael Kugelman, a senior associate for South and Southeast Asia at the Washington-based Woodrow Wilson Center for Scholars.

How did Afghanistan end up here?

One would expect Afghanistan to have much better democratic foundations after more than 17 years of international involvement in the nation's security and development. Yet, electoral institutions have so far failed to conduct Afghan elections in a transparent, free and fair manner.

"The idea of accepting election results even if you lose has never gained traction among many former warlords who believe they deserve a share of power," said Faiz Mohammad Zaland, lecturer at Kabul University. "Afghan electoral institutions haven't been powerful and transparent enough to make votes the only deciding factor," he told DW. "The West tried to prematurely impose democracy on Afghanistan without strengthening the needed foundations," Zaland added.

Another factor that has contributed to the failure of elections in Afghanistan is the absence of political parties that are idea-centered. Most of the roughly 50 registered political parties in the country are extremely dependent on certain individuals with no or very weak ideology.

Most leaders of major Afghan political parties are accused of committing human rights abuses during the Afghan civil war in the 1990s. "This has made it very difficult for the international community to justify supporting such figures and parties after the collapse of the Taliban regime in 2001," Zaland said.

After the upcoming parliamentary polls, Afghanistan will hold presidential elections next year and many fear the country's administrative and security situation could deteriorate further by then.

The Helmand politician was speaking with advisers about the upcoming elections when a bomb planted in his sofa exploded. Several candidates have been assassinated across the country ahead of parliamentary elections. (17.10.2018)