The Guerrilla Girls' fight against discrimination in the art world

The art world discriminates against women and people of color: that's what the Guerrilla Girls have been demonstrating and protesting against for three decades. The New York activists' struggle is far from over.

"Women can't paint that well. It's a fact." One would think that such a sexist sentence came from a time when women weren't allowed to vote or to have a bank account in their name. Yet it was actually a statement made in 2013, not too long ago, by one of the most famous and successful painters of the world: German artist Georg Baselitz.

The Guerrilla Girls, a group of feminist activist artists who first formed in the US in 1984, have been fighting discrimination against women in the art world for decades. But even they didn't expect such nonsense to still exist today.

However, they would probably agree with another comment Baselitz made in the same interview with the German weekly "Der Spiegel": "Women simply don't pass the value test of the market." This is something the Guerrilla Girls have repeatedly observed, too. The activists, however, do not believe women themselves are responsible for this situation; they rather blame the established structures, with the interplay between collectors, patrons of the arts, auction houses, museums and galleries.

An incomplete survey of international art

The Guerrilla Girls came together as a reaction to the exhibition "An International Survey of Painting and Sculpture" shown at the Museum of Modern Art in New York in 1984. The retrospective claimed to review the world's most important contemporary art. Yet among the 169 artists on show, only 13 women were to be found. Additionally, all artists were white and came from the US or Europe.

Could one seriously consider this to be a representative retrospective of contemporary art? Curator Kynaston McShine insisted it was - and even said that artists who weren't part of the exhibition should reconsider their choice of career.

The exhibition drew protests outside the museum - and led to the creation of a new group of activists, the Guerrilla Girls, who defined themselves as "the conscience of the art world."

One of the first things the Guerrilla Girls did was to count. They wanted to find out how many solo exhibitions by women were held in major US museums; how many female artists were on show in galleries and how much they were paid. The results were alarming. They published them on posters, stickers and flyers and were the first to publicly denounce sexist discrimination in the art world. 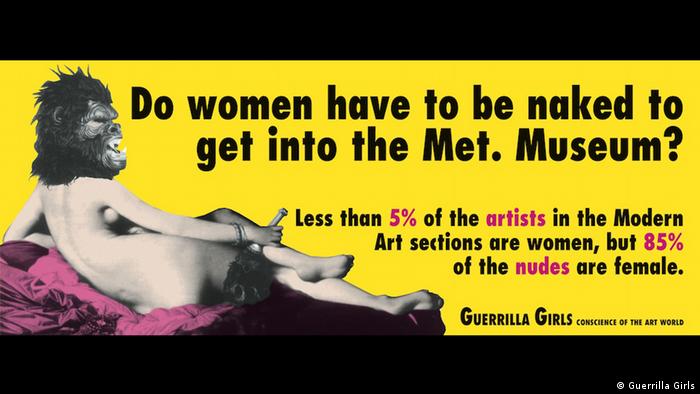 From guerrilla to gorilla

The activists' credibility was boosted by the fact that they were truly part of the art scene, either as artists or working in related institutions. Very famous artists were also among them, as the German feminist magazine "EMMA" revealed last year.

All of them act anonymously, to avoid having their activism affect their career and to allow their message to remain in the spotlight.

They hide their identity under a gorilla mask - a concept that came up without being planned: "At an early meeting, an original girl, a bad speller, wrote 'Gorilla' instead of 'Guerrilla.' It was an enlightened mistake. It gave us our 'mask-ulinity.' "

Along with the furry ape masks, each of the Guerrilla Girls preserves her anonymity by using the name of a famous artist. The founders use the pseudonyms of Käthe Kollwitz and Frida Kahlo, for example.

In their 30 years of activism, about 50 members have been involved in the group. Some of them have stayed active for decades, others for a few years, while some have joined for just a few weeks. The Guerrilla Girls decide for themselves if they want to invite new people to join. They prefer to keep membership restricted to be able to further act in their own style, they told DW.

Humor as a weapon

One of the trademarks of the art of resistance done by Käthe Kollwitz, Frida Kahlo and co. is their sense of humor. "We found out quickly that humor gets people involved. It's an effective weapon," said one member in an interview in their first book "Confessions of the Guerrilla Girls" from 1995.

Their 1985 poster already demonstrated this well, asking if women had to be naked to be on display in the Met. The campaign they prepared for the Venice Biennale in 2005, "Free the Women Artists of Europe!" was equally provocative. 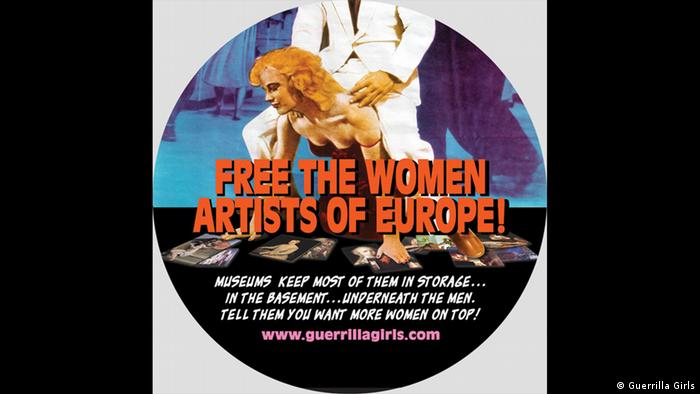 Although the Guerrilla Girls mainly focus on the art scene in the US, the activists also recently conducted a survey on artists' diversity in 400 European museums. The results were made public at a free exhibition at the Whitechapel Gallery in London. Revealingly, only 100 institutions agreed to respond to the Guerrilla Girls' 14-question survey. Some results are reproduced on the group's website, in their typically humorous style.

A system dominated by white men

The question remains: Who is to blame for the discrimination against women in the art world? If you ask the Guerrilla Girls, they'll tell you it's above all rich white men. "Museums are increasingly dependent on super rich collectors' donations of money and artworks - and these collectors are usually white men, who predominantly collect art created by white men." Consequently, museums are no longer documenting the history of art, but rather the history of wealth and power, conclude the activists. 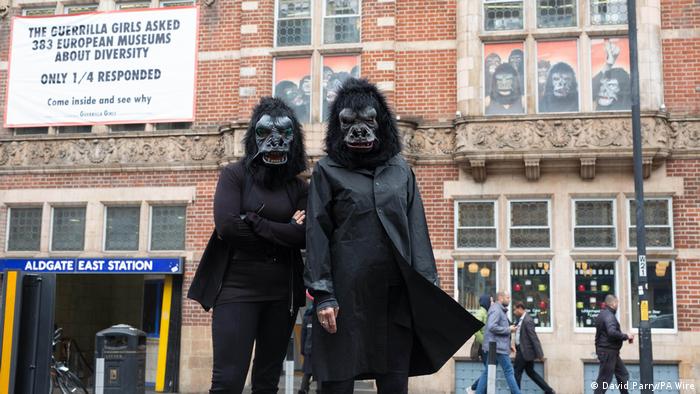 Two Guerrilla Girls in front of the Whitechapel Gallery in London

Meanwhile, it's not only in the US that support for the arts is being privatized. Germany's collectors - who are also mostly male, prosperous business owners - have become increasingly important figures for the country's museums throughout the last years. "Museums often collect collectors nowadays. Without them, they couldn't do any new acquisitions for their collections," says Bernhard Graf, director of the Institute for Museum Research in Berlin.

Would more women at the top solve the problem? Not necessarily. In 2013, the German publication "art-Magazin" discovered that female collectors do not automatically collect more art by female artists, and that the top galleries directed by women represent on average three times more men than women.

It goes way beyond writing contemporary art history, however, according to Kerstin Brandes, director of the Institute for Art and Visual Culture at the Oldenburg University. "Until now, the predominant discourse depicted the artist as a creative genius. And this genius has always been a man, while the woman is the muse, the model. For great artists, nude women were always a compulsory motif." Universities, responsible for preparing future museums directors, should therefore see to changing views on female artists in a lasting way. 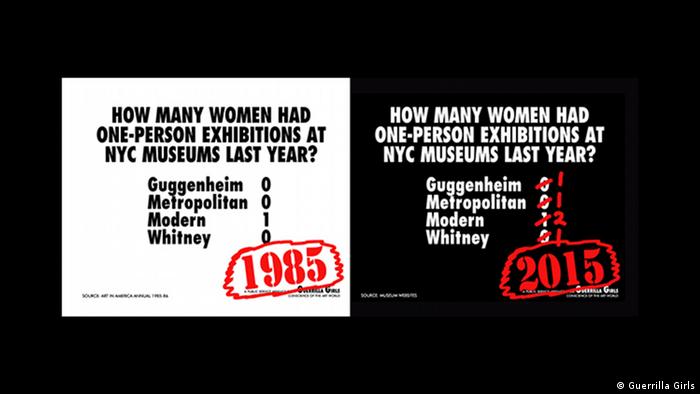 When the Guerrilla Girls counted the number of solo exhibitions by female artists in New York museums in 1985, only one woman was to be found. Thirty years later, they counted again. This time, five were showing.

The number is larger, but such results aren't something to rejoice about completely yet.  Female artists still don't enjoy the same prestige as their male colleagues.

Still the Guerrilla Girls notice an improvement: "When we began, no one wanted to admit that they were discriminating women or artists of color. Today, museums are working towards more inclusion. It still remains difficult to turn this big ship around."

Until they manage to achieve that, the Guerilla Girls will continue their finger pointing.

Virgin, vamp or housewife -  is that all?

Women's emancipation influences the German media more and more, but some clichés still survive. How it's changed since the 1950s, where we are today, and what can women hope for in the future. (08.03.2017)