The ′excruciating pain′ of a scorpion sting | Science| In-depth reporting on science and technology | DW | 06.09.2017

The 'excruciating pain' of a scorpion sting

Scorpions have a bad reputation. Namibian scorpion researcher Martin Handjaba says it's unjustified. He tells DW about their painful stings, why they glow under UV light and why we shouldn't kill them. Parabuthus villosus is one of the most venomous scorpions in Africa

DW: Mr. Handjaba, what was the most dangerous scorpion species you’ve held in your lab?

Martin Handjaba: We had two black ones, called Parabuthus villosus. They’re notorious in this area of Namibia. They're highly venomous and up to 20 centimeters [8 inches] long. They’re quite difficult to handle - we always have to exercise caution. Their venom can be up to five times more potent than that of a Cape Cobra.

How do you handle such venomous scorpions?

I normally use scorpion-handling gloves or grab them with biological tweezers. Unfortunately, tweezers are not strong enough to hold the big scorpions. Those scorpions also spray venom like a spitting cobra does. It can go straight into your eyes and is very painful. Still, I sometimes handle my scorpions just with two fingers - even though I know I shouldn't.

Have you been stung by one?

Yes, the pain is really excruciating. Almost every scorpion researcher has been stung by a dangerous scorpion at one point. I am one of them. But we scorpion researchers are lucky - it never really becomes fatal for us. Scorpions are our friends.

How is it non-fatal when a big, venomous scorpion stings you?

Yes, they all act differently. Some are quite relaxed. But there is always one or two of the same species that are more aggressive than the others. Those will give you a full dose - just because they can. That's especially true for the young ones. Young animals like showing off what they’ve got.

If you get stung by a scorpion and you don't know the species, is there a way to find out if it was a venomous or non-venomous one? 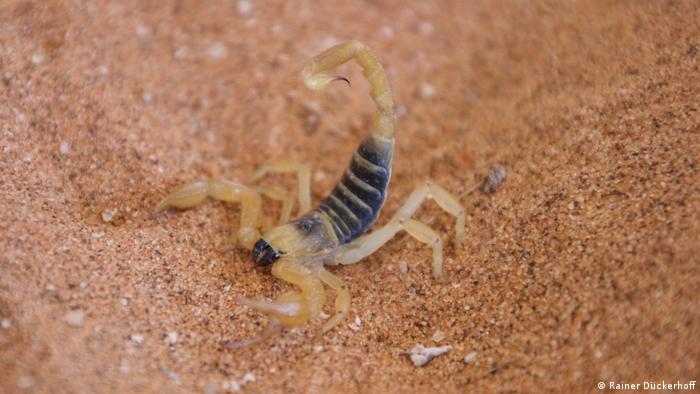 Opistophthalmus holmi: A small tail and big arms means this scorpion is not quite venomous

Is there a reason you study scorpions here, in the middle of the Namib desert?

The density of scorpions in the desert is much higher than in any other place in the world. We don't know why. Why do they want to live in such a dry area? Obviously there is something.

How can scorpions cope with this barren environment?

They are very energy efficient. For example, Parabuthus villosus can go up to a year without a single meal. They can adapt to an area like this, where food is not always available. Other animals cannot survive that.

Have they adapted to the heat as well?

Yes, they have hairs on their bodies, you have to look really closely to see them. Studies have found that some of those types of hair help to reflect sunlight. Some are silver like a mirror, they reflect all light, it just bounces off and back. Other hairs are white, they reflect some of the UV light. The reason scorpions glow under a UV light is that there is a chemical in the exoskeleton that reacts to UV light.

Yes, they glow a greenish, bluish color - even though under actual light they are brown or black. All the scorpions in the world, over 3,000 species - they all react that way to UV light. The darker they are, the brighter they glow under UV light. 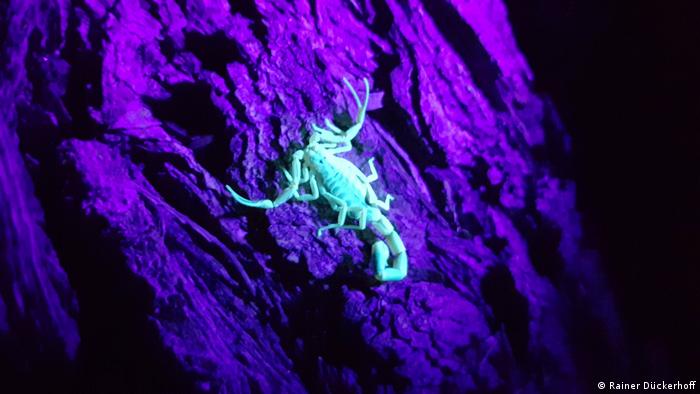 The chemical in the exoskeleton is breaking down. If the animals walk around during the day, it completely disintegrates, because the UV radiation from the sun is much higher than that from the UV light.

So I guess scorpions are more fascinating than most people think. But are they also useful?

They are top predators here, especially in the driest part of the year. They control the number of insects so that they don't get out of control. The desert is a very delicate system. Once you get too much of anything, it depletes the whole system, and everything dies.

If I want to see a scorpion in the wild, where should I look?

Some live in burrows underground, some under rocks, and some in trees.

Yes, those are the tree scorpions. In a normal tree here in the Namib desert, you find about 30 to 80 scorpions. During the day they hide under the bark, where it is really cool. They come out when it’s cooler, starting to venture out, looking for food and mates.

Why did you decide to research scorpions of all animals? 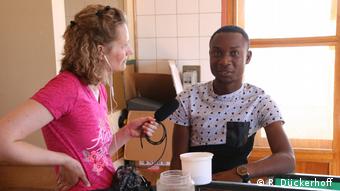 I think it’s high time that we understand scorpions. For example, we don't even know the distribution of the scorpion species we have around here. We get a lot of problems with scorpion stings in towns, and a lot of people die because of that. But we don't even know which type of scorpion did it. And then people just kill off any scorpions they see no matter which species. So people kill scorpions, scorpions kill people. We try to prevent both.

What if I encounter a scorpion in my house? Isn't that a reason to be afraid? It could be really venomous…

Martin Handjaba is a senior research technician at the Gobabeb Research and Training Centre in Namibia. He investigates the diversity and behaviour of burrowing scorpions in the central Namib Desert.

Scorching hot by day, freezing at night, scarce water and food supplies - the Namib desert in southern Africa is a hard place to live. But these animals have found ways to cope with the hostile conditions. (14.08.2017)

Many people fear them, some people love them. In any case, snakes are fascinating and versatile. From the most venomous snake to ones that can fly - here are the most amazing snake species that evolution has given us. (14.07.2017)