Why life thrives in the foggy Namib desert | Science | In-depth reporting on science and technology | DW | 14.08.2017

Why life thrives in the foggy Namib desert

The Namib desert in southern Africa is a hostile place: scorching hot by day, freezing at night, and there is little to eat in the barren landscape. But an amazing array of species has evolved here. Here's why.

We all know the golden rule: where there is water there is life.

But water can take many forms - it doesn't have to appear as rainfall or flowing rivers. And in the Namib desert water comes as fog.

It is all due to the Benguela current, a cold ocean current which brings icy waters from the depths of the Atlantic Ocean to South Africa's and Namibia's western coasts.

"The Benguela current interacts with warm moisture above the sea surface," says Roland Mushi, a research technician at Gobabeb Training and Research Centre in Namibia, in the middle of the Namib desert.

"The moisture is cooled down to form dew and then fog," continues Mushi.

Prevailing south western winds push the fog into the desert. 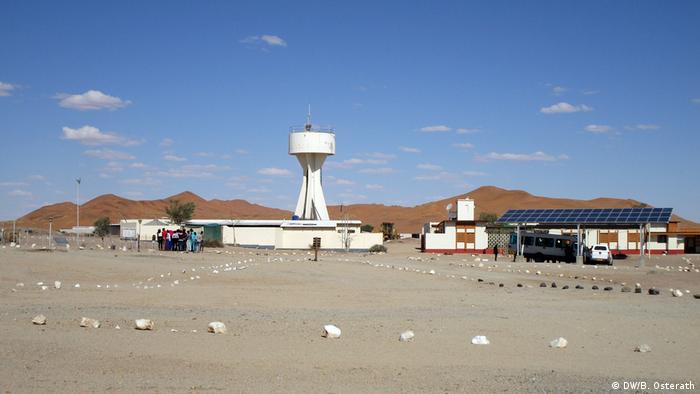 Gobabeb - a desert research center in the middle of the Namib

There aren't many foggy deserts like the Namib, but the Atacama desert in Chile is one other example.

Swakopmund on Namibia's Atlantic coast is a beautiful city, with its German colonial architecture, but the fog sometimes drives the residents crazy.

The city lies in a hotspot where the fog forms. So Swakopmund residents experience about 300 days of fog each year.

The fog forms in the early morning and stays for several hours, until about 10 am when it gets warm enough for the fog to clear.

While the people in Swakopmund complain about the fog, life in the desert desperately waits for it. 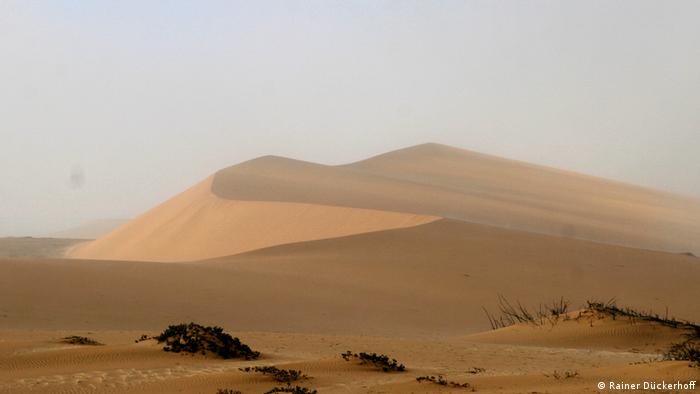 The fog over the dunes vanishes into thin air before noon

Evolution at its best

Desert plants like Welwitschia and Nara have evolved to take up water from the fog through very fine roots or through their stems, respectively. These plants only grow in the Namib.

Also, beetles and other insects in the desert collect moisture from the fog - and have found quite peculiar ways to do so.

The fog basking beetle, for example, harvests water by pushing his bum up into the air. Fog condenses on his behind and water droplets run towards its mouth for the animal to drink.

Another species of beetle, Lepidochora porti, digs trenches in which the fog collects and condenses. Geckos, snakes, birds and many other animals feed on the beetles.

Almost 300 animal species exist in the dune field of the Namib desert alone. Over half of those do not exist anywhere else in the world.

The area is listed as a natural World Heritage Site due to its beauty and biological value.

Scorching hot by day, freezing at night, scarce water and food supplies - the Namib desert in southern Africa is a hard place to live. But these animals have found ways to cope with the hostile conditions. (14.08.2017)

Plenty of desert, little water, not much land for agriculture: Jordan is a country with extreme living conditions. The knowledge of the Bedouins shows us how to handle nature with care. (26.05.2017)

Hardly anybody will ever see a black-footed cat. They are only about half the size of domestic cats and live in the savannah of southern Africa. German zoologists are trying to find out how many of them are still there. (08.08.2016)

Making moisture in the desert

Building a wall to keep the desert out