The Copts: A Christian minority with a long history | World| Breaking news and perspectives from around the globe | DW | 05.01.2011

The Copts: A Christian minority with a long history

Coptic Christians, the largest religious minority in Egypt, are in the headlines these days in the wake of a deadly attack on one of their churches in Alexandria. About 6,000 Coptic Christians live in Germany. 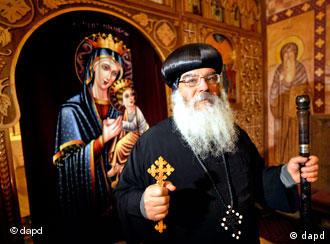 Copts trace their roots back to ancient Egypt

The Copts regard themselves as direct descendents of the ancient Egyptian pharaohs. The word Coptic originally meant ancient Egyptian. One of the first Christian missionaries, Saint Mark, introduced Christianity to Egypt in the first century A.D.

Even back then, the Copts suffered persecution, first by the Romans. In the third century, 800,000 people were killed because of their faith, most of them Copts. 400 years later, Arabs invaded and conquered Egypt, bringing with them Islam. By the 11th century Christianity had spread across the country and half of Egypt's population was Christian. The city of Alexandria with its renowned university was a Coptic spiritual hub. The Copts also created monasticism and still today, numerous monasteries remain of the hundreds that were scattered across the country.

Relations between Christians and Muslims began to deteriorate in modern times. Gamel Abdel Nasser overthrew the Egyptian monarchy in 1952, and became president of Egypt four years later. The Copts were severely affected by Nasser's nationalization policies and as result, many Copts left during those years. 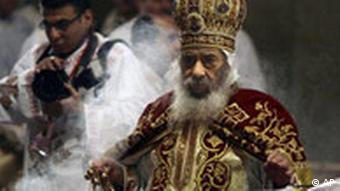 In 1980, Nasser's successor Anwar el Sadat made a fateful concession to hold on to power. He declared Sharia, the law of Islam, Egypt's only law. Not that it did him any good: Sadat was murdered by Islamist officers from his own army.

The current Egyptian President Hosni Mubarak has officially granted the Copts the same rights as Muslims. Mubarak has also named a moderate theologian as the nation's highest Muslim cleric, but Egypt's Christians continue to face resentment in the form of administrative obstacles and unequal treatment.

The Copts maintain that about 20 percent of Egyptians are Christians. According to government figures, they only number about ten percent, or around ten million people.

Shenouda III is the 117th Pope of Alexandria and successor to Saint Mark the Evangelist. He has led the Coptic Orthodox Church since 1971 and supported worldwide Copitc expansion to more than 100 congregations and dioceses, most of them in the US. About 6,000 Copts live in Germany; they have two monasteries in the states of Hesse and in North Rhine-Westphalia. For many, present-day Egypt is no longer an option.

Police step up protection of Coptic Christians in Germany

Coptic Christians across Europe are on high alert as they continue to receive terror threats in the run up to their Christmas celebrations which climax later this week. (04.01.2011)

Hundreds of Christians took to the streets of Alexandria, Egypt, to vent their anger over a deadly church bombing on New Year's Day. Observers say the attack may have been intended to spark a civil war. (02.01.2011)

An apparent Islamist suicide bombing has killed 21 people, and injured dozens more, in Alexandria, Egypt. The EU's top diplomat and Germany's foreign minister condemned the attack on a church during Mass. (01.01.2011)