Police step up protection of Coptic Christians in Germany | Germany | News and in-depth reporting from Berlin and beyond | DW | 04.01.2011

Police step up protection of Coptic Christians in Germany

Coptic Christians across Europe are on high alert as they continue to receive terror threats in the run up to their Christmas celebrations which climax later this week. 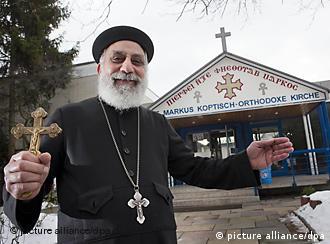 Frankfurt has one of the largest Coptic communities in Germany

Germany's oldest congregation of Coptic Christians is to receive police protection as it celebrates Christmas later this week.

"Police are providing extra protection for the building and the congregation," said Michele Riad, deacon of the 1,000-member Saint Mark church in Frankfurt, having received terror threats.

The church will also get extra protection over the weekend for a memorial service in honor of the 21 Coptic Christians who died when a bomb exploded on New Year's Day in a Church in Alexandria, Egypt.

On Tuesday Coptic Christians in Egypt clashed with police for a third day in a row. The unrest erupted as police in Egypt went on high alert as investigators hunted the perpetrators of the church bombing.

German Chancellor Angela Merkel has meanwhile condemned Saturday's attack in a letter to Egyptian President Hosny Mubarak, saying she felt "horror and revulsion" at the news.

The German Office of Criminal Investigation said that there was a general threat on the internet against Coptic Churches, including those in Germany.

"It's really important that the persecution of Christian minorities gets onto the agenda at international conferences, like the UN," Johannes Singhamme, vice chairman of the ruling Christian Democrat party in Germany.

Around 6,000 Coptic Christians live in communities in Frankfurt, Munich, Bitburg and Hanover in Germany. Their bishop, Anba Damian has reported several threats. He told the radio station Bayerischer Rundfunk that there was a plan circulating on the internet to target Copts on the night of January 7, which is the climax of Christmas celebrations for Orthodox Christians. 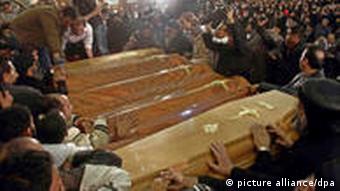 The killing of Coptic Christians has sparked unrest in Egypt

Threats against Copts have also been reported in France, where around 45,000 Coptic Christians live.

The Austrian interior minter, Rudolf Gollia, has spoken of a "death list" containing the names of 150 Copts from different countries, which was published before the attack in Egypt on the internet website for the terror organization "Islamic State of Iraq".

The fatal bombing of a church in Egypt has been condemned all over the world - also by Muslim authorities. But DW's Rainer Sollich, head of DW's Africa and Middle East Program, says condemnations are not enough. (03.01.2011)

German Chancellor Angela Merkel has joined a host of world leaders who have condemned the New Year's Day attack on a Coptic Christian church in Egypt. In Germany, Copts say they feel threatend by Islamists as well. (03.01.2011)