The Cambodian tightrope between growth and conservation | Global Ideas | DW | 29.09.2015

The Cambodian tightrope between growth and conservation

Spanning an area of a million acres, the richly biodiverse Central Cardamom Protected Forest in southwest Cambodia faces all manner of conservation threats. Including the country's economic future. 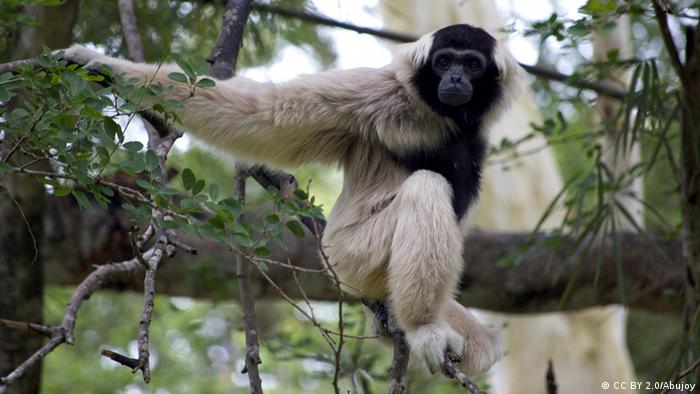 Teeming with endemic species such as the Siamese crocodile, the gibbon, and the dragon fish - which is almost extinct in other Asian countries - Cambodia's Central Cardamom forest is the pride of both the local government and conservationists.

Many of its #link:http://www.conservation.org/projects/Pages/cambodia-central-cardamoms-protected-forest.aspx:environmental success stories# are a result of ongoing initiatives by Conservation International, an NGO that has worked with indigenous groups to ensure they receive health care, teaching salaries, and training in conservation agriculture in exchange for not poaching wildlife or clearing the forest. Nonetheless, the region still faces threats.

"It is important to understand that illegal clearing will remain an issue, as long as high value timber and species trade exists, and until alternative livelihoods can be developed," Tracy Farrell, regional director of the Greater Mekong Program for Conservation International, told Global Ideas.

The Cambodian record of illegal logging began with the Khmer Rouge, the Marxist guerrilla group that lived in the Central Cardamoms in the 1970s, forcing indigenous people off their forest land. Thai businessmen paid the rebels to cut down trees in the region so the lumber could be sold in Thailand. The trade established itself and, outliving the guerrilla movement, continued into the late 1990s, by which time tree stocks had been severely depleted.

What constitutes a threat?

Although it sounds like a dramatic chapter in the forest's life, Timothy Killeen, an environmental scientist who worked in Cambodia for Conservation International and wrote a book on the Central Cardamoms, says illegal logging in the region doesn't pose as great a peril as one might imagine.

"There's never more than 10 or 15 valuable species in a tropical forest," Killeen said. "Take them all out and you still have 500 other species. They're just not valuable. But the forest is still there."

His position might seem controversial, especially given a 2011 article in the Phnom Penh Post that accused Conservation International of turning a blind eye to illegal logging in the protected forest. Although officials from the NGO insist they did not condone the unlawful clearings, Killeen says the question of how logging endangered the forest is more nuanced.

"Poor people going into the forest and chopping the tree into pieces and carrying it out on their backs is never going to get to the point to be a significant threat to the forest," he said. "The level and the intensity of illegal logging is so low because of the nature of it." When one tree is cut, often another grows back.

Illegal logging on the scale Killeen describes doesn't decimate forest land in one fell swoop. Slash and burn agriculture, on the other hand, clears the land in its entirety.

While Farrell says communities are encouraged not to clear more land than officially agreed, destructive agricultural practices still occur near the border of the Central Cardamoms - slowly chipping away at forest's fabric.

Just as with the illegal logging that supplied Thailand with certain woods, the emergence of slash and burn agriculture in Cambodia is connected to the Khmer Rouge. The Central Cardamoms were one of the rebels' last strongholds, and they removed people from the area and burned their land records.

When the Marxist group was defeated, Cambodians migrated back into the region as squatters. By 1998, the government had formalized land ownership, but often at the expense of the poor whose #link:http://news.mongabay.com/2011/03/cambodians-prevented-from-protesting-destruction-of-their-forest/:land was sold to businessmen# who acquired 90-year land concessions to grow thousands of hectares for sugar-cane, rubber, and controversial palm oil.

As destructive as growing monoculture crops like palm oil can be to the environment, Tim Forsyth, a professor of environment and development at the London School of Economics, says there is another problem.

"I would say the biggest threat at the moment, which has been the biggest threat for 20 years, is the conversion of average quality forests and agricultural lands into monoculture industrial tree plantations," Forsyth said. "People are rushing around planting trees because they think it is good for the environment."

He says people in the region tend to believe more trees encourage water production. But that is misguided. Leaves of teak trees, for example, are so large that when it rains they form bigger water droplets, which are harder for the soil to absorb. And good soil quality, in turn, is essential for hydroelectric power - an energy source seen as crucial for Cambodia's growing commercial sector.

With the average annual power consumption in the country expected to almost triple by 2024, Chinese companies plan to build more dams in the country, having already constructed 10 near the Central Cardamom Protected Forest and one inside the conservation zone. The productivity of these dams, Killeen says, is also dependent on soil quality. Preventing massive deforestation of endemic trees is vital to keeping the soil in place.

"If your reservoir fills up with silt, you have less water, less energy, less income," he said. "It's a straightforward economic argument for making sure the watershed above the dam is protected because it increases the economic lifespan of those infrastructure assets."