Thailand NGOs: Transparency bill could ′shut down′ civil society | Asia | An in-depth look at news from across the continent | DW | 29.04.2021

The Thai government is seeking to pass legislation targeting nonprofits in the name of transparency. Activists, however, have slammed the proposal, saying it is designed to stifle civic freedoms and punish dissent. 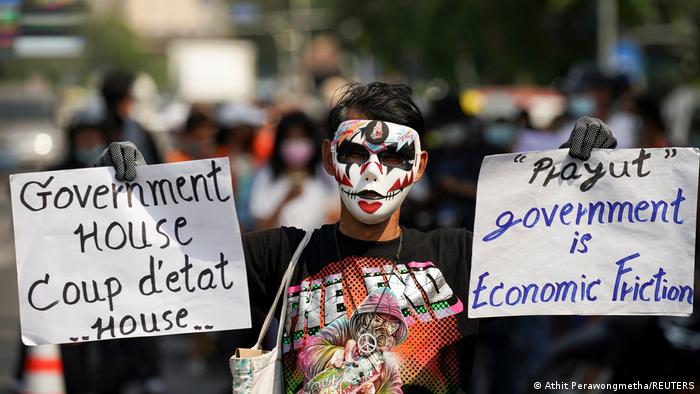 Thailand has a 'military government dressed up as a civilian government,' critics say

If passed, the legislation would require any civil society organizations to register with the Interior Ministry, declare the sources of their annual operational funds, and disclose their audited financial reports.

Deputy government spokeswoman Rachada Dhnadirek justified the law as a mechanism intended to "promote transparency and accountability" of nonprofits, "not to stifle their activities."

According to Dhnadirek, there are a large number of NGOs in Thailand but only 87 have been registered, which keeps the government from overseeing them.

Amnesty International has slammed the draft law. The organization says it would grant Thai authorities sweeping new powers to place restrictions on foreign funding and the NGOs' activities, order surveillance and searches of NGOs' office and its members without judicial oversight.

Josef Benedict, a researcher at the global civil society alliance CIVICUS Monitor, told DW the law is "another attempt by the Thai government to restrict or shut down critical civil society groups by introducing arbitrary requirements, squeezing their funding sources and creating a hostile environment for them to operate."

Benedict denounced Bangkok's latest measure as an effort to "silence criticism of the state."

"Authorities have escalated their crackdown on student-led pro-democracy protests, and attempted to muzzle the media and silence online criticism," he added, referring to Thailand's youth-led demonstrations over the last year.

Aside from its broad scope, the legislation’s imprecise language is also cause for alarm, Benedict says.

Section 5, for instance, requires NGOs to "act in compliance with the criteria, methods and conditions" prescribed by a government minister.

"None of the criteria, methods, or conditions are specified or defined, leaving this provision open to interpretation and subject to arbitrary application by authorities," Benedict stressed.

The Geneva-based International Commission of Jurists (ICJ) condemned the speed with which the legislation was pushed.

The Thai Cabinet approved the bill on February 23. A public consultation on it was then conducted between March 12 and 31, a timeframe the ICJ criticized as "considerably tight."

Emerlynne Gil, Amnesty International’s Deputy Regional Director for Research, warned that the law could also be used to target a wider range of groups that could be potentially defined as nonprofits.

It would give Thai authorities the "power and discretion to enforce provisions arbitrarily and with discrimination to those with opposing views to the government," Gil said.

For Brad Adams, the director of Human Rights Watch’s Asia Division, the legislation is just the latest attempt by the Thai government to crack down on dissenting voices and trample free speech.

"Instead of realizing that they are unpopular because they have killed democracy, and young people fear for their future, the government thinks if it silences NGOs, their problems will go away. They are wrong," Adams told DW.

Since then, civic freedoms and fundamental rights have become increasingly limited in the Southeast Asian country, such as the enforcement of restrictive laws including sedition and lese-majeste ruleswhich shield the kingdom's powerful King Maha Vajiralongkorn and the royal family from defamation.

Thailand's governing authorities are a "military government dressed up as a civilian government," Adams said.