Coronavirus: Bangkok′s backpacker strip stares at uncertain future | Asia | An in-depth look at news from across the continent | DW | 22.12.2020

The COVID-19 pandemic has dealt a severe blow to bars and pubs in the Thai capital's once-bustling Khaosan Road. Devoid of foreign tourists, they're facing grim prospects. 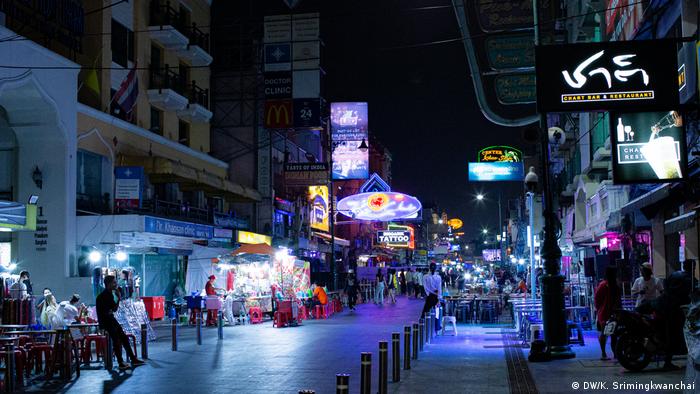 Khaosan Road, famously known as a backpacker's haven, used to be bustling with international tourists day and night, but with borders closed, the strip's nightlife is now a quiet shadow of its former self.

When the owners of Golf Bar, one of the street's most popular spots, decided to close down temporarily in mid-March because of construction work in front of the bar — part of an effort by the city to turn the 410-meter stretch into a more upmarket tourist attraction — they did not expect the one-week closure to turn into nearly four months.

After reopening in July with the country's borders closed, Golf Bar was forced to refocus their business, which relies heavily on foreign tourists, to stay afloat. "We now cater to local tastes and play more Thai and K-pop songs (...) and if we see that there won't be any more customers, we would already start closing around midnight," Boonpatcharee Saengthongwirakun, one of the bar owners, told DW.

In pre-COVID days, it was not a rare sight to find Golf Bar's crowd extending out into the street and even neighboring bars. Today, however, the bar only sees a full house on some isolated weekends.

"There are barely any casual customers on Khaosan Road these days. Those bars that manage to survive now rely on their regular customers," Thanachot Parmthunyakijkul, the other Golf Bar owner, told DW. He also added that the bar's revenue has dropped by around 80% since the pandemic began. 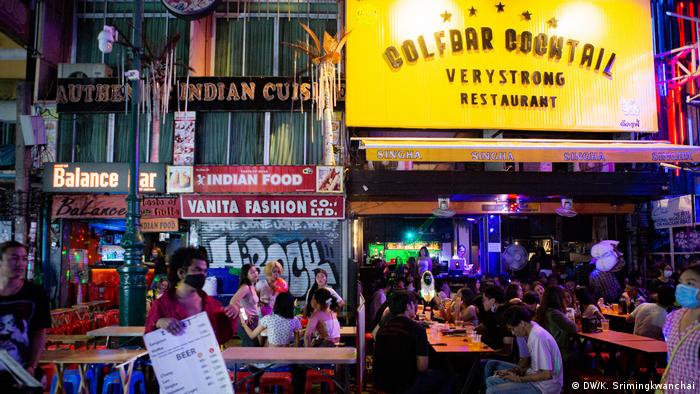 Concern for the future

The owners of Golf Bar admitted that they are now living month to month and are afraid of going out of business as a result of the pandemic after more than 20 years of serving drinks to partygoers from all over the world.

"On some days, from 6 pm to midnight, we only sell one bottle of water or even nothing at all," said Thanachot, adding that, pre-COVID, the bar used to be open almost 24 hours a day.

Golf Bar is no exception. Pubs and bars that previously relied on foreign tourists and walk-in traffic face grim prospects, even after lockdown measures were lifted in July.

Last year, Bangkok welcomed around 22.8 million visitors and was the world's most-visited city for the fourth consecutive year, according to Mastercard's 2019 Global Destination Cities Index.

"Those with Thais as their target customers have managed to bounce back easily but those that had never tried drawing in locals had to start adapting and promoting themselves on social media," Suriyain Phongitthidej, admin of the local Facebook group Khaosan Society, told DW.

"Khaosan did not need to rely on social media because businesses here had a high volume of walk-in traffic anyway," Suriyain added.

Golf Bar is among those businesses that have ramped up their online presence during the pandemic in a bid to attract new customers.

First Cafe, a former bag shop which was converted into a bar during COVID-19, is one of the newcomers to Khaosan's erstwhile lucrative nightlife scene. 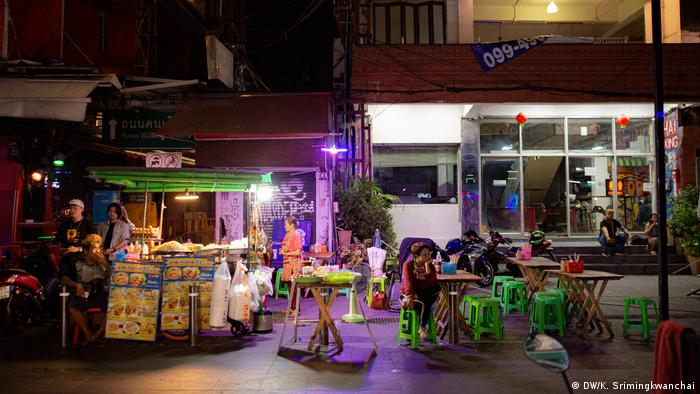 "My boss decided to change the business model and opened this bar when the pandemic hit before I joined, but it was at the wrong time. We have been in the red. The DJ and other employees have to be paid but we generate little revenue," Sombut Mutaphon, the mastermind behind First Café's strategies, told DW.

"That said, when Thailand opens the borders, this bar would definitely rake in at least 150,000 baht per day. But for now, we have to persevere," Sombut added.

Businesses on Khaosan saw a jump in income during Halloween when the world-famous strip officially reopened after the multimillion-dollar facelift.

But their hopes of repeating that success during New Year's Eve — another traditionally lucrative period — have been dealt a new blow amid a sharp rise in COVID-19 cases following an outbreak at a shrimp market in Samut Sakhon, a province southwest of Bangkok.

Generally, Thailand has fared well in containing the novel coronavirus but the latest outbreak — which officials have avoided calling a full blown second wave — is likely to cast an even longer shadow over these Khaosan bars' chances of survival.

For many people, getting over the initial coronavirus infection is just the beginning. The list of possible long COVID symptoms is getting longer, and suffers are increasingly coming together to share their experiences.