Thousands of protesters took to the streets in Bangkok for a fourth consecutive day — defying an emergency decree banning public gatherings. Demonstrators are calling for the country's PM to quit and a reformed monarchy.

The protesters used social media to arrange assemblies before police had time to block them. Authorities threatened legal action against Twitter and Facebook accounts that announced the protests, however fresh calls to action were posted on Saturday despite the state of emergency.

The determined, youth-led protest movement is calling for Thai Prime Minister Prayuth Chan-ocha to step down, the nation's monarchy to undergo reform and the constitution to be amended to make it more democratic. 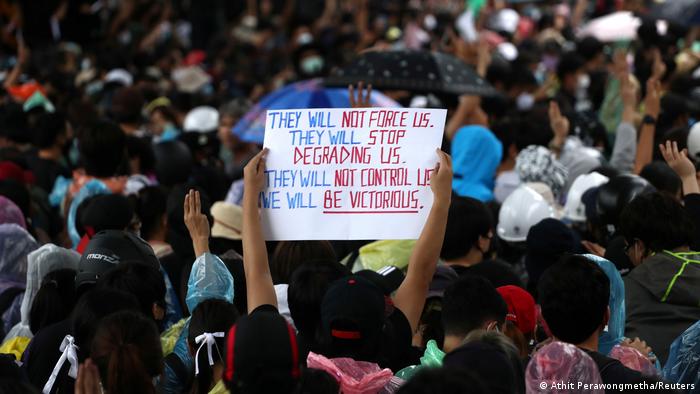 In an attempt to stay ahead of authorities, protest organizers advised followers to gather at stations outside the city center, where access was easier.

Hundreds gathered on Saturday in Bangkok's northern Lat Phrao district with helmets and gas masks, raising a three-finger salute adopted from the "Hunger Games" films as a symbol by the movement.

Nearly a thousand protesters rallied in the western Wongwian Yai district chanting: "Long live the people, down with dictatorship!"

The law gives authorities the power to restrict access to areas deemed off-limits. Police have meanwhile issued arrest warrants for more than 60 protesters, according to Thai Lawyers for Human Rights.

"We are calling on the government to ensure that no one is targeted, detained or charged with serious offenses for exercising their fundamental rights to freedom of peaceful assembly and expression," UN High Commissioner for Human Rights Ravina Shamdasani told reporters.

"Be prepared both physically and mentally for the demonstration and to cope with a crackdown if it happens," an online post from one of the pro-democracy movement's main organizing groups, Free Youth, said.