The Thai navy has pushed a boat with at least 300 migrants on board back out to sea - after giving them supplies. Authorities in Thailand have decided against a plan to set up official camps for the migrants. 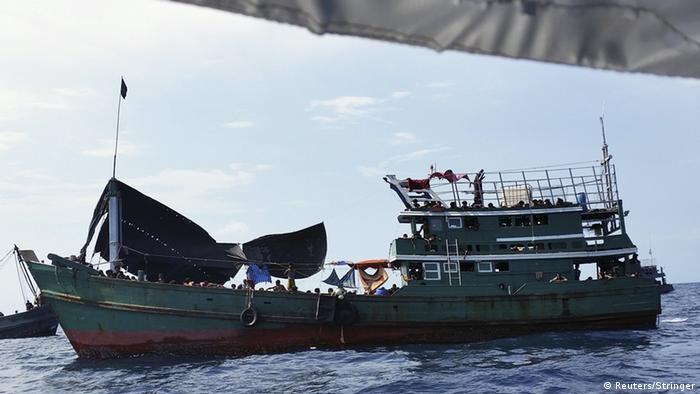 The boat, carrying about 300 people on board including young children, was reported to have left Thai waters early on Friday bound for Indonesia.

Thai officials said they had fixed the boat's engine and given food, water and medicine to those on board, in accordance with Thailand's policy of "helping on" such vessels.

"We gave them ready-to-eat meals," Satun provincial governor, Dejrat Limsiri, told the AFP news agency. "They are now out of Thailand territory ... they will try to go to Indonesia as it seems they cannot get to Malaysia."

The boat had been found drifting in Thai waters on Thursday, with some 300 people on board - mainly from the persecuted Rohingya people of Myanmar. A Thai naval helicopter dropped food packages into the sea, with some men diving into the sea to retrieve them and eating raw noodles as they swam back to the vessel.

Limsiri said the migrants did not want to enter Thailand, where they would face legal action and be returned to Myanmar. Some have been targeted by traffickers in Thailand and kept in camps where they are held to be ransomed back to their families. The stateless Rohingya are denied citizenship in their native Myanmar, where they face persecution from both the army and extremist Buddhist mobs who chase them from their homes and lands.

Passengers told reporters who drew up in a boat alongside that 10 people had died and their bodies had been thrown overboard. A migrant also told reporters the aim was to reach Malaysia.

More than 120,000 members of the intensely persecuted Rohingya minority have boarded ships to flee to other countries in the past three years. Amid a recent crackdown by authorities on traffickers, many have been abandoned at sea.

Even if they reach Malaysia, the Rohingya are unlikely to receive a warm welcome with the country - and Indonesia - vowing they will not be allowed to enter.

"What do you expect us to do?" asked Malaysian Deputy Home Minister Wan Junaidi Jafaar in comments reported by the AP news agency. "We have to send the right message," he said, "that they are not welcome here."

Malaysian officials were on Thursday reported to have turned away two boats carrying more than 800 migrants.

Thousands of Rohingya and Bangladeshi migrants en route to Malaysia have been left stranded at sea after Thailand's crackdown on human trafficking. But why have so many chosen Malaysia as their destination? DW examines. (13.05.2015)