Pushed back - Malaysia refuses safe haven to abandoned refugees | Asia| An in-depth look at news from across the continent | DW | 13.05.2015

Thousands of Rohingya and Bangladeshi migrants en route to Malaysia have been left stranded at sea after Thailand's crackdown on human trafficking. But why have so many chosen Malaysia as their destination? DW examines. 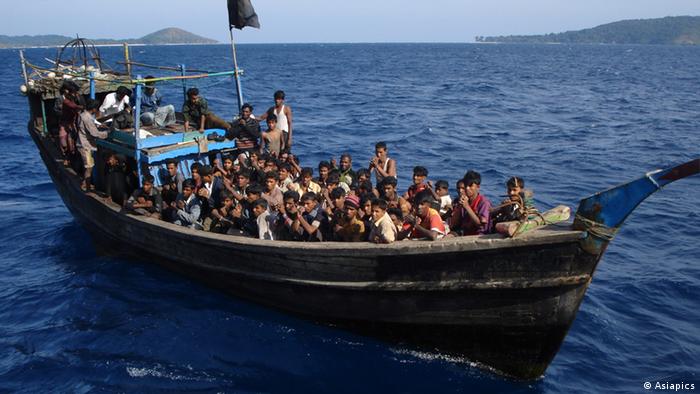 Concerns are mounting for thousands of migrants reportedly abandoned on the seas between Thailand, Malaysia and Indonesia as regional authorities seem keen on enforcing a policy to push boats back despite appeals by the UN and rights groups for a rapid rescue operation to avoid a humanitarian crisis.

"We won't let any foreign boats come in," Tan Kok Kwee, first admiral of Malaysia's maritime enforcement agency, told reporters. If the boats are sinking, they would rescue them, but if the boats are found to be seaworthy, the agency will provide "provisions and send them away," he said.

The policy involves offering food, water, fuel and medical assistance to the boats but preventing them from landing. On May 11, the Indonesian Navy towed a boat carrying hundreds of Rohingya from Myanmar out to the open sea.

The move comes after rickety boats carrying more than 2,000 migrants from impoverished Bangladesh and Myanmar washed to shore in Indonesia and Malaysia over the weekend. Their vessels were reportedly abandoned by people smugglers, leaving the hungry and desperate migrants to fend for themselves for days.

Most are trying to reach Malaysia but recent the crackdown against human traffickers in Thailand, which has long been considered a regional hub for human trafficking, has made traffickers reluctant to bring people ashore, thus putting migrants at even greater risk. 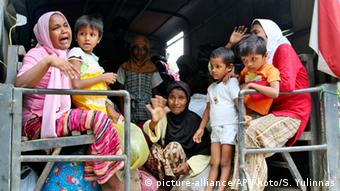 Thousands of migrants are believed to be stranded on the seas between Thailand, Malaysia and Indonesia

The Arakan Project, which monitors the Rohingya refugee situation and maritime movements in Bangladesh, fears that up to 8,000 migrants are currently stranded at sea.

According to the International Organization for Migration (IOM), any delays in the migrants' journey result in more distress. About 1.8 percent of migrants suffer from beriberi, which is a thiamine deficiency. Another 2-4 percent are severely malnourished and 40 percent are undernourished.

"On top of that, the boats are brutal. People are packed in, unable to move, with limited bathroom access. Water supplies can get contaminated with fecal matter, sea sickness can cause quick dehydration," the IOM's Jeffrey Labovitz, Chief of Mission in Thailand, told DW.

Many of the migrants are believed to be Rohingya, a stateless Muslim minority from Buddhist-majority Myanmar described by the United Nations as one of the most persecuted minorities in the world. Myanmar views its population of roughly 800,000 Rohingya as illegal Bangladeshi immigrants.

Most of them are not citizens and outbreaks of sectarian violence have prompted many to flee. "An entire population feels their only option is to seek asylum by sea," Matthew Smith of Fortify Rights told DW.

IOM: Up to 8,000 Rohingya and Bangladeshi migrants stranded at sea

After boats carrying more than 2,000 migrants washed to shore in Indonesia and Malaysia, the IOM's Jeffrey Labovitz tells DW he fears thousands of other refugees are adrift off the Thai coast as smugglers refuse to land. (12.05.2015)

The figure of Rohingya trafficked in Thailand since 2012 could be as high as a quarter million. The UN Refugee agency estimates that some 25,000 Rohingya Muslims and Bangladeshis boarded people smugglers' boats in the first three months of this year.

For many of them the destination of choice over the past years has been Malaysia. "Seeking to flee discrimination, the Rohingya usually contact a broker who deceives them to think they will be taken directly to Malaysia for the equivalent of up to $200," says Smith.

"The price increases significantly - in some instances to as much as $2,000 - once Rohingya are in the custody of human traffickers and facing abuse," he added.

Once in Thailand, many Rohingya are forced to cross the country using vehicles run by the smugglers, who hold them in captivity in squalid jungle camps until a ransom is paid by their family back home. In fact, the trigger for the Thai government's crackdown on human traffickers was the recent discovery of several mass graves in trafficking camps located in remote jungles close to the Malaysian border.

But why undergo such an ordeal to reach Malaysia? Besides being a Muslim-majority country, the main reasons as to why many view Malaysia as a key destination are primarily economic.

Gerhard Hoffstaedter, senior research fellow in Anthropology at The University of Queensland in Australia, recently wrote in The Conversation that the sea journey from Bangladesh to Thailand and the onward overland trek through the jungle to Malaysia has been a popular and affordable way for many Rohingya to make it to protection space that has given most a way to survive and some the means to prosper.

"I recently talked to a family who arrived in Malaysia with nothing only a few years ago. Today they run a neighborhood grocery store and are able to send all their children to a school, albeit a refugee school that does not offer certificates," said Hoffstaedter.

Jahabar Sadiq, chief editor of The Malaysian Insider news portal, explains that there are nearly one million Bangladeshis working in Malaysia, many of them undocumented or who have stayed beyond their work visa duration, and are technically not allowed to work.

Most do manual labor and find work mainly in the plantation and construction sector with some in the services sector, sending back much needed foreign exchange to the South Asian nation.

Malaysia has one of the world's largest urban refugee populations, including more than 100,000 Rohingya. Most Malaysians are tolerant of migrants who make up a significant proportion of the nation's population, said Jahabar. At the same time, he added, the Rohingya, who have been coming to the country for the past three decades, can easily integrate. "They share the Islamic faith and many have inter-married with the locals and some have managed to get the citizenship."

The journalist points out, however, that Malaysia treats most Rohingya as illegal migrants even though the UNHCR has given them refugee cards. As a result, many live without any official status in their own communities and work cheaply for local businesses without much interaction with locals.

Fortify Rights have also documented cases of extortion by Malaysian police, exploitation by predatory employers, and other abuses. There are also reports that protection mechanisms in Malaysia are not strong for undocumented workers and some Rohingya have ended up in "slavery-like conditions." 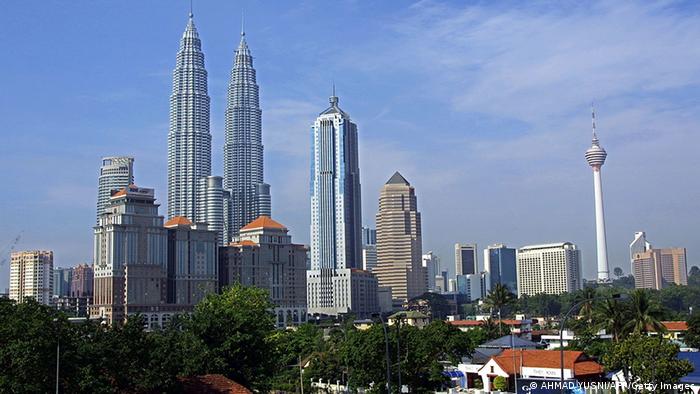 Despite these risks and limitations, many Rohingya seem to view Malaysia as a more attractive destination than, say, neighboring Indonesia. "In Indonesia, there are neither jobs available nor the networks to facilitate the movement of people.

Most of the Rohingya who have traveled to Indonesia do not see it as a destination, but as a jumping off point to get to Australia, which has maintained a very hard-line on illegal immigrants, recently towing refugee boats back to the high seas," Zachary Abuza, an independent Southeast Asia analyst, told DW.

Jahabar has a similar view: "It is an economic issue for most, rather than seeking asylum from persecution. The other reason is these migrants feel Malaysia has a more humanitarian approach to them than Indonesia.

Analyst Abuza explains that one reason for them being tolerated is that as a middle income country, Malaysia is highly dependent on cheap unskilled workers. "There are entire sectors of the economy that the increasingly urban middle class wants no part of including, construction, roadwork, rubber and palm oil plantations as well as domestic work."

Another reason seems to be that there is genuine sympathy in Malaysia for the plight of the Rohingya, especially following the horrific sectarian conflicts in Myanmar's Rakhine State, which have been a hot-button issue in Malaysia. "Malaysia often tailors its foreign policy to assist fellow Muslims and for many years the country was playing a leadership role in negotiations with the government in Napidaw," said Abuza.

Malaysia has formally asked the ten-member Association of South East Asian Nations (ASEAN) to recognize the Rohingya situation. However, Naypyidaw has blocked attempts to discuss the issue at a regional level, leaving the issue unresolved to this day. And now that the migrant crisis has reached a new level, it seems that Kuala Lumpur alongside other Southeast Asian governments have little appetite to provide a sanctuary for thousands of desperate migrants. 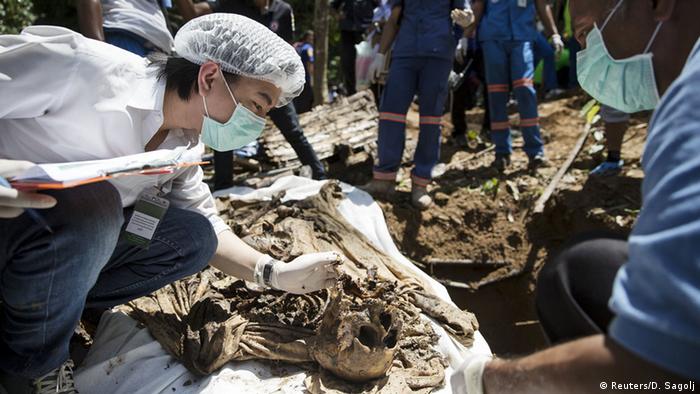 Thailand has called for a regional summit on May 29 to address the unfolding crisis, but many observers fear any response could come too late for those currently stranded at sea. "This is a grave humanitarian crisis demanding an immediate response," said Smith. "Lives are on the line. Regional governments should act decisively to rescue and protect asylum seekers and trafficking survivors, not drive them back out to sea."

Rights groups have called on all three countries to open their borders to asylum seekers and provide survivors with access to asylum procedures, protection from detention and forced returns, and freedom of movement.

The Rohingya situation is bound to be a major regional issue until there is a durable political settlement in Myanmar. However, it seems unlikely that it will be resolved in the near future, say experts: "This requires a regional solution, and at its heart it requires citizenship and protection of legal and civil rights in Myanmar. However, I just don't see that happening any time soon," said Abuza, who added that until then: "it will be business as usual for the traffickers after public scrutiny diminishes."