Thai police crack down on camps used by human traffickers

Authorities in Thailand have intensified their operations against human traffickers trading in refugees from Myanmar and Bangladesh. The move was sparked after the discovery of a mass grave in southern Thailand. 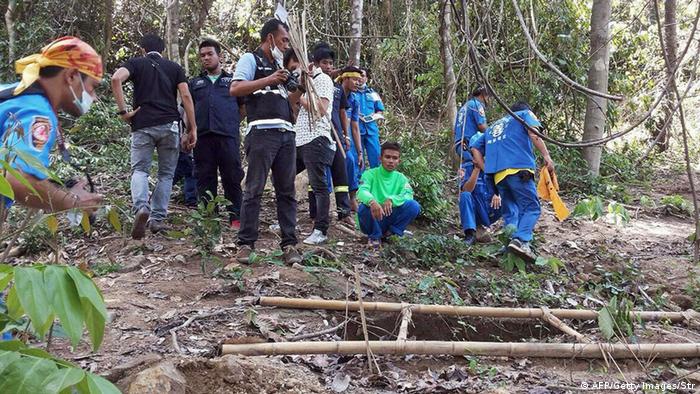 Police in Thailand arrested 10 suspects and promised to wipe out camps set up by human traffickers after a mass grave was discovered in the country's south nearly a week ago. The victims were believed to be migrants from Myanmar and Bangladesh.

More than 50 police officers in Padang Besar had already been charged for turning a blind eye to the situation.

Police forces were working to clear up the smugglers' setup within 10 days, following an order by the Prime Minister Prayuth Chan-ocha, according to Somyaot Poompanmoung, the national police chief. "I will not allow these kinds of camps to exist in Thailand," he told reporters.

The crackdown began last week, after authorities discovered 26 bodies in a mass grave near Padang Besar in southern Thailand. In the last two days, police reported finding more two more spots where smugglers had hidden their victims. Around 54 people, also believed to be Rohingya were found in Satun province and five others escaped from a smuggling camp, the Migrants Working Group told AFP.

Human trafficking is a delicate subject in Thailand ever since the US Department of State downgraded it to the lowest rank in a survey of countries working to eliminate human trafficking last year.

There were also doubts as to whether the trafficking racket had spread beyond the Thai border after Malaysian NGO Tenaganita reported receiving information on migrant workers going missing.

Although Kuala Lumpur officially denied any evidence of Malaysian involvement, anti-trafficking group Freeland Foundation revealed traffickers were demanding around $3,000 (2,660 euros) per migrant as ransom or selling them for $1,000 to work on plantations in Malaysia, where thousands of foreign migrants work almost as slaves, unable to pay back their recruitment fees.

Bangladeshi migrants and Rohingyas, considered one of the most persecuted ethnic groups in the world, have been leaving Myanmar in large numbers to look for better economic opportunities and escape religious and ethnic persecution. Many of these are tricked by smugglers and sent to Thailand, Malaysia or even farther to work as laborers.