A gunman opened fire inside a Baptist church in Texas, killing at least 26 people attending a service, including children. US President Donald Trump has said the shooting is a "mental health problem," not a gun issue. 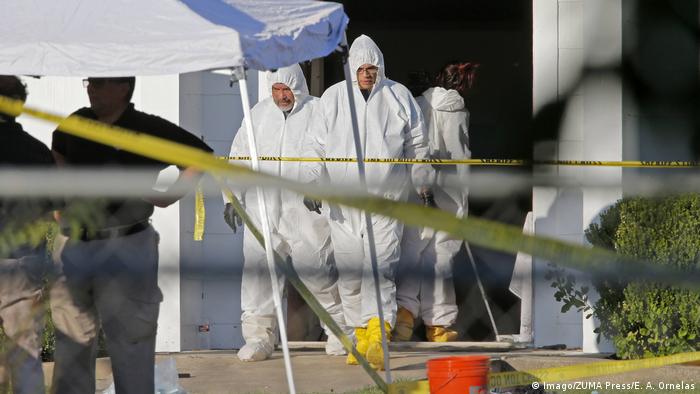 The shooting at the First Baptist Church of Sutherland Springs, Texas, during a church service on Sunday left 26 people dead and 20 others injured.

On Monday, Texas officials told reporters that four of the wounded are in serious condition, 10 in critical condition and remaining six are stable.

Texas Governor Greg Abbott said the attack on the church about 30 miles (48 kilometers) southeast of San Antonio was the "largest mass shooting in the state's history."

Officials identified the suspect as 26-year-old Devin Patrick Kelley during a press conference on Monday.

An Air Force spokeswoman said Kelley had been discharged in 2014 after being found guilty of assaulting his wife and child. Despite the verdict, the Air Force failed to follow defense department procedure and report Kelley's criminal history to a federal database used for background checks on people wishing to buy a gun.

Officials said the shooter's motive was "domestic" and that his mother-in-law, who attended the church, received threatening text messages from the shooter.

"This was not racially motivated. It wasn't over religious beliefs. It was a domestic situation with the in-laws," Freeman Martin, regional director of the Texas Department of Public Safety told reporters.

Abbott previously described the attacker as "a very deranged individual."

Authorities said they uncovered a Ruger AR-556 assault rifle at the church and two additional handguns in Kelley's vehicle.

An official with the Bureau of Alcohol, Tobacco, Firearms and Explosives (ATF) said the suspect purchased all of the firearms. He added that officials are working to determine whether Kelley was dishonorably discharged from the Air Force — a distinction that would have barred him from purchasing firearms.

Police have been studying social media for posts made by the suspect in the days before the attack, including one that appeared to show an AR-15-style semi-automatic weapon.

It is not yet clear whether the shooter died due to a self-inflicted gunshot wound or the injury sustained by the local resident.

The dead include the 14-year-old daughter of Pastor Frank Pomeroy. He said he and his wife, Sherri, were out of town and not at the church service.

"We lost our 14-year-old daughter today and many friends," Sherri Pomeroy wrote in a text message to The Associated Press. "Neither of us have made it back into town yet to personally see the devastation. I am at the Charlotte airport trying to get home as soon as I can."

Witnesses said the morning church service was usually attended by about 50 people. Emergency personnel quickly rushed to the scene, with some victims evacuated by helicopter.

Speaking in Japan on a 12-day trip to Asia, US President Donald Trump described the shootings as an "act of evil" in a "place of sacred worship."

After expressing the heartbreak felt by the American people, Trump went to say the issue was not gun control, but mental health.

"We have a lot of mental health problems in our country, but this isn't a gun situation," he said.

On Sunday evening hundreds of people, including Governor Abbott, gathered outside the church for a prayer vigil.

The mass shooting comes just over a month after a gunman in Las Vegas fired down from a hotel room on a concert crowd, killing 58 people and wounding hundreds more.

The shootings quickly reignited a decades-long national debate over whether easy access to firearms was contributing to more atrocities.

Among those to comment on social media was Massachusetts Senator Elizabeth Warren, who said: "How many more people must die at churches or concerts or schools before we stop letting the @NRA control this country's gun policies?"